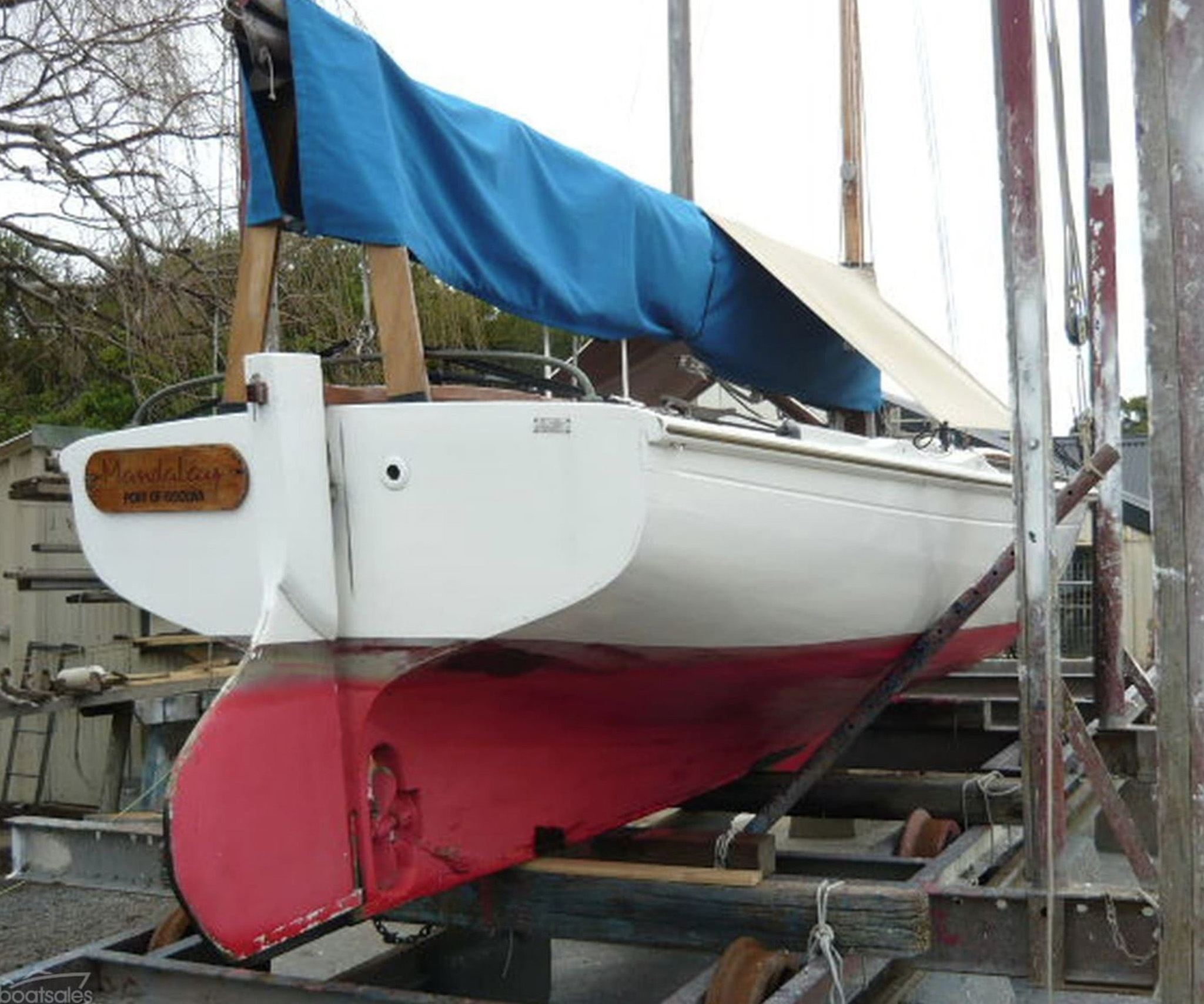 Early Years
Mandalay, formerly named Longa and later, Chloe, was built in 1935 at 20 foot in length. It is possible the builder was Ken Lacco of Rosebud, Victoria, but the name of the first custodian is not known.

Custodian: George Mappleston; c1935 – 1985
It is believed that Longa operated as a fishing boat out of San Remo on Phillip Island in Victoria over many decades, but details about her as a working vessel in that time are scant.  In the latter part of that period, she was owned  by George Mappleston who lived in Newhaven, Phillip Island.

Custodian: Steve Wirtz; 1985 – Early 1990s
In 1985, Steve Wirtz of Sorrento purchased Longa and renamed her Chloe, after his grandmother. Chloe was the first of three Couta Boats that Steve would eventually own. At the time of purchase she still had the canvas lug sail, indicating that her rigging may not have been updated for some years.

Soon after the sale, Chloe was restored by Joe Pompei and Steve at Pompei’s boatyard in Mordialloc, Victoria. In subsequent years, Jack Pompei also undertook some of the necessary maintenance on Chloe.

Custodian: Richard Hart; 2006 – 2010
Chloe was sold in 2006 to Richard Hart, a senior pilot at Port Phillip Sea Pilots in Queenscliff, who relocated her to the northern end of Port Phillip. For the first few years, Richard kept Chloe on a swing mooring at Hampton in bayside Melbourne and used the boat for family recreational sailing and fishing. She was his first foray into Couta Boat sailing.

When she was in need of some underwater maintenance, a mutual friend suggested to Richard to contact Port Melbourne fisherman, Dugga Beazley, who knew all manner of things about Couta Boats.

Richard took Chloe to St Kilda single-handed on a very windy day and was somewhat nervous about crashing the jibboom into the pier. After two attempts by Richard at lining her up to come along-side the pier, Dugga, with tongue in cheek, suggested that a tugboat would do the job! To Dugga’s consternation, her motor didn’t run well, and he discovered that the propeller was covered in barnacles!

Richard changed Chloe’s sails from white to a distinctive red and these sails remain on her today.

Custodian: Chris Harris; 2010 – Present
Chloe, now known as Mandalay, was sold to Chris Harris  in 2010. At the time she was moored at Williamstown on Port Phillip, then taken to Goolwa, South Australia where she was sailed regularly in the Goolwa Vintage Boat Club. She won numerous trophies in Goolwa, including the Governor’s Cup at the 2013 Wooden Boat Festival. In 2015, she was awarded Best Traditional Yacht at the South Australian Wooden Boat Festival.

Mandalay had a major refurbishment in 2015. Then in 2019, she underwent further refurbishment and was fitted with new rigging. In early 2020, Mandalay was sold to Tom Peddie from Portland, Victoria.

Custodian: Tom Peddie; 2020 – Present
As a Portland local, Tom is well aware of the contribution that Couta Boats have made to the Victorian fishing industry. He has always loved the lines of the boat and desired to acquire one, when the time was right. Tom was given a traditional wooden boat that once was owned by Fletcher Jones, however, he did not have the time to restore it, so he searched for a Couta Boat that was in good condition. And so he purchased Mandalay.

Mandalay is now berthed in Portland Marina, near the historic Ariel C23 and Rosebud C23, and is sailed regularly by Tom and his growing family. His children are becoming competent sailors; his son, in particular, loves fishing and regularly accompanies his Dad fishing for barracouta in Portland Bay, on the south-west coast of Victoria.