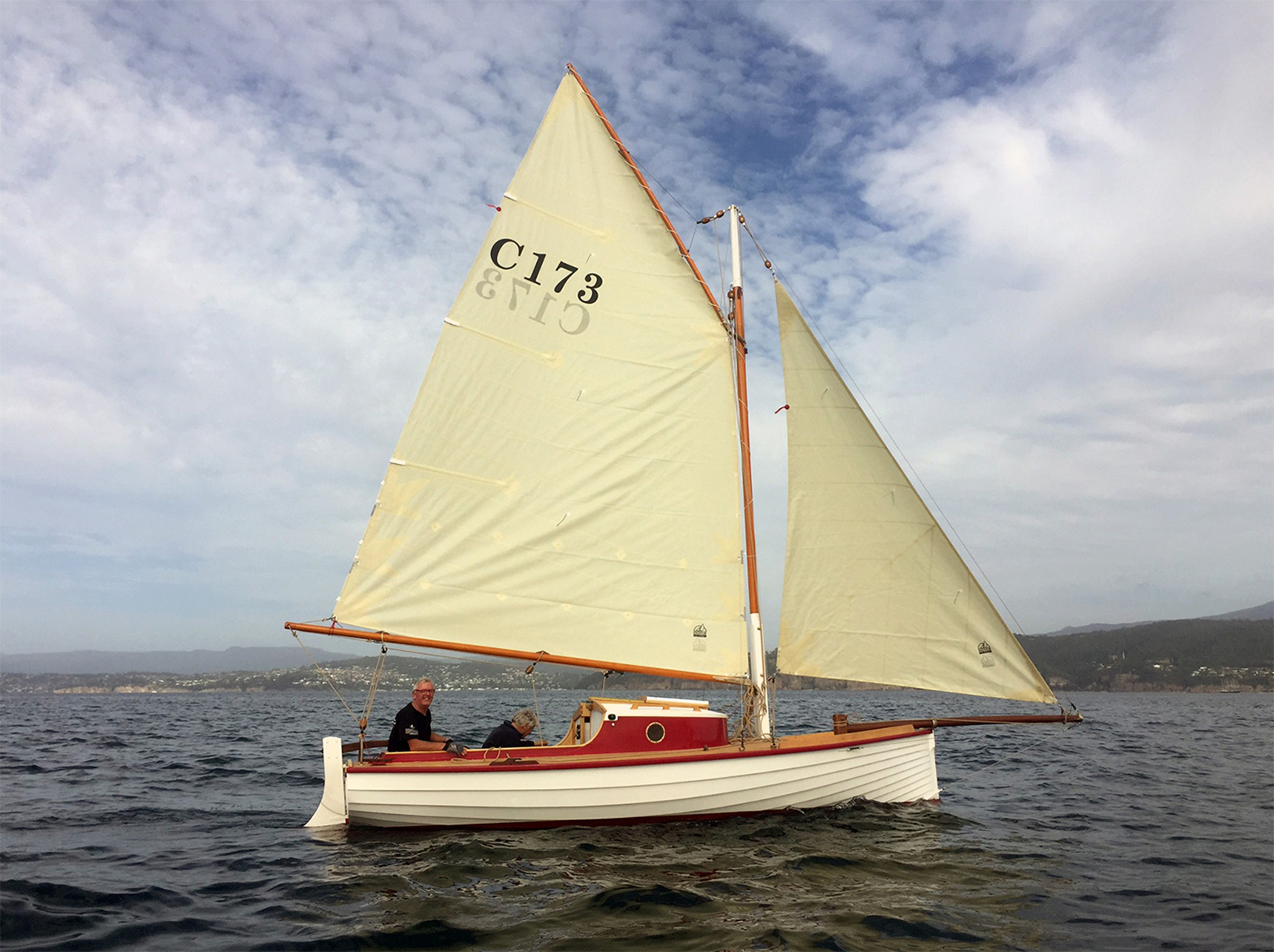 Custodian: Steve Wirtz; 2016 – Present
Majeure was commissioned by Stephen (Steve) Wirtz in 2016 and designed and built by Jeremy Clowes at his boatshed in Cygnet, Tasmania and launched in 2017.

Steve had previously owned Claire C154 which he sailed regularly at Sorrento, but he decided that a smaller open boat might be more conducive to solo sailing. His original concept was to build an open 18 foot Lorne style clinker version with a very plum stem and cockpit, in which he could easily move around. He altered his plans to extend the length and include a cabin, resulting in a cruising Couta Boat. Majeure was built at 19 foot 2 inches.

Steve selected Cygnet Wooden Boats, Cygnet, Tasmania to undertake the build. Jeremy Clowes completed his apprenticeship at the Wooden Boat Shop (WBS) in Sorrento, Victoria so he was highly proficient in the design and construction of Couta Boats.

For the construction, Jeremy found a plentiful supply of New Zealand Kauri at Lymington, five kilometres south of Cygnet, Tasmania. The timber had been in storage for 30 years, intended by the owner to be used in the construction of a 50 foot Herreshoff. In order to purchase the timber, the owner had to buy the land in New Zealand to access the Kauri and then have it milled and shipped to Lymington. The Kauri was used for the planking, the ribs and deck were built of Celery Top Pine, and the mast and spars were carved out of Oregon.

While the construction was in progress, Steve selected a suitable name for the new vessel. When asked why he called the boat Majeure, his response was:

It rolls off the tongue well; and then there is the connotation – it is a term used in contracts – the ‘force majeure’ always wins!

The construction of Majeure took approximately nine months, and during this period Steve travelled to Cygnet periodically to check on the work-in-progress. In these visits, Steve increasingly became drawn to the environs of Cygnet and the surrounding region, which resulted in the purchase of some property. In addition, Steve became involved with the Living Boat Trust at Franklin, which aims to preserve wooden boat-building traditions by assisting people to build or restore their own wooden boat. To coincide with the biennial Australian Wooden Boat Festival in Hobart, the Living Boat Trust organises the Tawe nunnugah (The Raid), which is an annual 10 day small boat expedition from Recherche Bay in far south Tasmania to Hobart.

Majeure was launched early in 2017 from Robleys Point, the current location of the Port Cygnet Sailing Club and slipway and once the site of the historical Wilson’s boatyard. Immediately after the launch, Steve entered the 2017 Tawe nunnugah which provided ideal conditions for Steve to test his seamanship in southern waters and Majeure’s durability in challenging seas.

In 2019, Steve and Majeure once again returned to southern Tasmanian waters to participate in part of the 2019 Tawe nunnugah, and to showcase Majeure at the Wooden boat Festival in Hobart.

When not in Tasmanian waters, Majeure is moored at Sorrento Sailing Couta Boat Club. Steve uses Majeure for recreational sailing and pleasure cruising.