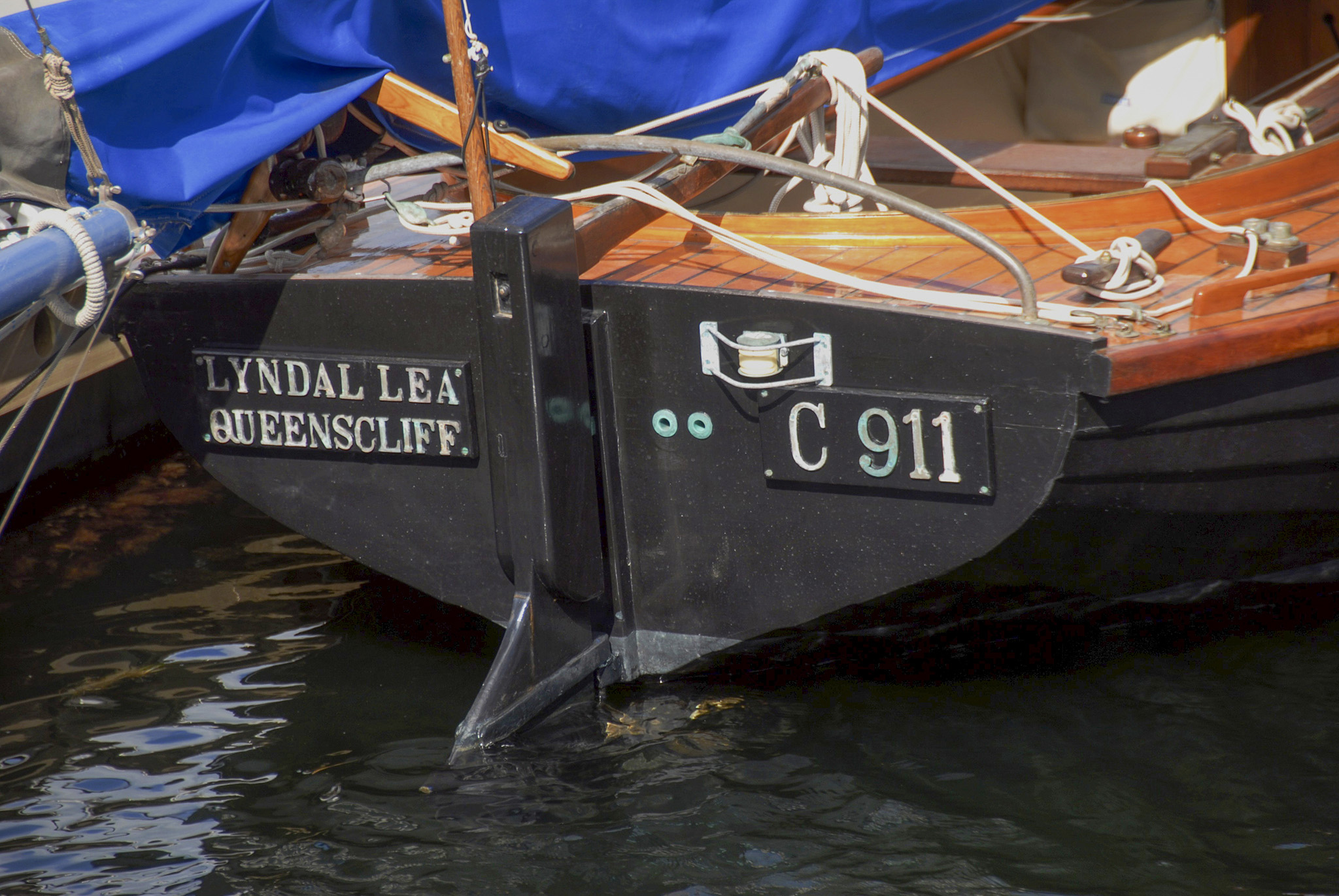 Early Years
The materials used and the building style of Lyndal Lea suggest a manufacture date before 1900. She is Huon Pine planked, has naturally grown knees, and has a Jarrah stem and keel. The ribs and transom are of New Zealand Kauri. She has a Huon Pine rudder and also had a stainless steel one at some stage. Her deck is Celery Top Pine. She is clearly well-built, probably in a shipyard, and a likely candidate could be Blunts at Geelong. There are no records to confirm this.

Custodian: John Harris
She was once owned by John Harris, who taught bricklaying at Gordon Technical College, and fisherman Jack Manson who used to sail her with a dipping lug-rigged cotton sail.

Custodian: Brett Almond; 1980s – 1994
Her next known owner, boatbuilder Brett Almond, found Lyndal Lea looking derelict in a paddock in Portarlington, Victoria in the 1980s and had rescued her, fixed her up and named her after his wife, Lyndal Lea, although earlier she was called Black Swan.

It certainly was love at first sight…

In 1994, the current custodian of Lyndal Lea, Carmen Bell, first spotted this lovely little clinker Couta Boat in the old Queenscliff Harbour with a piece of plywood with ‘For Sale’ and a phone number on it, lying on her thwart. And so Carmen became her new custodian.

In the year Brett Almond sold the boat, he gave an undertaking to the Queenscliff Maritime Museum that she would become an exhibit in the museum that summer. This undertaking was honoured by Carmen Bell.

At some stage during her working life, Lyndal Lea was encased in fibreglass, an emotional wood boat crime, and the Bell family, with Brett Almond’s help, spent a lot of time and effort in 1988 stripping the fibreglass off the hull in their boatshed on Beach Street in Fisherman’s Flat, Queenscliff. Her single-cylinder Renault motor was replaced with a 2-cylinder Nanni diesel engine and her 3-bladed prop with a 2-bladed one to reduce drag when racing.

Her black clinker hull, oiled Celery Top deck and cream-coloured sails make her a very photogenic boat. She was spotted by professional photographer Simon Griffiths during the 2015 Queenscliff Regatta and features in his book ‘BOAT’, a book which salutes the character and craftsmanship of all sorts of boats and boatbuilders and which he assembled in memory of his ancestor Jonathan Griffiths (1773 – 1839), shipowner, boatbuilder, convict, adventurer and businessman.

I have had fun racing her in a black ballgown and matching feather boa in several Ladies Skipper Races at Sorrento.

My most exciting ride in my boat was on our return from the 2006 Volvo Ocean Race event at Victoria Harbour in Melbourne.

The forecast was for a bit of a blow later in the day. We set off early in the company of another small Couta Boat, Nellie C148 (now Waltzing Matilda), while watching the hot air balloons rising from St Kilda. About an hour into the trip, at the spoil grounds in the middle of Port Phillip, a violent squall coming out of the west hit us and for nearly 3 hours we ended up battling waves which at times reached 3 metres and were quite steep. It is a credit to the design of the Couta Boat and to their solid construction techniques that we made it to Queenscliff, and the other boat to Werribee.

Lyndal Lea is moored in Queenscliff Harbour and today, possibly being 110 years old, or more, is one of the oldest Couta Boats still sailing.