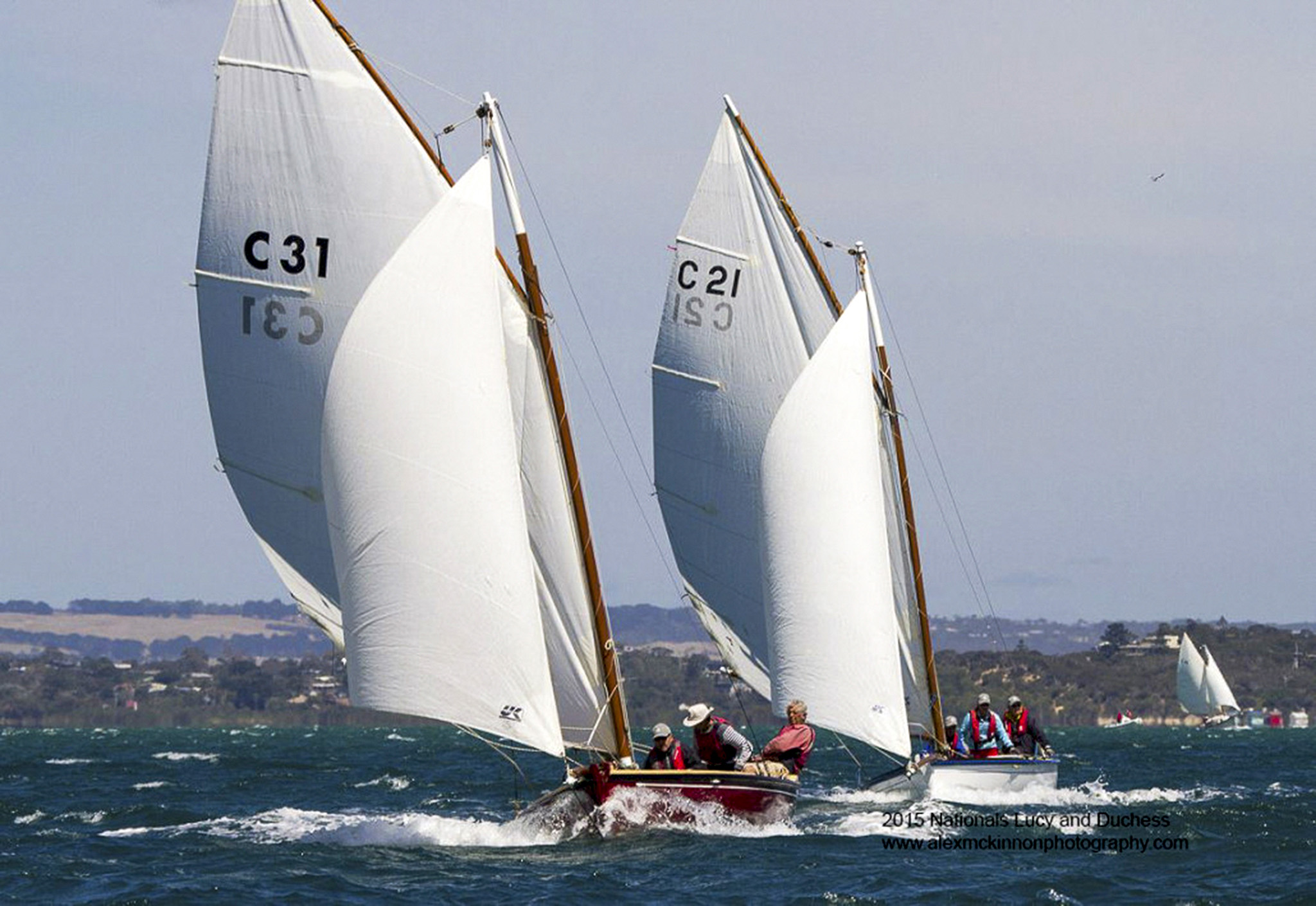 Custodian: Ken Lacco; 1931 – Unknown
Lucy was built by Ken Lacco in Rosebud, Victoria in 1931. Ken was the son of Mitch Lacco, the well-known boatbuilder who conducted his business in Queenscliff at the entrance to Port Phillip. When the Lacco family moved to Rosebud in the late 1920s, Ken took over the responsibility of the family business. Lucy was one of the first of the Couta Boats to be built by young Ken. She was named after Ken’s sister who worked as a sailmaker in the Lacco business.

Ken drew on the design of Wattle C28 that had been built a few years earlier by Mitch. Lucy was constructed in a similar shape but to a shorter length of 22 feet 4 inches. Ken built her for the family to go longlining for snapper on Port Phillip. Over the next 20 years Lucy was used as a fishing boat out of Rosebud, Mordialloc and Williamstown, all located on Port Phillip, but it is not known if she remained in the Lacco family for all of this period.

Custodian: Mr Harrison; Unknown – 1950s
Eventually, Lucy was taken further afield to fish out of Apollo Bay on the south-west coast of Victoria, following the seasonal migration of barracouta along the coastline. For a time, she was owned by a fisherman by the name of Harrison, until Port Phillip fisherman, Murray Johnston, who fished for shark out of the 24 foot Laraine, decided he wanted a smaller boat. He sailed Laraine down to Apollo Bay and did a swap with Harrison, returning Lucy to Port Phillip.

It is likely that she operated out of Queenscliff for some years and was part of the fishing fleet that sailed to San Remo in Western Port each spring to fish for barracouta.

Custodian: Syd Todd; 1950s and beyond
Her next known custodian was Syd Todd, the eldest son of Walter Todd who had owned Wattle and had relocated his family from Queenscliff to San Remo, Western Port in the late 1930s. Thus, Lucy was integrally linked to both the Queenscliff and San Remo fishing fleets. Jack Beazley tells that his uncle Syd owned and operated her out of San Remo in the 1950s, but she was no longer known as Lucy, her name at the time was Diane.

It is possible that Diane continued to work as a fishing vessel in Western Port for the following two decades, but there are no records to verify this claim. It was not until the early 1980s that there was any further trace of the boat.

Custodian: Tim Phillips; 1982 – 1983
Sorrento boatbuilder Tim Phillips came across Diane when he travelled the Victorian coastline in search of the iconic fishing boats that had been built to catch barracouta. He discovered her at Hastings on Western Port and recalls his first sighting:

She was not far from sinking on her mooring and was full of worms.

By this stage she had been substantially altered from her original configuration: the centre-case had been removed and a cabin had been added by Mordialloc boatbuilder, Jack Pompei. Sadly, Jack is no longer around to reveal his working knowledge of the boat. Vale Jack.

When Tim recovered the derelict Diane, he instantly recognized her as a Lacco boat by the signature shape of her transom. Ken Lacco was able to verify that the boat was Lucy, and Tim immediately reverted her name back to Lucy, much to the pleasure of Lucy Lacco.

Custodian: Warick Leeming; 1983 – 1989
Lucy remained in Tim Phillips’ custodianship for a short time until she was purchased by Warick Leeming in 1983. And together they worked to restore her to her original condition in the backyard of Tim’s mother’s place in Portsea, Victoria. They were ably assisted by Warick’s then 12 year old son, Adam, who had the pleasure of sailing Lucy in the Scotch College Sea Scouts regatta in Portsea over the following Easter.

In the process of this massive restoration, Tim used wooden shear-legs and a block and tackle to install the centre-plate. When finished, Lucy was striking in her Navy Blue and Cumberland Stone colours, and beautifully restored and preserved for her future years on the water as a sailing boat, after her many years of service as a fishing vessel.

Warick Leeming raced Lucy in the early fleet of Couta Boats that sailed out of Portsea and later, the Sorrento Sailing Club. Through these events, Lucy’s racing pedigree was established, winning numerous races including the Portsea Cup. However, after four years of regular sailing, Warick purchased Kate C305, and then owned two Couta Boats until Lucy was sold in 1989.

Custodian: Andrew Molloy; 1989 – 2002
Lucy’s new custodian was Andrew Molloy who moored her off Shelly Beach in Portsea. It was in this period that, again, Lucy almost succumbed to the weather elements, having slipped her mooring in a gale and being ‘beached’.

David undertook an overhaul of Lucy to restore her to pristine condition, including the application of durable 2 pack epoxy paint to the topsides and a new set of sails. He also painted Lucy in a Port-Wine colour to match her Division 1 younger sister ship, Kate C305. In the time of David’s Custodianship, Lucy won numerous major races, including 1st Handicap Division 2 in the 2004 CBA National Championship and 1st Handicap Division 2 in the 2007 prestigious Portsea Cup.

Since the purchase, Lucy has been moored near The Baths at Sorrento and sailed regularly in the Division 2 fleet at the SSCBC. She has won significant titles, including: Champion Aggregate, the Couta Boat Association National Titles, State Titles and the Portsea Cup. In 2019, David Barnes sold his share to Alison Kitchen.

Syndicate member Michael Golding is intent on maintaining Lucy as a heritage boat.

In addition to the regular SSCBC sailing, Lucy has competed in regattas conducted out of both Sandringham and St Kilda in Melbourne. She has also sailed to and from Geelong to compete in the 2014, 2016, 2018 and 2020 Biennial Yanmar Wooden Boat Shop Wooden Boat Festival. In November 2019, Lucy was an entrant in the Classic Yacht Association Australia at Williamstown, Victoria.

The journey to and from such regattas constantly tests the crew’s capabilities, but the experience of sailing a boat with a history of 90 years always brings immeasurable pleasure.

In the course of her long history, Lucy would have been privy to many moments of amusement, and, in recent times, the amusement still abounds. In a South Channel Passage Race a few years ago, and in a bid to overtake a Division 2 competitor, Lucy’s helmsman sailed her into the shallows and onto a sandbar. There she stalled until one quick-thinking crew jumped overboard and hurled his muscular body against Lucy’s transom, freeing her from the sandbar. In an instant she was afloat, the crew promptly rescued their hero and Lucy was back in the race!

Additional to competitive sailing, the current syndicate is also intent on using Lucy for fishing and pleasure sailing. Lucy has been a regular participant in the annual SSCBC ‘Catch a Fish Day’ held on Good Friday, with one crew occasionally staying onboard overnight, in order to get the ‘catch of the day’! And for other fishermen, Lucy’s heritage features must hold appeal. One summer’s afternoon when two of the crew sailed Lucy to the vicinity of the South Channel, to fish into the evening, a half dozen or so fishermen followed her. Then over the next few hours, whenever the crew up-anchored Lucy and moved on to another spot, these fishermen followed!

In 2021, Lucy was listed in the ‘Australia Register of Historic Vessels’ on the Australian National  Maritime Museum website.

It is a testament to Lucy that in her 90th year, she is duly recognised as an iconic, heritage Couta Boat.