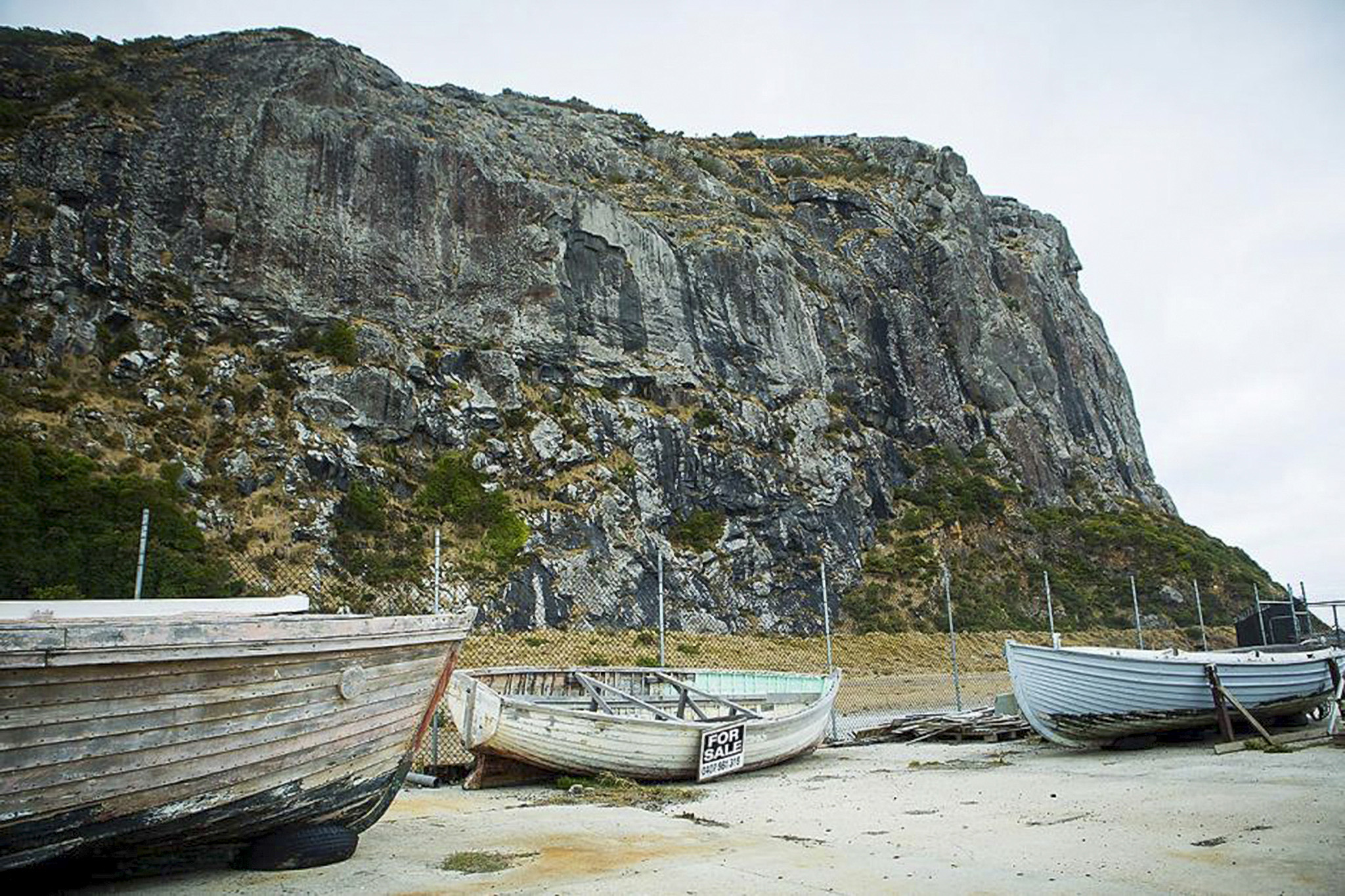 If you can bring an old boat back that’s been sitting in a paddock or somewhere, and it lives again, then you have put a part of your soul into it. Les Sims

Early Years
Lone Dove was built in 1923 by the Williams brothers in Ned Jack’s Shipyard in Launceston, Tasmania. Two of the early vessels built in this shipyard were the 55 foot Lone and a vessel named Dove, which might indicate why Couta Boat Lone Dove was named in later years. The identity of her original owner is not known.

For some 30 years she was owned by a local fisherman from Port Sorell who fished her in Bass Strait. At the end of his long career of using Lone Dove for commercial fishing, he removed her from the water and stored her in a shed at Squeaking Point on the Rubicon River. His intention was to rebuild her, but he died before the project commenced. The family then contacted local Port Sorell boatbuilder and commercial fisherman, Les Sims to gauge his interest in rebuilding the boat; their wish was that they wanted to see her back in the water.

Custodian: Les Sims; 2010 – 2019
Les Sims recognized Lone Dove immediately, as he recalled her working in Bass Strait when he was a child. So he negotiated to purchase the vessel, rebuild her and put her back into service.

The rebuild was undertaken in Les’ workshop in Stanley, located on the north-west coast of Tasmania. Her original timber of Huon Pine was as enduring as ever, but the decks were rebuilt of Celery Top Pine; she was rebuilt to meet the standards specified for commercial survey. A commercial fisherman for many years, Les comes from a background of barracouta and shark fishermen. His first trip on a Couta Boat was when he was just a few days old – his mother placed him in a ‘couta box’ and took him fishing!

He was featured in an article by Rick Eaves, ABC News, Northern Tasmania, 23rd February 2016, in which he tells of the ‘couta jigs that were developed by the Tasmanian Couta fishermen:

The Victorians came across, saw what we were using and then took that idea home with them. Using a leather strap with a hook on it which could be unhooked. We made our own special ‘couta hooks without a barb on them, a very short hook so as soon as the couta was onboard he fell straight off the jig.

Three times quicker than any other method of catching ‘couta. The Tasmanian ‘couta fishermen were miles in front in leading the way. We had about 30 little Couta Boats operating here out of Devonport.

In 2015, Les transferred Lone Dove to St Helens on the east coast of Tasmania where he used her as a charter vessel for cruising on Georges Bay. The cruise included the unique experience of fishing for barracouta from a traditional classic Couta Boat, while under sail or motoring; pike and Australian salmon were also plentiful. Part of the experience was to throw the fish into Lone Dove’s wet well, then at the end of the cruise any fish caught were cleaned, filleted and packed by Les for his passengers.

Custodian: Rod Bailey; 2019 – Present
In 2019, Lone Dove was purchased by a 3rd generation commercial fisherman Rod Bailey of St Helens whose intention was to continue the charter business established by Les Sims. Rod continued the cruises with success for just over a year, until COVID impacted the business, dramatically. Now employed in aquaculture, Rod is reconsidering the viability of the St Helens Couta Boat Cruises on Lone Dove.

We were fortunate to stumble across Les Sims and his beautiful little Couta Boat Lone Dove whilst travelling Tasmania and visiting St Helens back in March 2016. You thought you were going to just have a leisurely cruise around the bay and catch a fish or two. Well, there’s that and more…. Les is a great bloke, happy to share stories about his life as well as information about the area. The fishing was prolific and we were fortunate to catch a barracouta too – how appropriate. The boat is about to be featured in a movie, to be released in September, so look out for that – “The Light Between Oceans”. Thank you Les for making us so welcome and for making our cruise one of the best things we experienced on our whole trip in Tasmania. We’ll be back to see you again next time we are down there. Sorry it’s taken me so long to send in my review.

Les Sims was the baby of fishing parents, sailing out of Devonport on their Couta Boat, when the young Queen Elizabeth gave them a wave from Victoria Parade. It was 1954 and possibly, the quaint sense of family and tradition was what caught the young Queen’s eye.

If you can bring an old boat back that’s been sitting in a paddock or somewhere and it lives again, then you put a part of your soul into it.

Mum and dad fished together, they were ‘couta fishermen and shark fishermen and dad used to build little boats, dinghies and all sorts, Les Sims said. When I was a baby, they just put me in the Couta Boat and we’d be off cod fishing, down the river. Mum told me the story about how the Queen went past and gave me a wave when I was a baby and we were out on the river.

60 years later, Queen Elizabeth is still on the throne and Les Sims still spends his life on and around boats.

In an old TasPorts shed on the Stanley Wharf, Les Sims has been restoring rotting wooden boats to their former glory. It is a breathtaking workplace, with waves going past the wharf visible through the back window and Stanley’s huge volcanic plug headland, The Nut, rising out of view through the big sliding door at the front.

A couple of old and worn whalers lie nostalgically by the fence outside, awaiting Les Sims’s skill and attention. Working with old boats giving youth a second chance. For the past 20 years, Les Sims has worked a lot with a young people who have who have fallen foul of the law and such work has been central to his operation on the Stanley wharf.

For the last four years here in Stanley, we’ve been running a youth justice program with young offenders who have to do community service, Les Sims said. Any building or restoring we do, they get involved with that. We try to work them through a new direction in their life, give them something positive, give them a little bit of self-esteem. TasPorts have been great to us; we lease the building from them and they give us a sponsorship for the rental because of that justice work we do.

After a childhood spent on the water, Les Sims could well understand that not every young person feels comfortable in the school system. The difference for him was, he always knew where he was going — to sea.

At age 10, he was helping his dad build ‘flatties’ or little netting dinghies and built his own dinghy for the first time in grade five. Over the years, Les Sims has worked as a fisherman, a boat builder and even skippered a boat to Antarctica. Most recently, he had a flirtation with the film industry and scarcely had to leave his beloved wharf shed to do it. The major Dreamworks motion picture, the Light Between Oceans, will be released later this year. In it will be a swathe of Stanley locals, including Les, who was actor Jack Thompson’s body double.

I was part of the crew for marine co-ordination and was Jack Thompson’s double when bringing the boat into the wharf, [for] sail-pasts [and] those sorts of things. I got on pretty well with him; he likes a whiskey. And I like a rum so we got on pretty well, yeah.

Adjoining the workshop space, Les Sims has established a small maritime museum, his heritage room, filled with the remnants of a life lived on and around boats. A lot of the items are his own memories, including numerous, nostalgic sailing and boat-building magazines. He even has the original lead line he once used to help his father sound depth and establish what kind of bottom lay beneath their boat.

The string is marked in fathoms and feet (a fathom is 180cm) and for Les, it is by far the most nostalgic item in his collection — a direct connection to a youth spent working closely with his parents at sea. Another highlight of the collection is the steering wheel and telegraph post from the 131-tonne Lady Flinders, wrecked off Three Hummock Island in 1938.

The latest of Les Sims’s restored boats currently takes pride of place at his Stanley Marine Centre. The Rambler is a 21-foot wooden couta boat, built in Devonport in the late 1930s.
Completely restored, she is also fully rigged with sails which catch the wind through the open door and fill. An impressive sight, the vessel is also the best evidence of Les Sims’s passion for keeping the old boats alive. He bought The Rambler for the first time many years ago, restored her and gave her to his parents. After his parents passed on, the vessel changed hands a couple of times before Les bought her a second time — and restored her a second time.

I’m going to keep this one for a family boat; I’m going to take her to St Helens where I have my other Couta Boat, the Lone Dove, Les Sims said.