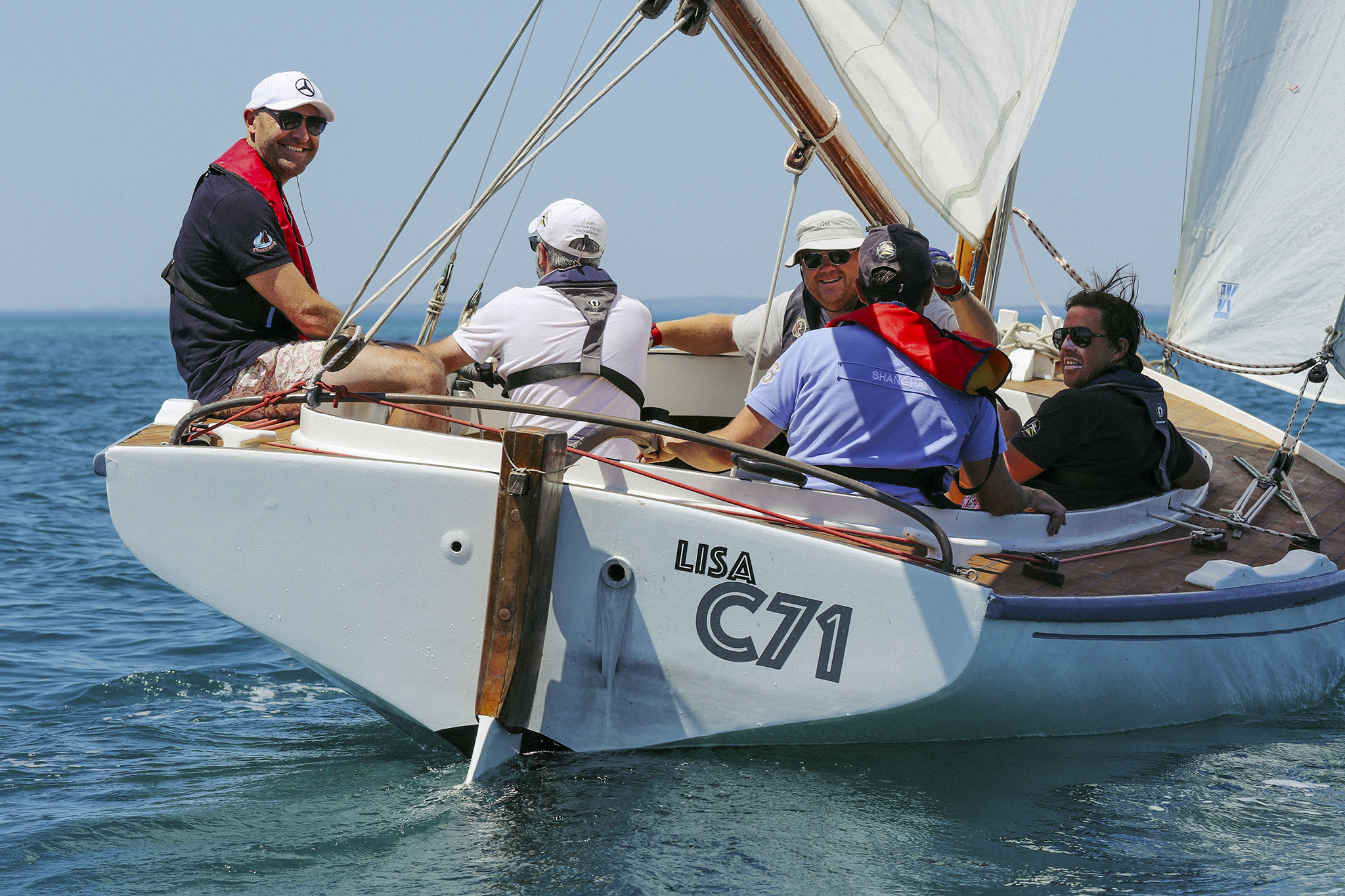 Custodian: John Goetz; 1991 – 2005
Lisa was built by the Wooden Boat Shop at Sorrento in 1991. She is 26 foot 6 inches in length and is built of King Billy Pine, Celery Top Pine and Grey Box Eucalyptus, while the deck is Queensland Beech.

Lisa was built for John Goetz, a keen yachtsman from Royal Brighton Yacht Club (RBYC), Victoria. John learnt to sail dinghies at the 11th Brighton Sea Scouts and then steadily progressed to keel boats, engaging in ocean cruising and racing.

John had observed Couta Boats during his many visits to the southern end of Port Phillip and was taken by their elegance and turn of speed. His old school friend, Jim Woods, who regularly sailed on Weeroona, was only too pleased to take John out for a sail. After a particularly memorable sail to and from Queenscliff in a very stiff breeze, John was hooked.

He then started crewing for Tim Phillips on Muriel and it wasn’t long before he commissioned a boat to be built. Lisa was constructed alongside Armadale, ordered by Peter Hannah. At the time, Hood sailmakers was the go-to loft for Couta Boat sails. The chief at Hood, the legendary Col Anderson, was retained to prepare a full suit of sails for Lisa.

On 7th November, 1991, Lisa was launched at the Sorrento Aquarium where she was christened by John’s wife Lisa Goetz, with champagne cracked over her bow.

Following her launch and until late 1995, Lisa spent the summer months at Sorrento. There she regularly competed in the Couta Boat Club races and a number of Portsea Cups. For the winter, she usually returned to RBYC where a Winter Series of races for Couta Boats was hosted by RBYC. A number of Couta Boats competed. Most success was achieved by the skilful James Gibson helming Cheviot.

Whilst at the northern end of the bay, Lisa was also used by the Goetz family for regular social sailing, with trips down to Half Moon Bay for swimming, fishing for garfish, flathead and snapper. Under the watchful eye of John’s father, Ernie, who was a keen yachtie, fisherman and part owner in Lady Florence, a Lacco boat, were the obligatory Sunday trips to Williamstown for ice-cream with the kids.

At the end of 1995, John accepted a three-year legal position in the Northern Territory and entrusted the boat to his brother-in-law, Tom Herriott. He and his friends regularly used Lisa and gained much pleasure from both sailing and fishing.

Custodian: Max Chester, Rod Martin, Oliva Stewart, and Mark Waterworth; 2005 – 2013
After returning to Melbourne in late 1998, John, once again began sailing Lisa at both the northern and southern ends of Port Phillip. Sadly, with increasing work commitments and a change in family interests and priorities, Lisa was not sailed as much as John would have liked. After much agonising, Lisa was sold in 2005 to a syndicate comprising Rod Martin, Olivia Stewart and Mark Waterworth.

Mark Waterworth recalls that often he sat in his Jubilee on her mooring, where there was very little breeze, and watched the Couta Boats start their race further out, in a good sea breeze. He was attracted to Lisa as she was built out of King Billy Pine timber and had finer lines, which was an advantage when sailing upwind. A short time later, Max Chester joined this syndicate too. All were members of Sorrento Sailing Couta Boat Club (SSCBC).

The Couta Boat Club was very precious in those days. This was an expensive means to be assured of a sail and we gave it our best shot. I remember the arguments well. And Lisa was a good boat. She won a Portsea Cup, sailed in every race over 12 years, did not do too much damage, was t-boned, lost her way, went on the rocks, and used far too much sandpaper. And fun. Very few females sailed in the early years. Being told ‘go back to the kitchen’ was the norm’.

Many female crew sailed and learnt to sail on Lisa. Hello to Andrea, Bronwyn, Jane and Maree. The highlight was when Michael Stewart and Mark Bulka had a crack at the Portsea Cup. Unofficially they won the Handicap by 16 minutes, before being told by someone who didn’t, that you’ve stacked the crew, disqualified! So, Lisa was and still is, one of the greats.

Custodian: Michael and Oliva Stewart; 2013 – 2015
In 2013, Michael and Oliver Stewart became the custodians of Lisa. Olivia chose to rename her Olive May in memory of Olivia’s grandmother.

Dan (‘DI’) sailed on Couta Boats as a child, often taking the tiller on Minerva as an 11-year-old, whilst James (‘Soutts’) cut his teeth sailing an International 420 Dinghy on the Gippsland Lakes. In his youth, Dan also honed his skills sailing a 16 foot Corsair off Sorrento and Portsea. More recently, James crewed on Mystify during her successful 2015 season. Tristan (‘TF’) caught the Couta bug, having been a ‘ring in’ with James on Eloise, under skipper Michael Cook during the 2013 and 2014 seasons.

During the winter of 2016, Olive May was returned to Lisa, her original name. Working bees through the off season saw Lisa receive a makeover, including a new colour scheme as well as a general freshen up. Crew shirts were procured, and the owners received their first taste of the blood, sweat and tears….and costs associated with owning a wooden boat. All of which are far outweighed by the enjoyment of being on the water, competing and the great banter amongst mates over beers and ‘black rats’!

James, Dan and Tristan are joined by regular crew members Cameron ‘Miffa’ Smith and Cameron De Mooy. Miffa contributes his experience from sailing 18 foot JBs out of Port Melbourne and 125s and Pacers with Dan during school days, whilst De Mooy’s primary skillset is ensuring Lisa always leaves the mooring with a well-stocked Esky!

On the water, the helm duties are shared between James, Dan and Miffa with Tristan taking the tiller when conditions permit – a gentle breeze and a small fleet! When not distributing refreshments, De Mooy does his best work with the whisker pole in hand.

Being a weighty boat, Lisa loves a reach in heavy conditions. This has seen her taste success, on Handicap, winning Handicap in two back-to-back Club Aggregate races in mid-season 2021, and in a handful of passage races: the 2020 Division 1 inaugural New Year’s Day Regatta, the Sorrento Cup in 2019 and the 2018 Three Piers Race. She generally finds herself in the placings for the annual South Channel Passage Race, being New Year’s Day it typically takes a few frothies to get the crew back on an even keel.

A highlight was securing the silverware for the 2019 SSCBC Passage Aggregate series. Requiring no excuse at the best of times, the Lisa crew celebrated with great gusto. Presentation Night was a most memorable affair. Celebrations occurred again in 2021 when Lisa scored Division 1 First Handicap in the Passage Race Series Series and 2nd Handicap Division 1 in the Club Aggregate.

Whilst Lisa receives the required attention from a maintenance perspective, sandbars keep the centre-plate svelte; she might benefit from a new set of sails, and an expert casting an eye over the set up – next season needs to become this season!

Lisa has added a wonderful new dimension to summers on the Peninsula not only for her owners and crew, but also their families.

Port Phillip is 35 times the size of Sydney Harbour and sailing across it is like sailing across a small ocean. Being land-locked, the wind can blow hard and waves build quickly, rolling down the length of the bay, which can make for a treacherous voyage.

I have spent many days sailing and racing at the southern end of the Port Phillip and it is so liberating to sail almost out of sight of land and over open water toward Melbourne; especially solo. Sailing solo means that there develops a special bond between a sailor and their boat as there are no distractions and a Couta Boat is a fine vessel to connect with. I love sailing solo from Sorrento due north up Port Phillip to Williamstown for the annual Classic Yacht Association Cup Regatta and this story is about one in particular; the 2008 journey.

Slipping the mooring at Sorrento on Lisa early in the morning, as I strapped the GPS to the thwart to keep me posted on the ETA at Williamstown, I relished the thought of spending the next six hours on her sailing across Port Phillip.

There is no furling headsail on a Couta Boat, so I do not hoist a Jib when sailing alone because it can be awkward to drop and steer at the same time. However, as I approached the shallows of Mud Island, a light breeze came in and on such a glorious morning, I decided to hoist the No. 1 jib as well as the main.

It was beautiful sailing and by the time we were in the middle of the bay the breeze had increased, but was steady and because I was enjoying the sailing, I decided to keep the No. 1 flying. Sure enough, soon the wind really started picking up and the flat water turned into a decent chop, but Lisa, happy in these heavier conditions was sailing beautifully, so I ignored the signs of impending wind.

We were sailing well up the bay by now; there was a solid green water sea running, the breeze had risen significantly, swinging directly aft to the south, so I became concerned about how I would be able to drop the jib and steer without too much drama or risk. I carefully estimated that even though it would be very messy, I could drop the jib if I really had to and because the boat was handling these conditions perfectly, decided to keep going all the way into Williamstown to drop the jib in the lee of the breakwater.

At this stage, the wind had increased to 20 knots and here I was solo on a 26’ Couta Boat with all 600 sq. ft. of sail flying, sitting way back on the stern quarter gently gybing to maintain a heading for Williamstown at the top end of Port Phillip. Gybing in 20 knots of wind can be troublesome but my GPS was showing Lisa travelling at 9 knots before the wind. The apparent wind was only about 10 knots making a gybe surprisingly gentle in the strong wind.

Imagine the sight a few miles off Williamstown in a big sea – Lisa under full sail powering down the waves, spray flying out into the bright sunshine. Wow! I wished someone were there videoing this magnificent sight. Feeling elated and alive, my confidence in this lovely boat increased as did my sense of pride in the way she handled these conditions; impeccably.

What an unforgettable sail! Then to cap it off as I entered the Williamstown breakwater, it was flat with almost no wind, protected by the shipyards and a big naval vessel under construction. I jumped easily onto Lisa’s foredeck, dropped the jib and headed into the marina feeling as if I had flown in on a magic carpet; what an inspirational solo sailing experience!