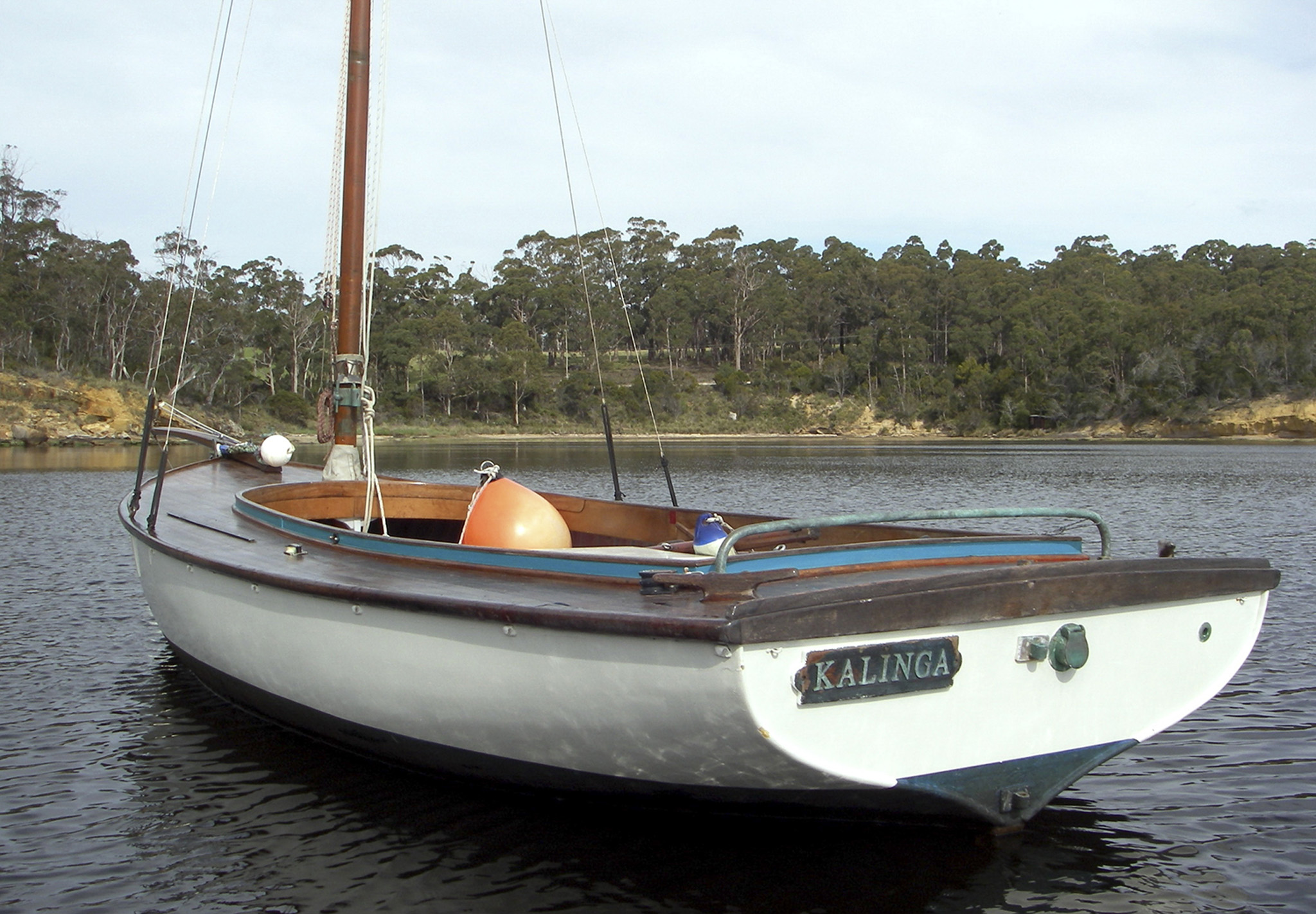 Custodian: Harry Clark
Renowned shipwright and boatbuilder Harry Clark from Newport, Victoria, designed and built Kalinga in circa 1956, but her early history is unclear. The 20 foot Kalinga was built in Harry’s famous boat building shed at the rear of his home in Newport. She was planked in Oregon and fitted with a jibboom and centre plate for sailing in competition on Hobsons Bay, and fishing the northern reaches of Port Phillip.

Harry, with the assistance of Williamstown builder Bob McWilliams, built a number of similar hulls for local fishermen in the 20 to 26 foot range in the mid 1950s, according to his son Ron Clark who is also a highly respected shipwright and who frequently assisted his father in his boatbuilding business. Kalinga is believed to be one of these boats and Williamstown shipwright Ian Curry believes the boat was originally built for a local resident Mr Macleod, and that the boat had a long association with the Hobsons Bay Yacht Club in its early years.

For many years Kalinga later sailed out of the Hobsons Bay Yacht Club (HBYC) by colourful Williamstown identities Neil Morton and Robert Young who regularly competed in HBYC events. Williamstown boatbuilder Greg Blunt recalls that Kalinga was regularly slipped in the 1970s and 1980s at the C Blunt Boatbuilder facility then operated by his father, and remembers personally building an oversize jibboom for the vessel on one occasion, presumably after a race incident.

Kalinga competed in the 1984 Williamstown Cup conducted by the Couta Boat Club which had arranged for the Harry Clark built 28 foot Strathallon to act as the official Start Boat. Tim Ryan recalls that Morton was confident that he was ready to take on the big Couta boats that had sailed up from Sorrento, and that he would stitch up the invaders. But Kalinga was no match for the 26 footers and never competed in another Couta Boat Club event.

Robert Young continued to sail the Kalinga from Hobsons Bay well into the 1990s when the boat was sold to Mark Levy in 1997, and the deck was replaced with a new laid deck.

Custodian: Bruce Wilson; Unknown – 2013
Custodian: Peter Gibberd; 2013 – 2020
After several years located at the Brighton marina, Kalinga was sold to a Tasmanian, Bruce Wilson, who regularly used the craft as a fishing boat in Southern Tasmania, primarily at Cygnet and on the Huon River.

Kalinga was sold in 2013 to Peter Gibberd from Goolwa, SA. Peter sailed Kalinga on an occasional basis, then early in 2020 Robert Tunks purchased her.

Custodian: Robert Tunks; 2020 – Present
Kalinga’s new base is in northern Tasmania at Beauty Point, located at the mouth of the Tamar River. Having owned a small Couta Boat in earlier years, Robert loved its design, its graceful lines and gaff-rig. Having also restored a motor bike, Robert knew the challenges involved in the restoration process, so he looked for a Couta Boat that he could recondition and rig to sail single-handed. Kalinga suited these requirements.

Robert has commenced the process: he has scarfed in some new ribs and inserted some sister ribs steamed out of Huon Pine, a new Samson post has been inserted, the centre-case has been repaired, a new centre-plate fitted, and the hull interior has been painted. The next task is to fit new floorboards in Huon Pine or Teak. Robert has also sourced a new propeller from the USA to suit the size and pitch of the boat.

When the repairs are completed, Robert intends to use Kalinga for recreational sailing out of Port Dalrymple Yacht Club, located on the Tamar River.

The meaning of the name ‘Kalinga’ is derived from Indian origin as ‘One who Knows the Arts and the Skills.’ Ron Clark has recently produced a book outlining his father Harry’s unique and innovative boatbuilding techniques, ranging from his twin trademark fairlead rollers on the stemhead, to a special device called a ‘dog’ that he designed for the purpose of holding timbers in place when edge setting a plank in place. Kalinga features all the Harry Clark hallmarks including his classic arrow line along the hull, which can quickly identify a Harry boat in many spots around the coast.