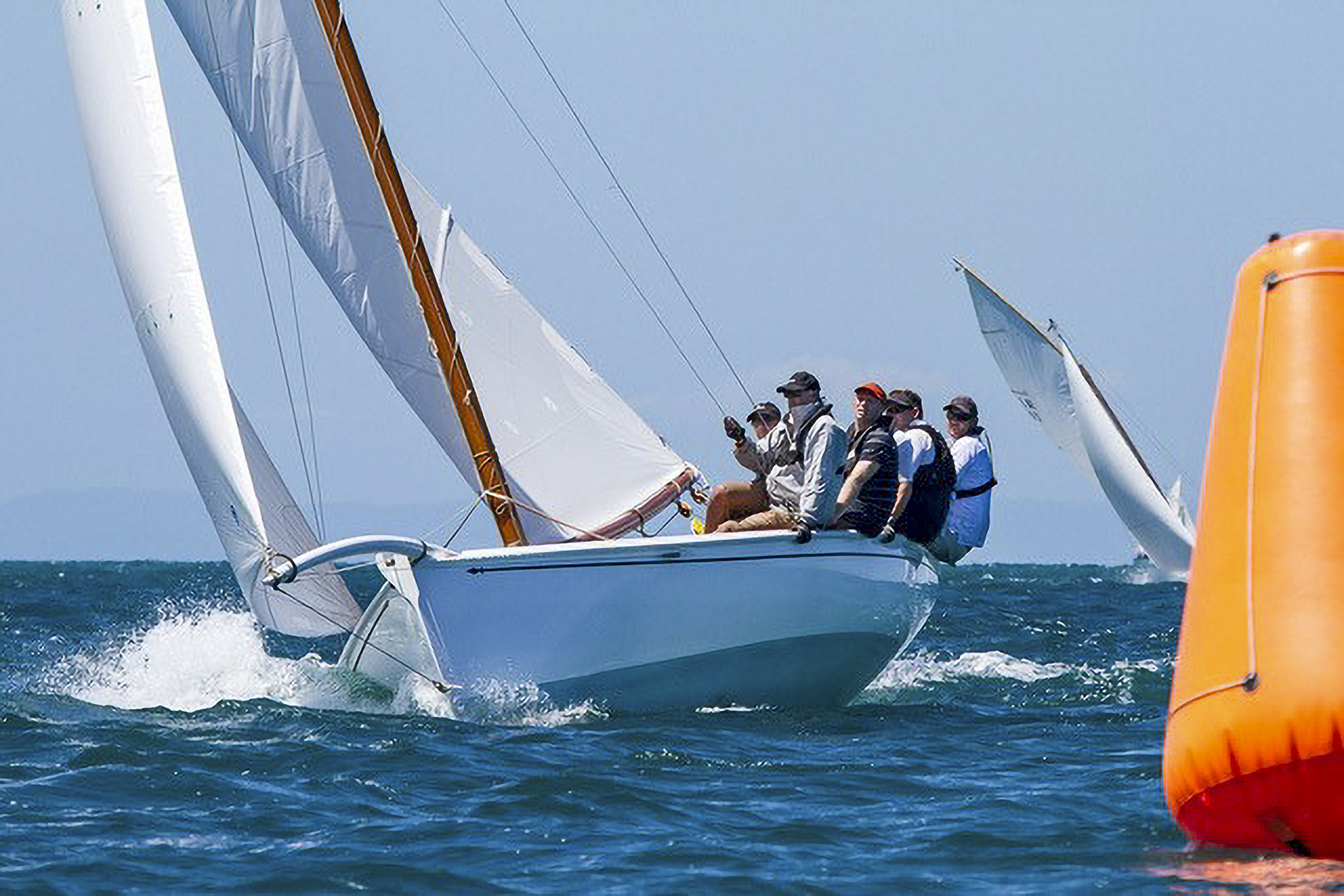 Custodians: Mal Hart, Richard Hart; 2013 – Present
Jocelyn was built by the Wooden Boat Shop in Sorrento, Victoria in 2014. Mal Hart, who commissioned the design and build, drew upon his own pedigree as an expert boatbuilder, in earlier years building many timber boats and later, owner of the internationally renowned Hart Marine, Boat Builders.

Having commenced his boatbuilding apprenticeship with S&J Boatbuilders at Seaford in outer Metropolitan Melbourne at the age of just 15, at the age of 21, Mal started his own business. During his apprenticeship and through his own business, he built Lacco style fishing boats and a range of classic dinghies, including Fireballs and 14’ skiffs, and then onto many Sydney to Hobart yachts: From Ausmaid and Skandia, but not a Couta Boat.

Mal’s introduction to Couta Boats was through his brother Richard Hart, who owned and campaigned Matilda in regattas conducted by the Couta Boat Association (CBA) at Sorrento. Richard extended an invitation to Mal to sail on Matilda, whose response was:

I’m not that excited.

After that initial reaction, Mal did sail on Matilda and enjoyed the experience, so much so that after a few years of racing he and Richard decided to incorporate their expert knowledge and commission the build of Jocelyn, one that was faster than Matilda. Matilda was sold and Richard and Mal became joint custodians of the new boat, and named her Jocelyn after their mother.

Mal recognised Tim Phillips as an expert Couta Boat builder and took to him a list of requirements. His guiding principle was that every component is essential to the overall performance of the boat. Having observed the on-water performance of Romy, he asked Tim to design a boat around the envelope of Romy, incorporating her distinctive features including her shorter forefoot. Other requirements included a plumb bow, a small engine, the longest centre-board possible and the longest waterline length to produce straight waterline planes, ensuring a very light boat, but at all times complying with the Couta Boat Association class rules. The timbers chosen were Cedrela for the hull, while the deck was a combination of Cedrela (Spanish Cedar) and plywood.

Since her launch on the 25th December 2013, Jocelyn has been a consistently high-performing boat in the Division 1 fleet at the Sorrento Sailing Couta Boat Club (SSCBC). In campaigning Jocelyn, Mal is able to draw on his many years of experience in competitive sailing at the local, national and international levels in both dinghies and keel boats, in coastal and in ocean racing. Having competed in multiple Sydney Hobart Yacht Races and in the two-handed Melbourne Osaka Cup, Mal is regarded as an acclaimed yachtsman and applies his skills and experience to maximising Jocelyn’s performance.

Race Records show Jocelyn’s success in multiple races each season, including Line Honours in the premier Division 1 Portsea Cup in 2015, 2016, 2017, 2019 and 2021. In the 2019 Portsea Cup race Jocelyn managed to come from 6th to 1st position to take out Line Honours, but on these occasions the sailing pedigree of the crew impedes Jocelyn’s handicap result – on board was GT (Graeme Taylor) a regular helmsman of Wild Oats 11 and Victorian Sailor of the Year in 2020. Jocelyn scooped Line Honours in the Division 1 Club Aggregate Race Series for the 2021 summer season.

The crew are good friends of both Mal and Richard, all of whom are skilled sailors. Richard declares that he is a navigator while Mal is the expert sailor. Richard reveals an arrangement that synchronises well for these sibling owners:

Mal bonds the crew while I work the foredeck!

Mal is of the strong conviction that regular, even weekly, maintenance is essential for a boat’s on-water performance. The underside of Jocelyn is scrubbed and polished on a weekly basis and sails are treated with due respect, being folded systematically after each race. At the beginning of each season, Jocelyn is given a new set of sails which enhances her on-water performance. In dry dock in the Hart Marine factory, Richard generally oversees the maintenance of Jocelyn, doing the preparatory cleaning and sanding while Mal organises the painting, ensuring the boat is kept in excellent condition.

Under the custodianship of Mal and Richard, Jocelyn should continue to perform at the optimal level, thus ensuring exceptional racing for many more years in the Division 1 fleet at the SSCBC.