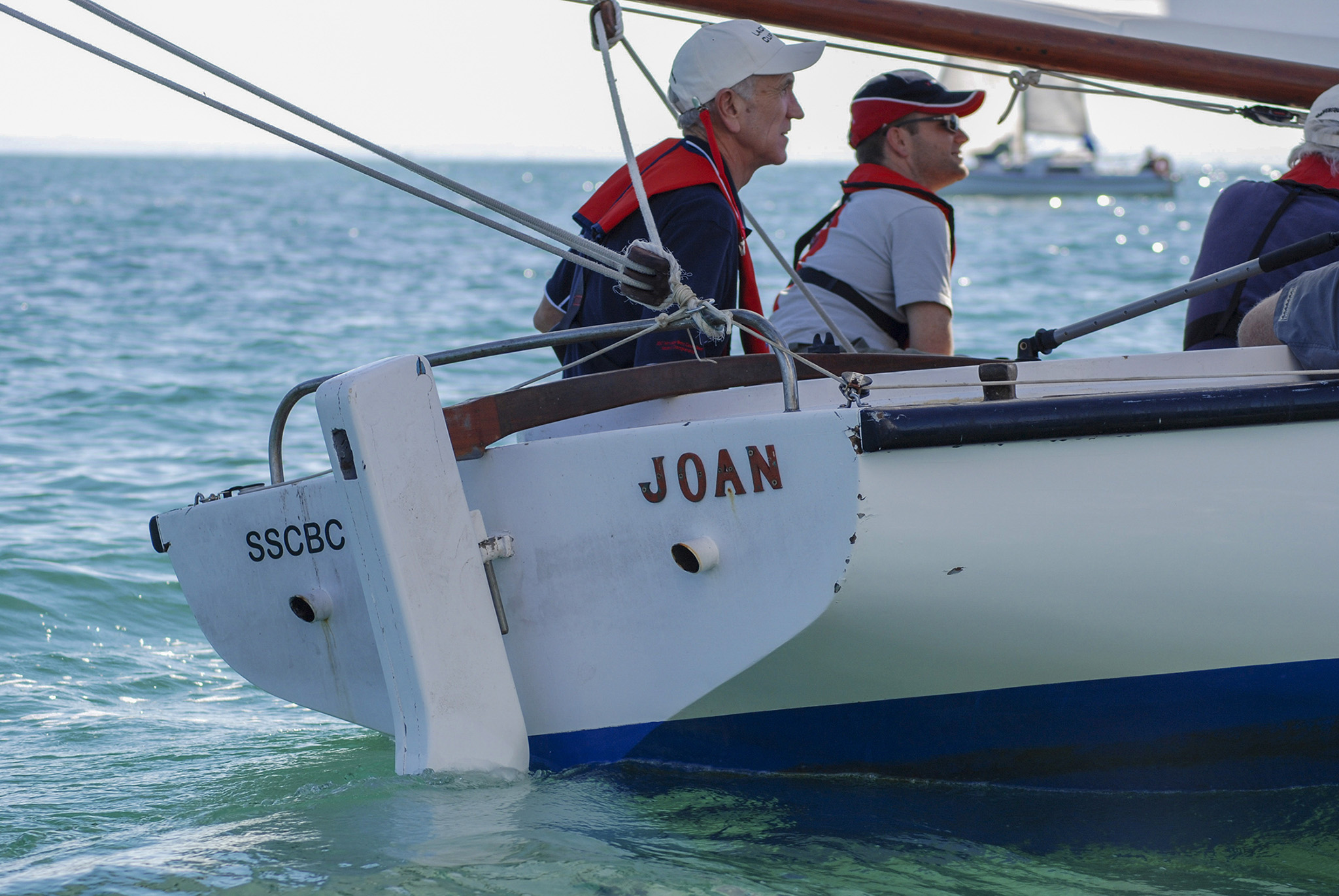 Smacker named her after his eldest daughter. Along with other Couta Boats built by Peter Locke, Joan was destined for Port Fairy on the south-west coastline of Victoria, to fish mainly for barracouta and crayfish in Bass Strait. It is believed she sailed down to Port Fairy from Port Phillip on her own keel.

As Smacker Jackson was a commercial fisherman, Joan was part of the fishing fleet that operated out of Port Fairy. Smacker married a local girl from Port Fairy so he was integrally connected to the local community, even assuming the coveted role of Captain of the Port Fairy Football Club. But life took a tragic turn for the family when Smacker’s father-in-law tragically drowned whilst out fishing.

Smacker Jackson sold Joan in 1939, but there are differences of opinion as to her whereabouts over the next 40 years. One source claims that Rye fisherman Edward ‘Wingy’ Newman purchased Joan in 1939 and brought her back to Port Phillip. Another source asserts that she remained in Port Fairy. Whatever was Joan’s destiny in this period, eventually in the early 1980s, she was purchased by Port Fairy local Rodney Robertson for recreational use.

Custodian: Rodney Robertson; Early 1980s – 1986
Soon after the purchase, Rodney Robertson arranged for Joan to be transported to Garry Stewart’s boatshed in Port Fairy for restoration and her conversion from a fishing vessel to a sailing boat. Garry tells:

Basically, she was just a hull with a little half-cabin and a Lister motor forward of the thwart. There was no jibboom and the centre-case had been removed.

After the restoration was completed, Joan was relaunched at Port Fairy where Rodney and his family used the boat for recreational sailing and fishing. However, the family owned Joan for just a few years.

In 2011, the owners and crew of Joan hosted relatives of Peter Locke, her builder. Peter’s daughter, who was in her 80s, and her granddaughter’s husband and grandson visited Sorrento and went sailing on Joan, high with emotion. This meeting of the family with the owners and crew of Joan was a fitting tribute to a fine craftsman who had then built her almost 90 years ago.

Since her purchase in 2006, Joan’s two custodians, Ken and Trevor, and their crew have competitively sailed Joan in the Division 2 fleet out of SSCBC. She has won some significant titles numerous times, including the Division 2 Season Aggregate, the Portsea Cup, the Couta Boat Association (CBA) Nationals and the CBA State Titles. See Race Record for details.

Ken Matthews claims that Joan’s success is due to a loyal crew that has been sailing Joan since the time of her purchase, namely: owners Ken and Trevor with Phil Mellett, Rob Tucker, and, until about 2015, Phil Butler and ‘Kuta’ Whitten. Given the average age of the crew in 2021 is about 74, Ken says:

It just proves that seniors can still compete.

In the second season of Joan’s participation in the SSCBC competition, Ken presented each of the crew with a monogrammed formal white t-shirt with each crew’s positions suitably designated on the sleeve. For Tucker the helmsman, ‘Captain Bligh’; Butler the navigator, ‘Vasco’; Mellett the organiser, XO (Executive Officer); Whitten the forehand, ‘Kuta’; Ken the owner and crew, ‘Trimmer’; and Martyn the owner and crew, MB (Movable Ballast).

For many years these t-shirts were mandatory dress at awards’ evenings and other special occasions when Joan took out honours. Suffice to say, in most cases the shirts have now been relegated to the bottom drawer, after having too many red wines poured over them! Rob proudly wears another t-shirt presented to him by his supportive crew and which bears the slogan:

The lashings will continue until crew morale improves.

Despite Joan’s great success in competitive sailing, the crew has faced a few on-water hazards. In one of her first regattas sailed over at Queenscliff, the helmsman Rob wore a pair of ‘crocs’ on-board. But this ‘Captain Bligh’ underestimated their grip and managed to slip overboard during the race. The astonished crew were further stunned when they realised that they didn’t know how to start the motor to turn the boat around to rescue their lost helmsman. This was also before the time of mandatory VHF radios on-board. Rob was left to tread water for some time before Claire C154 plucked him out of the water and attracted the attention of the Club’s patrol boat. Eventually, the bedraggled helmsman was delivered back to Joan where he promptly started the motor and sailed her back to her mooring at SSCBC. Joan was not in the ‘winnings’ on that day!

In the 2020 season, Joan was declared the Handicap Winner of the SSCBC Series Aggregate, concluding another successful season in competition.

Tony started sailing at Blairgowrie Yacht Squadron many years ago and, apart from the odd sail in Couta boats at SSCBC, looks forward to joining the Division 2 fleet on a regular basis. The crew will include Tony’s brother Peter and a few close friends

Joan begins another new chapter in her life at SSCBC.