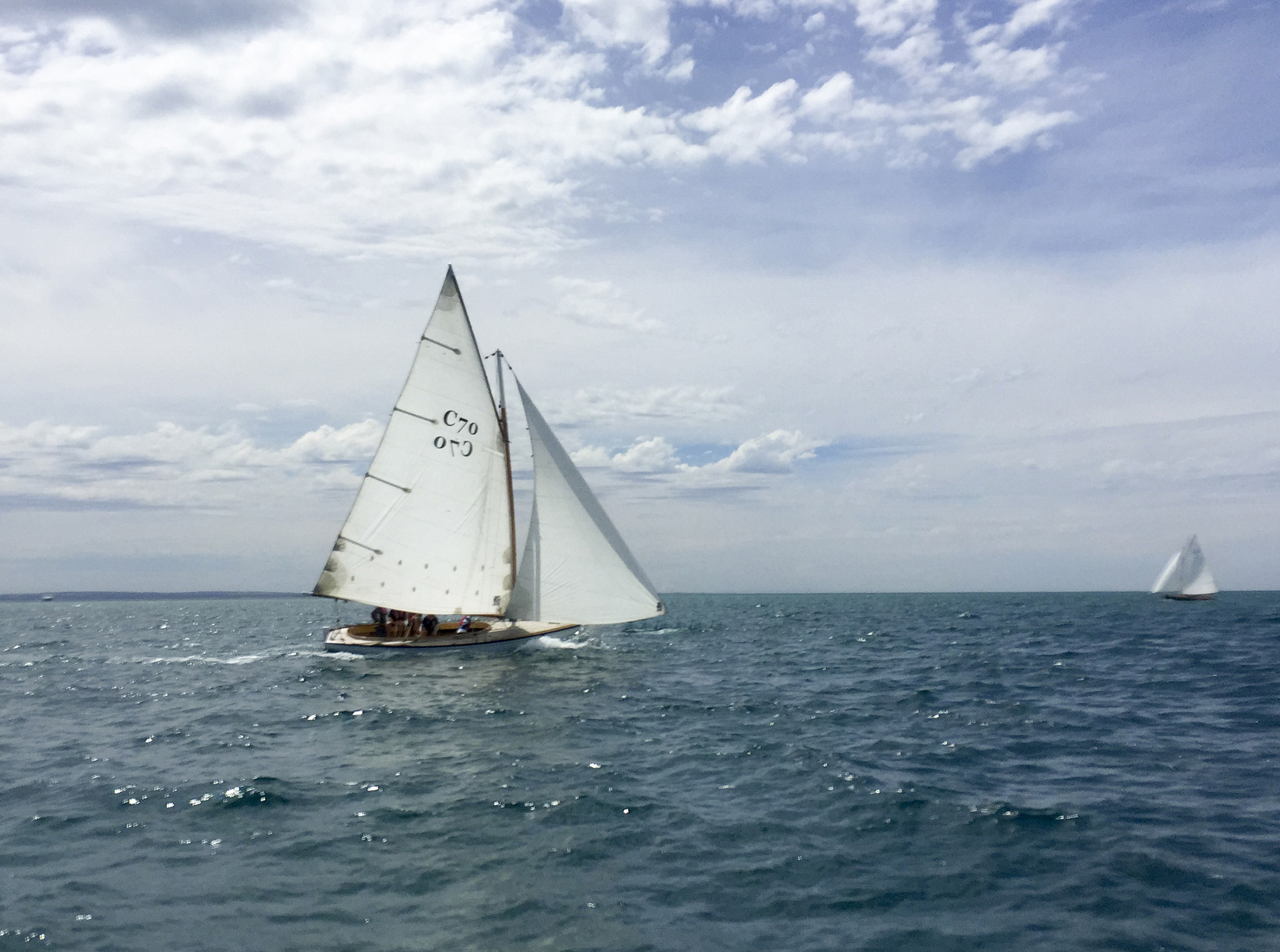 Custodian: Peter Bennett; 1990 – 2003
Jennifer C70 was built in 1990 by Mark Abbott at the Wooden Boat Shop (WBS) in Sorrento, Victoria. She was built for Peter Bennett who named her Jennifer after his wife. She is constructed of Huon Pine except for the stem, keel and centre-case.

Peter travelled to southern Tasmania to source the Huon Pine for the build. He claimed that Huon Pine was a wonderful timber and that there was nothing like the smell of Huon as it was being worked.

Tim Phillips of WBS set up the backbone of the boat: building the keel, stem and stern, and steam-bending and driving in the ribs. Mark Abbott then worked on the planking. From time to time, Peter assisted with some labouring work.

In the time that Peter owned Jennifer he was the President of the Couta Boat Club for three years, from 1992 to 1994. He was well regarded in that role and his love of the Couta Boat class was reflected in Jennifer’s on-water performance. He loved to sail Jennifer competitively but he was known to always be measured in his judgement as a helmsman. In reminiscing about his love of sailing, Peter declared that he enjoyed just being on the water:

You are fully occupied because you are trying to anticipate the wind shifts before someone else or staying on tack when all other boats have tacked away, then hopefully picking up a wind shift that is favourable; and what’s happening around you. There’s nothing better than having a really good sail.

The sale was negotiated by Grant’s friend Will Baillieu who was one of the key instigators in the development of the Couta Boat fleet in the early 1980s. After the purchase, Grant renamed her Roma, the name of his mother.

Over the next four seasons, Roma continued to be a regular competitor in the Division 1 fleet at Sorrento Sailing Couta Boat Club (SSCBC). The highlight for Grant and his crew was winning the National Championships in 2006. Onboard were well-known Couta Boat sailor Peter Gale and sailmaker Mark Rimington, who were a formidable team. Despite the on-water success of Roma, however, Grant and Peter decided to commission the build of another Couta Boat and found a new owner for Roma.

Custodians: Mark Abbott and Michael Arcaro; 2008 – Early 2010s
In 2008, Mark Abbott and Michael Arcaro purchased Roma from Grant Smith and returned her name to Jennifer. Having been involved in her construction, Mark already had an attachment to the boat and so the opportunity to purchase Jennifer appealed. However, the demands of his growing boatbuilding business Corsair Boats prevented Mark from sailing her on a regular basis, so Michael became the regular helmsman and successfully campaigned her in the Division 1 fleet at SSCBC.

Jennifer was penned at Martha Cove, which is some 28 nautical miles north-east from Sorrento on Port Phillip. But distance did not deter Michael from ensuring Jennifer was sailed in the regular Saturday SSCBC competition. Each week he would sail or motor Jennifer to and from the course, a journey of about 1 ½ hours, to ‘champion’ her in the race. This was an enormous commitment to Couta Boat racing.

In early 2009, on that memorable day of ‘Black Saturday’ when the temperature soared to 47 degrees Celsius and fires raged across Victoria, Jennifer was in her pen at Martha Cove. Concerned that Jennifer’s timber construction might succumb to the intense heat, Mark travelled to Martha Cove and threw buckets of water over the deck; at the same time he heard the deck timbers cracking. The heat was so extensive that the water evaporated immediately. However, Jennifer remained intact.

In the following year, Jennifer was sold.

Custodians: Craig Cumberlidge and Mark Waterworth; Early 2010 – Present
After selling his share in Lisa C71, Mark Waterworth purchased Jennifer in 2014 with Craig Cumberlidge who had been crewing on Lisa. At the time, there was a demand to own a traditional Couta Boat for racing, but few were available. Jennifer was discovered at Safety Beach marina, and after the purchase she was sailed competitively in the Division 1 fleet at SSCBC.

In addition to the regular Saturday racing, Jennifer has competed in regattas around Port Phillip, including: Sail Melbourne, later known as the ISAF Sailing Regatta out of Sandringham and St Kilda, and the Wooden Boat Festival at Geelong. In the 2014 Wooden Boat Festival, Jennifer won the Corio Bay Couta Boat Cup.

Craig and Mark worked to establish a core crew comprising Richard Brearley, John Fairfax and Peter Young. And over the years, they have made a series of improvements to Jennifer, including: a new laminated mast, extending the boom, building a lightweight rudder, replacing the sails and improving the centre-plate. Also, they installed a new Yanmar 3 cylinder 20 hp more powerful replacement motor, capable of  making way in heavier seas.

Jennifer carries a lot of ballast, so she powers well through the heavier seas. But no matter how well a boat is fitted out, there comes a time when the crew’s seamanship is tested. In 2014, when Mark, Craig and Richard were returning to Sorrento from a Sail Melbourne regatta in a 20 knot northerly astern, their mast failed and came down. On a quick inspection they could see that it was rotted at the yolk and needed an instant solution if they were to safely continue their journey. They jury-rigged what was left of the Oregon mast and continued on their merry way. But that was the last time they sailed up the bay!

Custodians: Sue Neales and Mark Waterworth; Jan 2022 – Present
In January 2022, Sue Neales, a regular Couta Boat crew and, previously, a sailor at the Sorrento Sailing Club in the 1970s, became a part-owner of Jennifer and joint custodian with Mark Waterworth.

As one of the few women who has a financial share in a Couta Boat at SSCBC, Sue is intent on promoting the involvement of women and girls in sailing. Currently, she is a member of the Australian Sailing ‘She Sails’ Victorian committee.