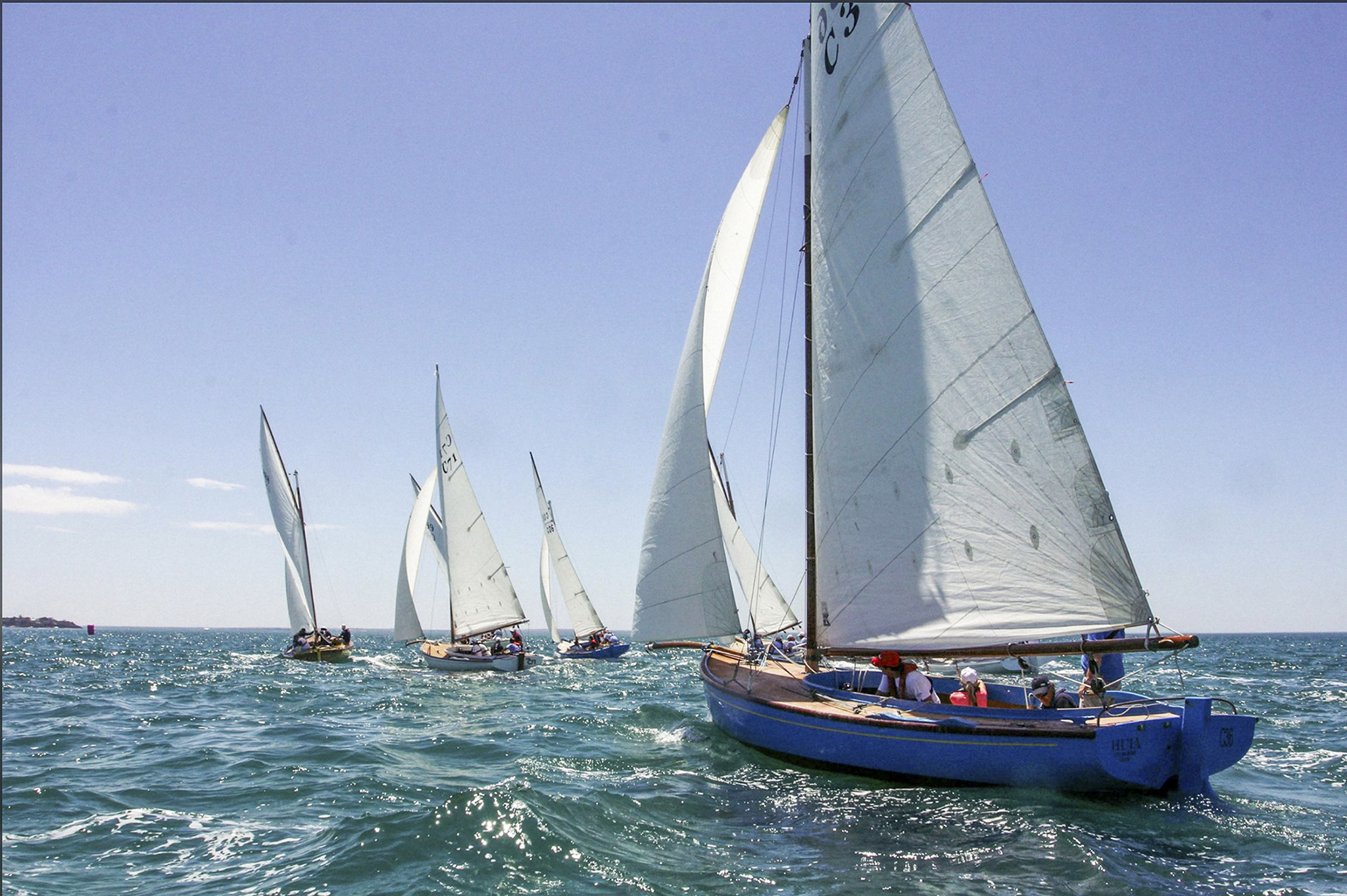 Jack Beazley, retired Port Phillip Sea Pilot and grandson of Walter Todd, says she was a beautiful, carvel-planked boat and regarded as 10 years ahead of her time for her innovations, including a ton of lead bolted to her keel as ballast, a centre-plate that went through the lead and a self-draining cockpit. This made for fast sailing and improved processing of fish: the fish catch could be thrown in the cockpit and after gutting, the entrails would be flushed out to sea. Her fishing grounds were Bass Strait and Port Phillip; wherever fish were biting.

At the launch of Huia, the local Queenscliff newspaper reported:

Assistant Treasurer Mr Casey christened the 26 ft fishing boat near the Fisherman’s Pier…Mr Casey named the boat Huia, wishing her Godspeed and prosperity. He congratulated the owner, Mr Sydney Todd, on his enterprise, and the builder, Peter Locke, on his skill. The Huia is almost unsinkable. She has enclosed decks and valves in the cockpit which allow shipped water to escape.

It’s understood this new fishing boat was named after a grand New Zealand trading schooner which was famed for breaking the sailing record for a fast passage between New Zealand and Melbourne. In turn, the original Huia took her name from a revered New Zealand bird regarded as a symbol of nobility and leadership in the Maori culture. Quite an auspicious title!

Jack Beazley says while she was a fast sailing boat, there were problems when drift fishing, as the heavy lead frame contributed to an uncomfortable roll and jerk. Before long, Peter Locke was tasked with removing the lead.

Custodian: The Everett Family; 1940s
Huia was sold a couple of times after Syd Todd’s custodianship. And during World War II, Jack says the next owner was the Everett family of  San Remo on Phillip Island, who fished for ‘couta and crays in Western Port Bay, Victoria.

Custodians: The Burnham Brothers; Early 1950’s – Early 1970s
Then during the early 1950s, the Burnham brothers of Rosebud, Victoria purchased her. Tim Phillips recalls a story told by fisherman Andy Johansen who was asked to pick up the boat from San Remo and deliver her to a mooring in Sorrento.

Andy set off late from San Remo, after having visited the local pub, but by the time he reached Flinders, less than a third of the way, it was well and truly dark and he had to tie up for the night. It’s not clear what happened next, except the story goes that the Burnham’s probably took her from there.

The Burnham brothers sent her to Cayzer Boats in Queenscliff for maintenance and significant modifications, including removal of the centre-plate case and replacement of the motor. Steve Burnham, son of one of the founding four brothers, says the original motor was a Rugby engine, which was a type of car in those days and quite typical of the early motors for boats. It was replaced by a big Thorneycroft diesel, placed in the middle of the boat where the centre plate had once been.

For many years, Huia was used for commercial fishing in and outside Port Phillip; ‘couta, snapper, flathead, gummy shark were prolific. Steve Burnham says she was known as the ‘27 footer’ rather than by her name and he remembers one person would go up the mast on the bosun chair to spot for fish, then when ready a net would be thrown out. They also used long lines studded with hooks which could go on for miles, until in the mid-1960s when this form of fishing was severely curtailed.

By the early 1970s, commercial fishing in Port Phillip was declining, fishermen were retiring and the old wooden boat was no longer needed by the Burnham’s and was languishing in their yard at Rosebud. It was now that a new owner appeared on the scene, Terry and Victor Mulder, whose father had a house at Rosebud and who was also a friend of the Burnham’s.

Custodians: Terry and Victor Mulder; Early 1970s
Custodian: Victor Mulder; 1970s – Present
Victor says his father would sometimes join the Burnham brothers out fishing. His enjoyment of fishing and sailing was passed on to his sons, and when Victor saw the old boat in the yard, his offer to buy her was accepted. Brother Terry also came in on the purchase but he was later to sell out to Victor. This was the early 1970s. At this stage, Huia’s large diesel engine was in the centre of the boat, there was no centre-board and her name was then unknown.

Victor recounts many happy times and adventures fishing and sailing around Port Phillip with family and friends. Initially Huia was exclusively for fishing exploits, plenty of yellow tail and snapper, and for scuba diving around The Heads. Then Victor decided to make a sail at his canvas manufacturing and supply business, which happened to employ a couple of sail makers. He fitted the boat with blue canvas sails and believes he was the only person sailing a Couta Boat off Sorrento at that time, about 50 years ago in the early 1970s.

Victor competed in the first Couta Boat race in the waters off Portsea, in the mid-1970s. This was organised by Marcus Burke and Tim Phillips. Tim says the Mulders were unsure about the name of the boat:

So to spice things up, I called her ‘Sorrento Flyer’. It was only later that I researched and realised her name was Huia, and naturally suggested to Victor to revert to her proper name.

Victor says Huia was a fast boat downwind, but otherwise quite heavy and the absence of a centre-board made racing somewhat difficult. It was a few years later the Wooden Boat Shop was employed to undertake a total restoration adding a centre-board and removing the cabin. Over the years, Huia has participated in many Couta Boat Club races and has won a few.

Today, Huia continues to be enjoyed by three generations of the Mulder family.

Raced in the first Couta Boat race off Portsea.