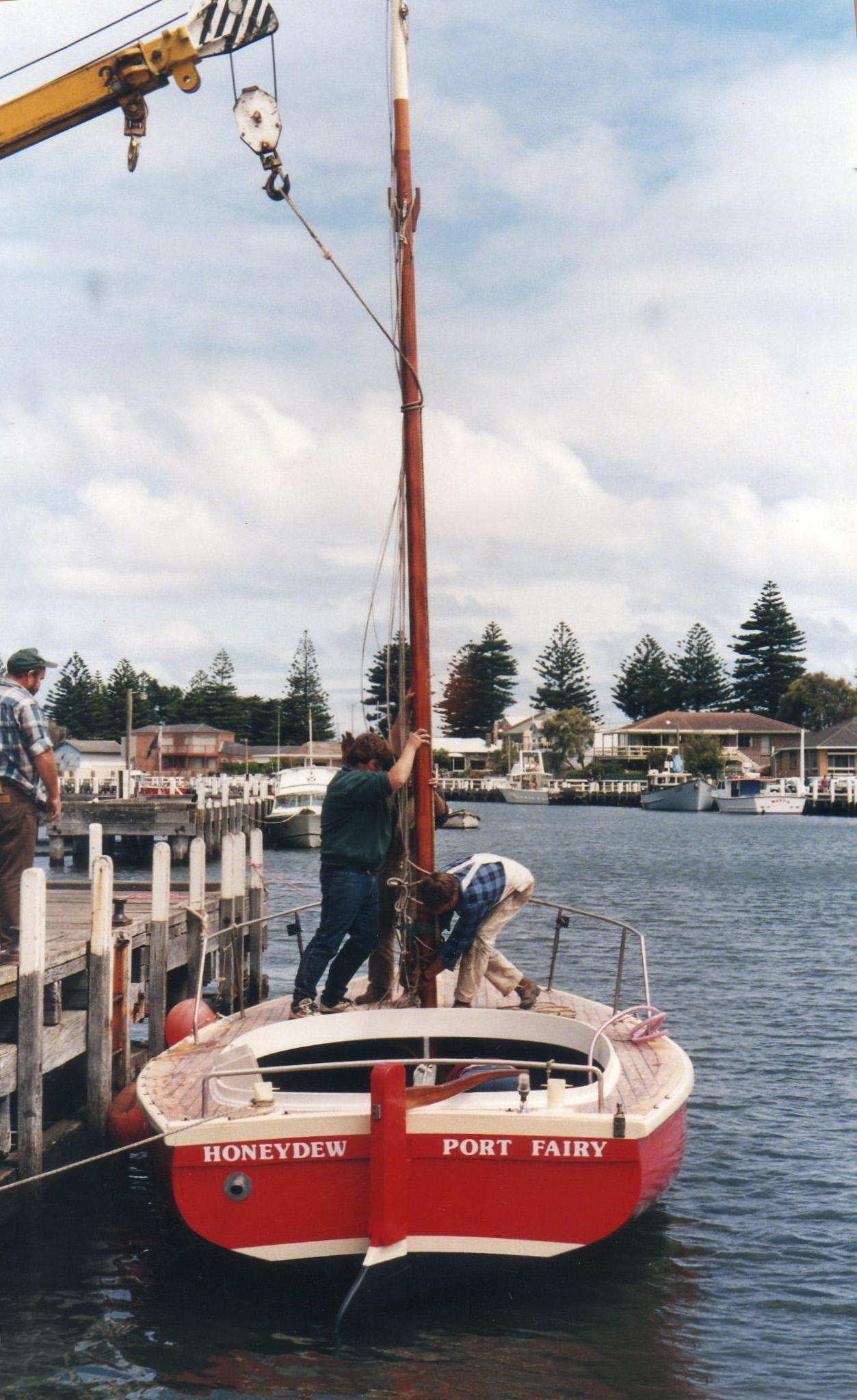 Early Years
There is some conjecture around the date of the build of Honey Dew, as the name and location of the original builder is not known. It is likely she was built in the mid 1940s, but Port Fairy boat builder Garry Stewart suggests that she was built circa 1960s from a 1940s Couta Boat design. She is 26 foot in length.

Custodian: Pat Matthey; 1960s (perhaps)
Custodian: Des Phillips; Unknown dates
There are also varying views as to where Honey Dew was located in her early years. It is believed that she fished for many years in Bass Strait and possibly out of Flinders Island, Bass Strait, Victoria until the 1960s, when Port Fairy fisherman Pat Matthey took custodianship and utilized her for fishing in that area.

After the period of Matthey’s custodianship, Honey Dew was owned by Des Phillips who was a farmer in the region. Des fished out of her for a few years, mainly sweep fishing for flathead and also catching pike along the shore.

In the late 1990s, Brian decided to refurbish Honey Dew and engaged local Port Fairy boatbuilder Garry Stewart. As Brian had previously worked for Garry, he was able to assist. Together, they refitted the top deck with Merbau, added a top plank to allow for more freeboard, replaced the side-coaming with a Celery Top timber, and fitted a centre-case and a new Yanmar 30 hp diesel to replace the old Lister engine. Honey Dew was also fitted with a smaller rig for sailing, and the hull colour was changed from white to bright red, with a black trim and a black coaming rail.

Brian continued to mainly use Honey Dew as a fishing vessel and only occasionally set the sails. But when pressed for spare time to undertake the maintenance routine, he decided to sell her.

Custodian: Nick Roach; 2008 – 2009
In 2008, Honey Dew was purchased by Nick Roach of Sorrento, Victoria. Nick owned her for only a short period when he sold her to John Pincott from Gippsland, Victoria.

Custodian: John Pincott; 2009 – 2014
In the next six years, Honey Dew was used by John and his wife for recreational sailing and motoring around the Gippsland Lakes. However, John was to discover that Couta Boats are a heavy-timbered craft and not as aerodynamic as modern yachts, so sailing two-up requires some brute strength, particularly in strong winds. Reluctantly, John and his wife came to the conclusion that sailing Honey Dew, at times, presented more challenge than pleasure. In dry dock, Honey Dew was regularly maintained by Frecheville Heaney Boatbuilders in Paynesville, Victoria so finding a buyer was not a difficult process.

Custodian: John Foley; 2014 – Present
The new custodian John Foley purchased Honey Dew in 2014 after he had spent some time admiring her lines as he worked around the boatyard where she was in dry dock. John declared that from the moment he set eyes on the fine lines of Honey Dew, he wanted to purchase her.

She was just one of those Couta Boats that I admired and thought that one day, maybe…?

After the purchase, John fitted Honey Dew with a new set of sails. He continues to use her for recreational sailing on the Gippsland Lakes and competes in the twilight sailing fleet on a regular basis. She is moored at Raymond Island, Victoria.

In 2020, Honey Dew underwent another refurbishment, including a new sole. John maintains that she was in very good condition when he purchased her, but as is the case for all wooden boats, she requires constant maintenance.