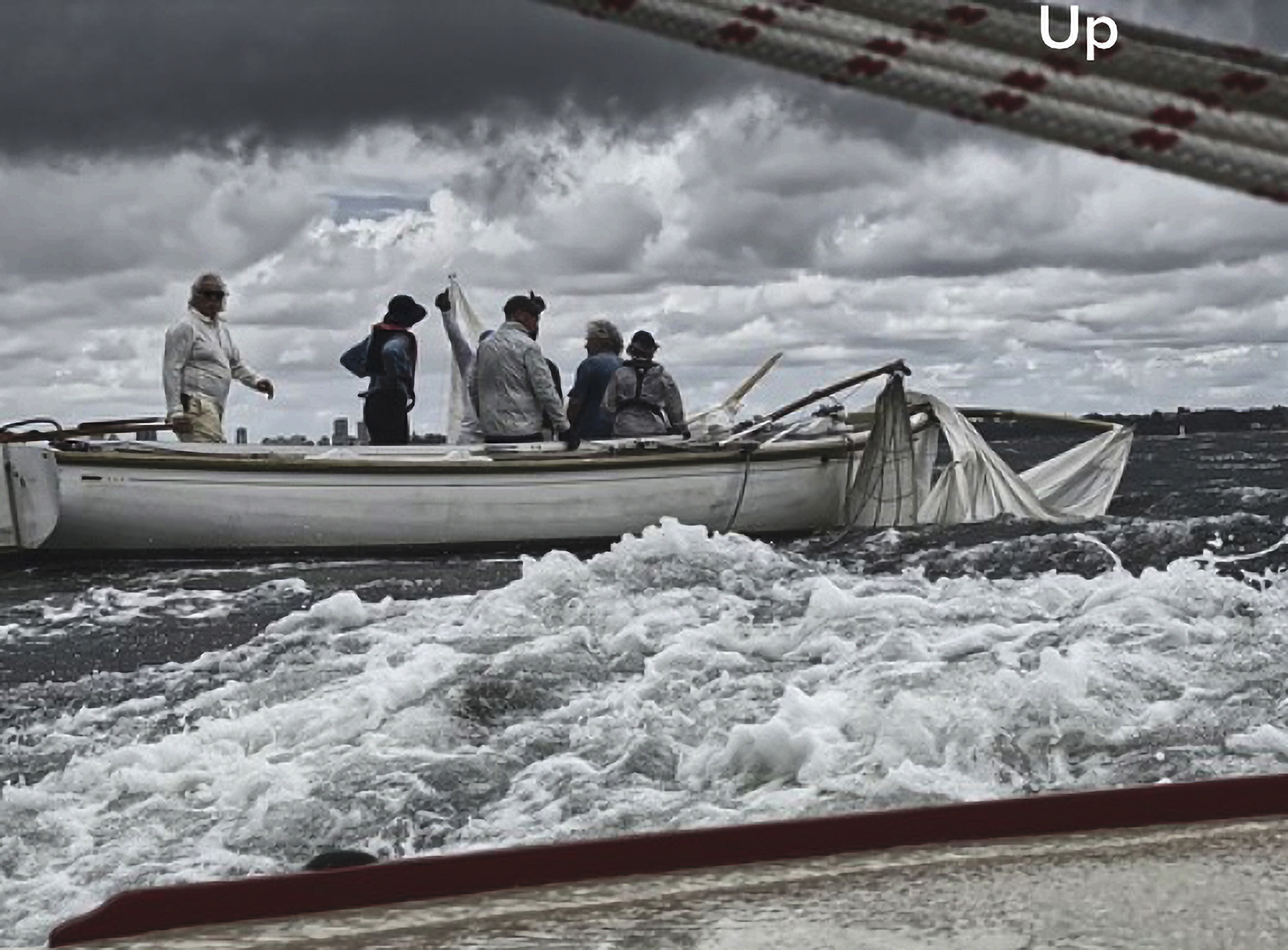 Designed by Ken Lacco / Built by Will Baillieu

Early Years
Hero was designed by Ken Lacco in 1979 and built by Will Baillieu under Ken Lacco’s supervision at the Lacco shed at Newhaven, Phillip Island, Victoria during 1980.

Custodian: Will Baillieu; 1980 – 1985
Will Baillieu can claim to have laid a foundation for the continuing tradition of the building of Couta Boats. She was the first to be registered in the newly formed Couta Boat fleet in the waters off Sorrento and Portsea, at the southern end of Port Phillip, Victoria. In due recognition of her status, she was given the sail number C1 when the Couta Boat Club (CBC) was first constituted.

Hero is built of Huon Pine on Kauri ribs, with Silver Ash being used for extreme bends in the tuck. The keel is built from the backbone of Yellow Stringybark, while the deck is built of Celery Top Pine. She was originally painted white but in 1982 she was re-painted black, with a white boot top and gold streak.

After the construction was finished, Will Baillieu, accompanied by Tim Phillips, Clive Beckingsale and Peter Burke, sailed Hero from Newhaven on Western Port around to Port Phillip, on a day when there was very fresh wind and an ebb tide. And while coming through Port Phillip Heads, they witnessed their mates capsize in a danger zone known as the Rough Up, where the depth goes sharply from 60 foot to 360 foot and then back again. This can create a virtual ‘underwater fall’, whirlpools and huge standing-up seas when the tide is ebbing and there is an S-SW wind. In this zone, a crew fell overboard but he was later retrieved.

Of interest, the name plate on Hero’s transom is carved out of Huon Pine by Jason Monet, rumoured to be a great grandson of the famous French impressionist, Claude Monet. Jason Monet is a sculptor and wood carver and lives on Phillip Island.

Custodian: Arthur Meredith-Smith; 1985 – 1994
Will Baillieu sold Hero to Arthur Meredith-Smith in 1985. And in the following year she had a major refit and upgrade including a new sail plan with upgraded boom, gaff and a larger centre-plate. Of note, the engine cover name-plate was based on Laurent Giles’s 1936 name-plate for Andrillotm, the first yacht of his Vertue Class to be built. In addition, successive suits of sails were used to produce a neutral-balanced helm. Arthur declares that, due to her full sections and hard bilges compared to the rest of the fleet, Hero was a joy to sail in 15 to 20 knots and that his crew of three could easily handle the heavy conditions.

Hero was relaunched in 1986 in challenging circumstances. As the Sorrento Boat Ramp was closed, the boat was trucked to the Rye Boat Ramp:

A strong nor’easterly was whipping up. With a completely bare boat – neither mast nor ballast, and with much trepidation, we motored out from Rye into the slop. However, our worst fears were quickly put to rest as Hero settled back on her full stern; it was pleasantly downhill all the way back to the Sorrento mooring.

Arthur also recalls that when the upgrade was completed, the two Baillieu-built boats Hero and Ajax were competitively tested against each other in a ‘drag race’ from a buoy off the Quarantine Station back to Sorrento. The larger Ajax pulled slowly ahead, and Hero could only restore the deficit by picking up a lift when heading into the mooring after rounding Point King.

In the 1990 Port Melbourne lagoon race held at the top end of Port Phillip, Hero was involved in a port-starboard altercation. Lonsdale attempted to cross Hero but changed to go astern, racking Hero’s deck with her jibboom as she swung away. Lonsdale’s jibboom finally shattered as it hooked under Hero’s stern-horse, whereupon Lonsdale’s rig completely collapsed. Hero’s rudder was severely damaged. After this incident, a larger rudder built by Tim Phillips of the Wooden Boat Shop was installed.

Custodian: Tony Unmack; 1994 – 2000
Later, in 1994, Hero was sold to Tony Unmack and was penned at the Royal Freshwater Bay Yacht Club (RFBYC) in Perth. By then her colours had been changed to a white hull and brown decking.

Under Tony’s custodianship, Hero was maintained in pristine condition. He fitted her with a new floor of Queensland Beech in about 1995; Chris Phillips painted her black every year between 1994 and 2000 and kept the deck oiled weekly; the rubbing strake and bowsprit was dark federation maroon, and the pin stripe was stickered gold. Also, at that stage she had a single piece mast. But around 1995, the bronze tabernacle was introduced by Chris Bowman and installed on a number of the RFBYC Couta Boats, which allowed the mast to be lowered by hand under the bridges instead of lifting it out with a crane at RFBYC and back in again at Fremantle Sailing Club.

Tony was super proud of Hero and had many years of good sailing, with some epic twilight races when the champagne and rum flowed.

Custodians: John Bond, David Carter, Kim Gamble, David Stirling and Paul Sullivan; 2000 -2004
Tony Unmack subsequently sold Hero to a syndicate headed by Paul Sullivan and Kim Gamble in 2004. She was fondly remembered for her on water participation in the Saturday races, family twilights and giving sailing lessons to many future sailors from the syndicate’s offspring. Within a few seasons, however, work and family commitments impacted on the reliability of syndicate members to race regularly, so the decision was taken to sell Hero.

Custodian: Matthew Giudice; 2005 – 2012
In 2004, Paul Sullivan sold Hero to a syndicate headed by Matthew Giudice. Unfortunately the RFBYC Race Record does not hold any results for Hero during Matt’s custodianship. It was during this period Hero fell on hard times, finding herself no longer on the Swan River ‘but in a makeshift pool with no water.’

Custodians: Rob Cameron, Marty Jurat and Peter Wauchope; 2013 – 2015
By 2013, Hero was found by Marty Jurat in the backyard of Mark Foti looking unloved and miserable. He found Hero in a hole with a trap that was to hold water, preventing her from drying out; unfortunately there was no water. Marty pulled together Peter Wauchope and Rob Cameron and the three of them started the restoration of Hero to her former glory. This eventually led to Hero once again taking her rightful place among the Couta Boat fleet at RFBYC. The refit led by Marty, Peter and Rob was extensive. They sunk Hero at her pen expanding the hull boards, then raised her and set about a 12 month full detailed restoration.

By 2017, Marty Jurat and Dermot O’Keefe had left the syndicate to take on the custodianship of Ajax. The results of drag racing against Ajax are the same today as they were in 1985; Hero could only enjoy a view of Ajax’s stern. However, thanks to Marty, one more Couta Boat is now sailing on the Swan River.

To this day, Hero races as she was designed, enjoying a steady 15 to 20 knots wind. Unfortunately, in the 2018 State Championship with the wind conditions idyllic at SW 22 knots, David Capozzalo’s enthusiasm to race created an unfortunate accident. He drove Hero into a wharf plying, breaking her jibboom while exiting the harbour. The owners could only sit and watch the state finals from the side lines.

Most recently, on 14th November 2020, Hero again met with disaster at the Governor’s Cup. She took to the Swan River on a 15 to 20 knot gusty southerly, just the kind of wind she is built for and she was enjoying herself. She had passed the lead boats as she came to the first mark (Squadron mark), holding her position to Bartlett on a reach. She settled down for a run to Commo, being driven hard by Andrew McMillan to hold her position against all competitors. Unfortunately, a 30 knot gust cracked her mast in the middle and deck levels, leaving her adrift; her competitors swiftly passed by, checking all were safe. David Capozzalo was at the helm, but the incident did not deter his love of sailing and of Couta Boats. David says:

That is the fun of Couta racing, creating rum stories good or bad that get passed on from sailor to sailor, but the boat is a constant.