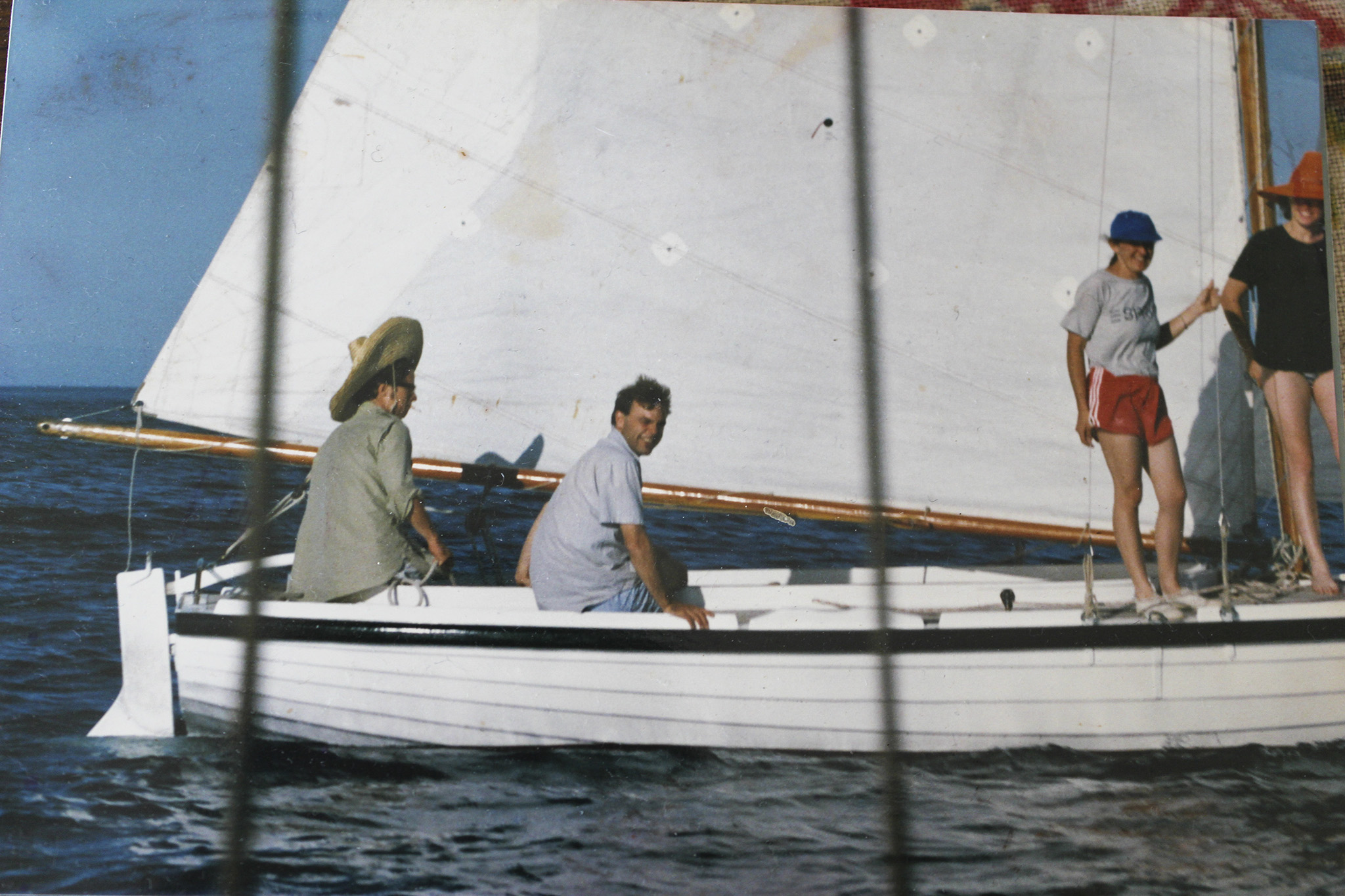 Custodian: Colin Ferrier; 1937 – 1946
Custodian: Jimmy Dean; 1946 – 1976
The 20 foot Couta Boat Helen was built by Ken Lacco in Rosebud, Victoria, circa 1937, for Queenscliff fisherman Colin Ferrier who used her for fishing out of Lorne on the south-west coast of Victoria.

Jimmy Dean then bought Helen from Colin Ferrier in about 1946, as Colin was leaving the industry to move to Queensland. He took Helen to Corinella, Western Port from where he used her for recreational fishing; she even had her own slip way. She had a rugby engine in her when her next custodian Tim Phillips purchased her in 1976.

Custodian: Tim Phillips; 1976 – 1981
Helen is regarded as being pivotal in the revival of the Queenscliff fishing Couta Boat as a sailing boat in the 1970s and onwards. Her structure provided the design which was adapted by Tim Phillips of the Wooden Boat Shop (WBS), Sorrento and others as they embarked on building Couta Boats primarily for racing on Port Phillip.

The first modern day gaff-rig race of the Queenscliff fishing boats was held by a small group of owners off Portsea in Victoria in 1975 when up to six local boats turned up on a particular day, with most battling just to get around the course.

Tim Phillips purchased Helen in 1976 from Jimmy Dean’s widow at Corinella after answering an advertisement in the Melbourne Age newspaper: ‘Boats, marine engines & fishing gear’. He paid the full asking price of $3,000.

After the purchase, Tim recalls the trials of setting up Helen for racing, at a time when there were perhaps only two surviving gaff-rig boats on the whole of Port Phillip.

The first year I purchased a new set of sails for the Gaff Rig Cup of 1977. The sails were massively too large and on race day it was a nice light breeze. We were first over the finish line by at least half-an-hour! The next year, after extensive consultation with the Queenscliff fishermen, I went to Col Anderson for the right set of sails. Col was in Gladstone Street, South Melbourne at that time and the sails were developed from those used by the cadet dinghies, of which Col was the main sail maker.

So taken by Helen’s beautiful lines and sailing proficiency, Tim decided to have her fully restored and took her to Gavin Jones of S&J Boat Builders, in the winter of 1977. At the same time, the small group of owners who were sailing Queenscliff fishing boats out of Portsea, became aware of the vessel’s history, specifically its primary task of fishing for barracouta on Port Phillip and beyond The Heads. So the term ‘Couta Boat’ was adopted as the boats assumed a new role as a gaff-rigged sailing boat for racing.

Throughout the 1980s, the Burkes sailed Helen in the early fleet of Couta Boats that raced off Portsea and in the various regattas organised by the Couta Boat Club (CBC). They also used Helen for recreational sailing, fishing, and surf trips to Corsair Rock, which is a reef located at Point Nepean, the entrance to Port Phillip.

On one occasion, Jane and Peter recall sailing back to the mooring at a time when Helen didn’t have an engine and discovering Tim Phillips holding aloft what was left of the mooring line, as some pesky speedboat driver had managed to sever the buoy. It was subsequently decided to install a motor which was completed by Jack Norling at the Sandringham Yacht Club yard.

After seven years of pleasure in being the custodians of the 20’ Helen, Jane and Peter took the opportunity to purchase the 26’ Wagtail in 1988. So Helen was sold.

Custodian: Gabrielle Hodgkinson; c1988 – Present
Prior to her purchase of Helen, Gabrielle Hodgkinson and two friends Patrick Hoppe and Jamie Hurley got together in 1986 to buy a little clinker whiting boat Hesperus from Len Dodson, who worked at the WBS in Sorrento. It was a lovely addition to life, having just moved permanently to the area.

The boat was, however, fatefully named, as she was wrecked during a storm about 18 months later. Around that time, the Couta Boat Helen was for sale and Gabrielle jumped at the opportunity. She had admired Helen as another clinker with beautiful lines, and thought she was an extremely pretty boat. Helen was painted in crisp white with a black chaffing batten, red antifoul bottom and two green patinaed bronze name plates screwed onto the bow. She looked perfect and this colour combination has not changed.

It was very exciting for the trio who wasted no time getting on the water. They went cruising at any opportunity, trying to learn as much as they could about sailing and always having a great time whether it was just putting about with friends, fishing, sailing or heading down to Port Phillip Heads to surf at the ‘Quarra’ (the Quarantine).

In that first year of owning the boat, the crew participated in the racing season and won 1st Place, Race 2, Petersville Series of 1989. This win was mainly due to having the Hoppes’ big brother Antony on the helm who was very well known for his great sailing skills.

A few years went by with similar scenes; dramatic racing days, sunset sails, Couta Boat picnics, lifting lead ballast and messy painting days at the yard. The excitement seemed to be infectious. It was hoped that Helen, owned by ‘20 somethings’ was to be an inspiration to other slightly younger boat owners.

Before long there were quite a few of their young friends buying themselves a Couta Boat or at least using their parents’ Couta Boat more often. There were James Smeaton with Lila, Liz Gibson with Mercury, James Gibson’s Rose, Jamie Hurley’s Fiona and Blair Sturzeker with Surprise. Some have subsequently sold their boats, moved overseas or built bigger boats, however, Gabrielle Hodgkinson and Liz Gibson still own their boats to this day.

Gabrielle married Richard Hodgkinson and together they had two daughters. The racing days in Helen seemed to be replaced by fair weather sailing days, picnics on board and the occasional Lady’s Skippers Race or the Portsea Cup, followed by the picnic. As the girls grew up, they had many a fun day swimming out to the Helen, moored at Lentell Avenue, Sorrento or going for a putt over to Queenscliff for the day.

Helen could not have fallen in safer hands than Richard’s, as his tireless and vigilant management of the boat, along with his extensive restoration project of Helen at the WBS, has helped preserve this ‘Jewel of the Bay’ for many years to come.