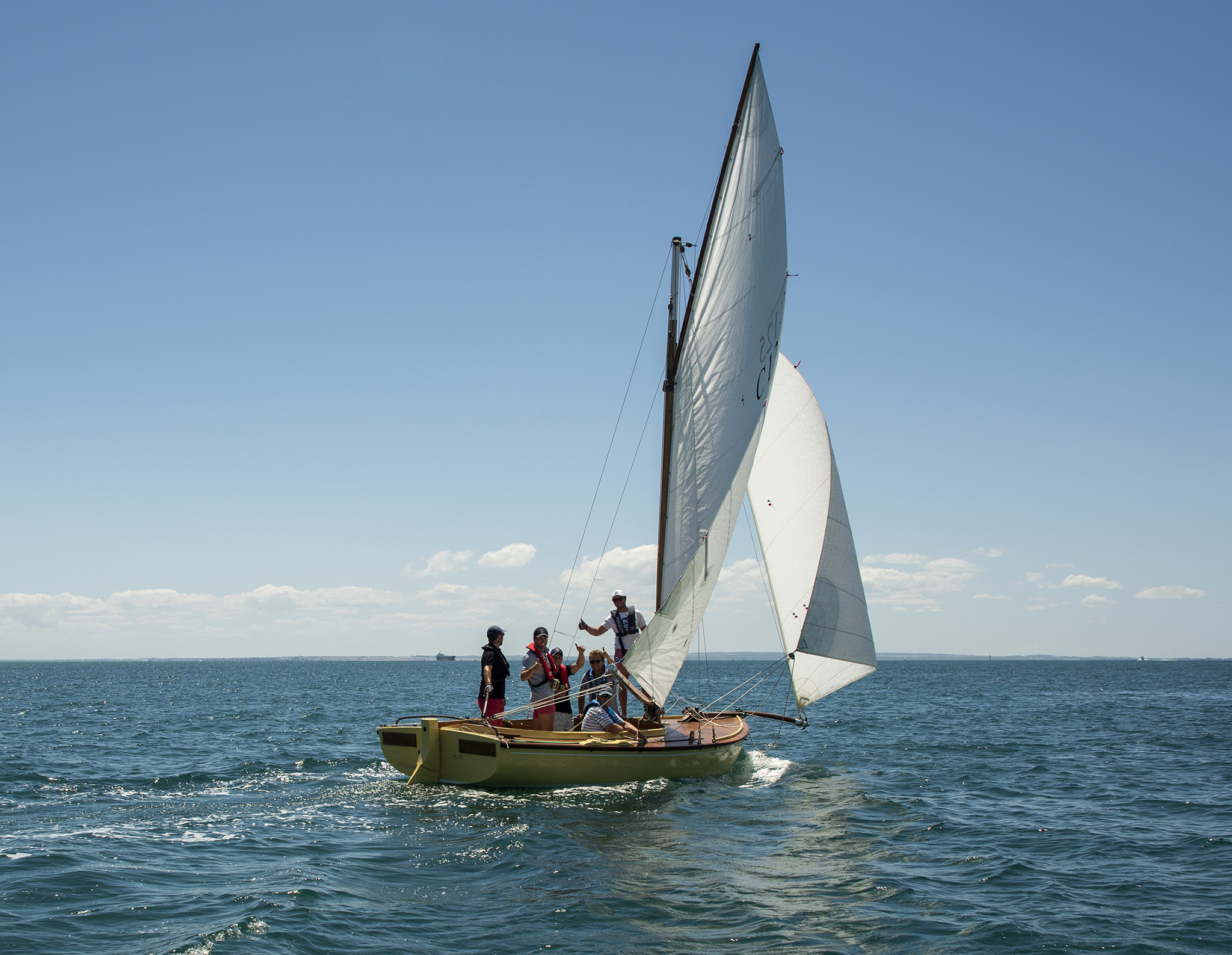 In addition to being used for commercial fishing out of Lorne, reliable sources believe that Harriet spent the last 20 years as a recreational fishing boat further along the Victorian coast, in Portland and Apollo Bay.

Harriet was previously known as Birgitta E and in her earlier years she was possibly called Arjay, as her tiller handle has the name ‘Arjay’ inscribed on it. On the other hand, the owners are well aware that the tiller could have been borrowed from another Couta Boat.

Custodians: Malcolm Bamford and Ian Beattie; 2001 – 2013
Birgitta E was renamed Harriet by her new custodians Malcolm Bamford and Ian Beattie who purchased her in Apollo Bay in 2001. Their version is that Birgitta E was in a sorry state of disrepair: in Malcolm’s words, a broken down family putt putt. They had been looking for a Couta Boat that was in need of some care and that could be their development project.

In early 2001, after being alerted to a ‘For Sale’ notice advertising a ‘Huon Pine Couta Boat hull’ in Apollo Bay, Malcolm, his wife and young daughter travelled to inspect it, on a hot 40 degree day. Birgitta E was on a swing mooring in the Apollo Bay Boat Harbour and Malcolm clearly recalls his initial sighting.

She was not a pretty sight with about 20 mm of bird poo on the deck, the motor with bits rusting in the bilge and quite a stench!

His interest quickly waned when his camera went to the bottom of the harbour and he scored a speeding ticket on the return journey. For Malcolm, the idea of a transaction was lukewarm at best, until his young daughter proclaimed that it had been a pretty expensive day!

At that point, my interest in the boat rose; I may as well salvage something!

After some negotiation, the interested party agreed to pay $3,500 if the hull was of Huon Pine or $3,000 if it wasn’t built of this sought after Tasmanian timber. The Wooden Boat Shop (WBS) in Sorrento gave a final verdict; it was not built of Huon Pine!

The boat was transported by the WBS to Ian’s garage in Sorrento, Victoria. Most of the restoration work was done by Len Dodson, a well-known local tradie and fisherman, with the owners assisting on the weekends. The boat was stripped back to her ribs and planks and rebuilt; even the gunwales were replaced. And in the process, the owners found a treasure of iron screws and nails in her, suggesting that she had been owned and repaired by someone other than a boat builder. After six months of work, their $30,000 to $35,000 budget was comfortably exceeded!

Once relaunched, Ian and Malcolm sailed Harriet in the Division 2 fleet out of the Sorrento Sailing Couta Boat Club (SSCBC), commencing in the 2002 season through to 2014 when Ian sold his share.

None of us had any sailing experience so we had some fairly interesting outings!

It was time to conscript another mate, an experienced sailor, Shaun Chalmers, to take control of the helm. After about 18 months of helming Harriet, the boys decided to ‘gift’ Shaun a share in the syndicate as a wedding gift: they chipped in 2.5% each and the five of them were then custodians of 10% each.

Since 2014, Harriet has been successfully campaigned out of SSCBC. In the 2019 season, she was declared the Division 2 Handicap winner of the prestigious Portsea Cup.

In December 2020, the Harriet syndicate had a further change with the addition of Richard Wright and Alister Wright; shares were adjusted so that the syndicate now comprises eight equal shareholders. However, two of the syndicate have since moved beyond Victoria, so getting a crew together to campaign Harriet remains a constant challenge.

Malcolm, a Life Member of SSCBC, died suddenly on 29th March, 2021. The Harriet crew will continue to race her at SSCBC in honour and memory of Malcolm.