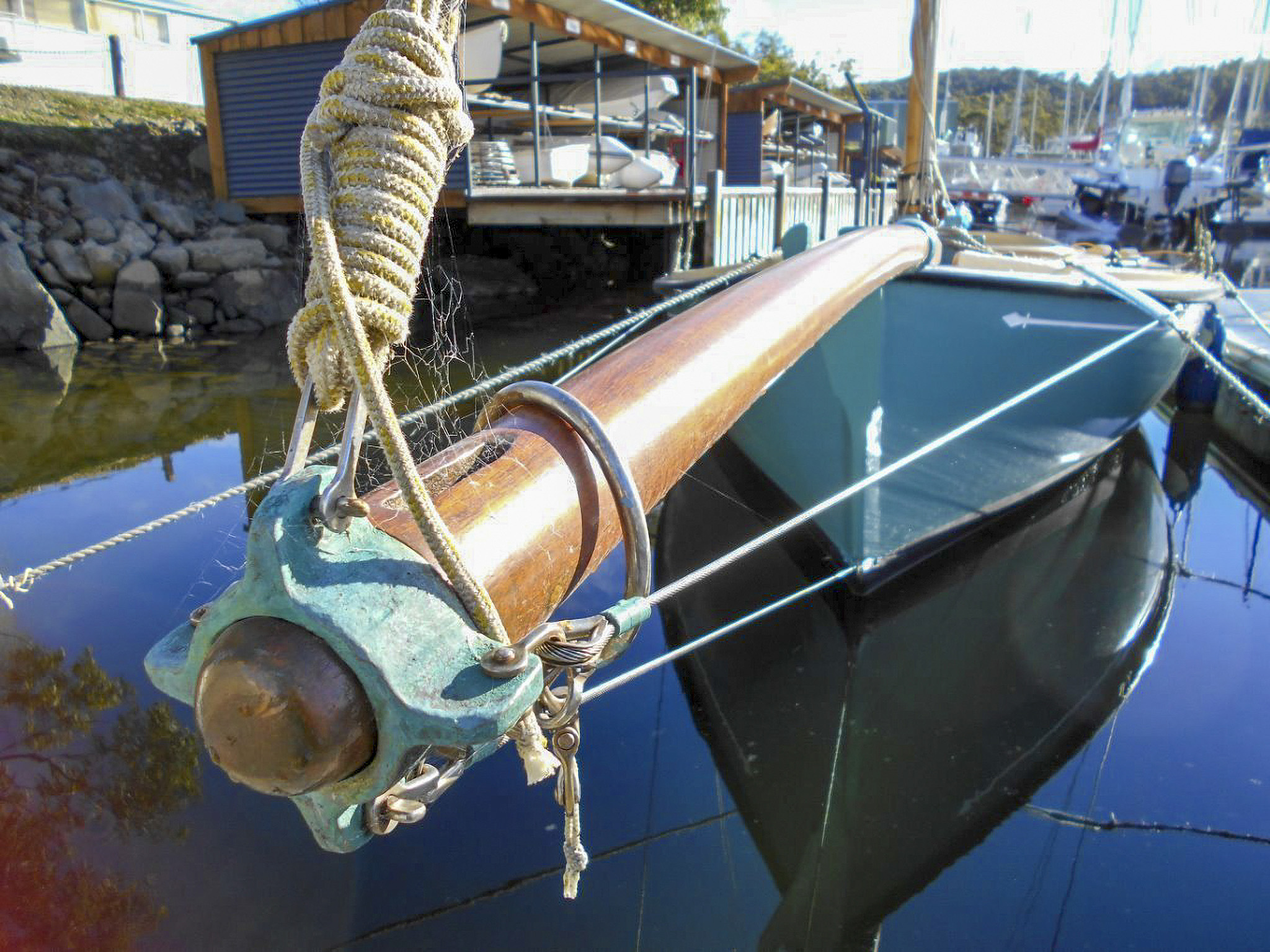 Early Years
Greta was built by Bob Cayzer in Queenscliff, Victoria in 1950. It is understood that Greta was the ninth boat built by Cayzer Boats after they bought Peter Locke’s boatbuilding business. She was built for keen amateur fisherman Ron Baillieu of Sorrento.

Custodian: Ron Baillieu; 1950 – 1980s
Will Baillieu recalls his uncle as being an expert fisherman, better than a lot of the pros. He used to fish from Greta for snapper at the Goorangai snapper mark near Port Phillip Heads. Will claims he was very possessive about this mark, as though it was his own.

He was prone to remind the occupants in the other boats that this was his territory. He had a peg board across the back deck and he would peg his tiller across until Greta swung out and bumped into any boat that had come and anchored next to him. If a boat then anchored on the other side of him, he’d remove the peg and Greta would swing back over and Ron would start the cursing once again. If a boat wouldn’t move, he was known to hurl a 2 lb lead sinker or two at it, but usually it just led to the other boat upping anchor and getting away as quickly as they could.

Ron Baillieu sold Greta to Gary Crittenden in the 1980s.

Custodian: Garry Crittenden; 1980s – 1993
Garry bought Greta in the hope that he could renew his love affair with sailing that originally came about when he built and owned the Cunningham designed ‘C’ Class Catamaran Aeolus in the early 1960s and well beyond.

Sorrento boatbuilder Tim Phillips went to collect Greta from Ron’s front yard where it had sat for years and it almost fell apart in transit to his boat yard in Sorrento, Victoria. It was in need of a total restoration. Garry attests,

Tim did a marvellous job in restoring her to ship-shape and eventually relaunching her.

After the restoration, Greta remained in the southern waters of Port Phillip for the next 10 years or so. But as it turned out, Garry’s aspirations were somewhat ambitious. He had underestimated the time commitment in establishing his vineyard, then known as Dromana Estate but now called Crittenden Estate, which he planted in 1982. Hence, there was little time left to sail Greta.

Apart from the occasional pleasure cruise around the South Channel Fort, Greta sat on her mooring in Camerons Bight, Blairgowrie at the southern end of Port Phillip seemingly unloved. On the days when Garry did take her out:

I bored any passengers stiff with outrageous tales of the ‘good old days’ when we ripped up and down the South Channel with Aeolus, on a broad reach towing at least one and sometimes two water skiers. That’s a fact!

At the same time, Garry not only owned a C Class catamaran, a Couta Boat and developed a vineyard; he was also learning to fly single engine aeroplanes out of Tyabb.

It was a lot simpler to run over there, jump in the Cessna and build up his solo hours while taking a good look at the Peninsula from the air, including low passes over Greta in Camerons Bight.

Eventually, the reality of misplaced ambition dawned on Garry.

I’m a famously slow learner, or maybe my wife said, ‘Why don’t you sell that bloody boat, it owes you a motza and you never use it!

So Greta was sold to Chris Oldfield in 1993.

Custodian: Chris Oldfield; 1993 – 2011
For the first two years of Chris Oldfield’s custodianship, Greta was used primarily as a pleasure sailing boat, as well as for some competitive sailing in the Couta Boat fleet out of the Sorrento Sailing Couta Boat Club. However, at the time Chris was involved in race management so he did not find the time to sail her often.

When Chris relocated to Hobart, Tasmania in 1995, he took Greta with him. She was transported across Bass Strait by Tim Phillips of the Wooden Boat Shop. On this trip, Tim visited Victoria Dock in Melbourne and bought Storm Bay.

For a short period, Greta was used for pleasure sailing on the Derwent River, Tasmania until Chris relocated north to Launceston where she was moored on the Tamar River. But as the river is subject to an extreme tidal flow, it presented some particular dangers to Chris, in terms of both mooring and sailing Greta.

A veteran Sydney Hobart Yacht Race sailor, Chris was well equipped to cope with dangerous seas. But nothing had prepared him for one terrorising journey when sailing Greta down the Tamar River to Trevallyn, a riverside suburb of Launceston, Tasmania. A most severe gale blew from the south and with the competing forces of the wind and the tide, waves were swamping the boat as Greta punched through the water. The rig had to be strapped to the deck so the boat was totally dependent on the diesel engine. A trip that should have taken a few hours took over six, much of that in the dark. The time of arrival at his destination was midnight. Chris was happy never to repeat that journey.

When the Oldfield family relocated back to Hobart, Greta returned to the Derwent River for a time and then to Kettering, located on the D’Entrecasteaux Channel, between Bruny Island and the south-east of the mainland of Tasmania. And finally, to a mooring in front of the family home in Coningham, on the shores of the Channel.

The family has retained many memorable moments spent pleasure sailing and cruising on Greta in the Derwent River and the D’Entrecasteaux Channel.

We used her a lot; she was a most loved family member. We used to have regular picnics on Bruny Island, which was five nautical miles across the Channel.

When Chris and his family relocated to an overseas destination, Greta stayed behind in southern waters and was maintained by Chris Moncrieff. But on his return, Chris decided to purchase a Currawong 1970 to sail further afield along the Tasmanian coastline.

After 18 years of service to the Oldfield family, Greta was sold to her next custodian, Phil Jeffs from Kettering in southern Tasmania.

Custodian: Phil Jeffs; 2011 – Present
In his childhood, Phil and his family had spent weekends at Rosebud and Rye, coastal towns on the Mornington Peninsula, Victoria and recalls seeing Couta fishing vessels owned by the well-known Burnham family, being hauled across the sand at Rosebud. His interest in Couta Boats followed him into adulthood.

Phil uses Greta for pleasure sailing and intends one day to showcase her in the biennial Australian Wooden Boat Festival in Hobart.