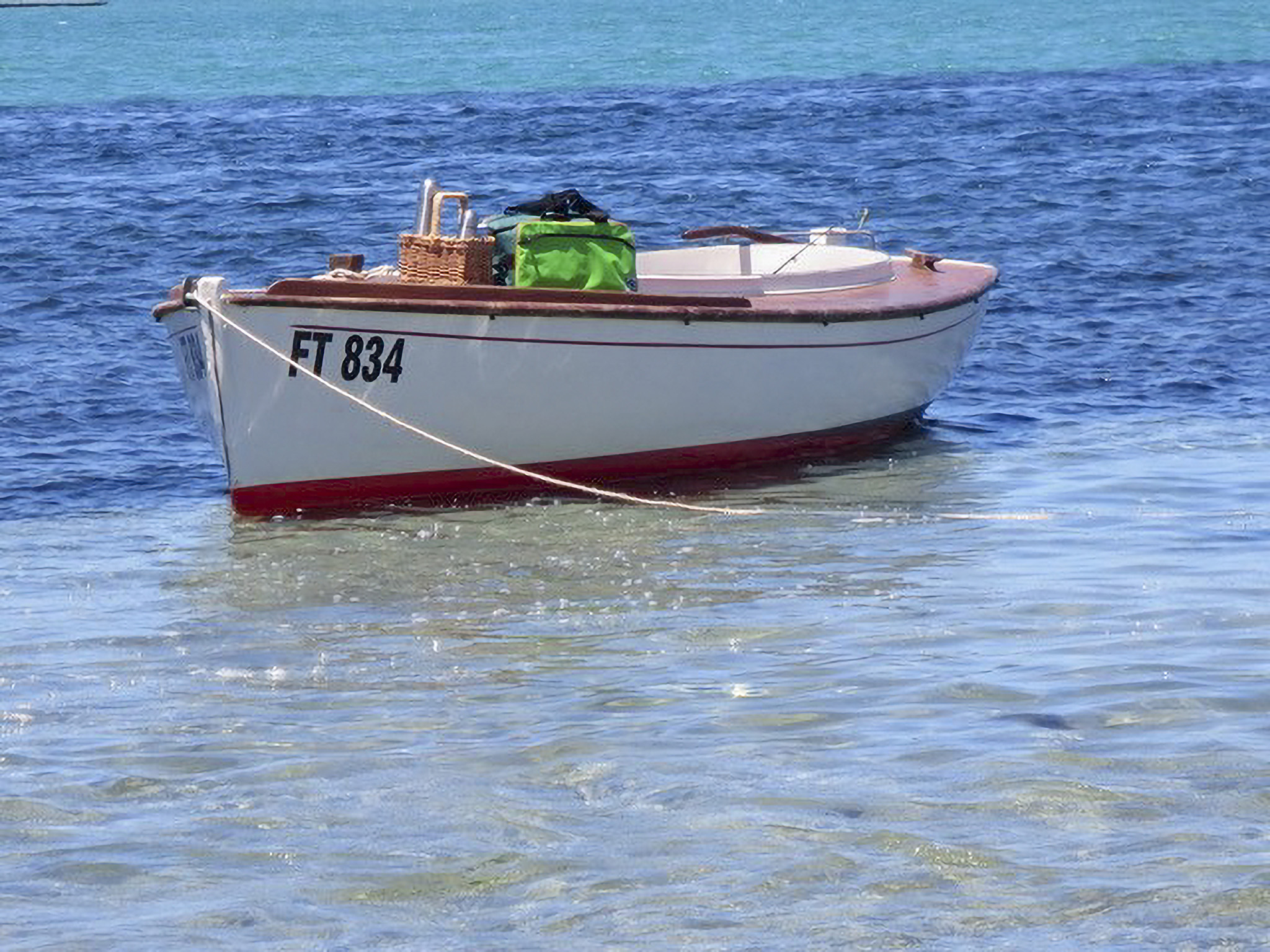 Custodians: Bill and John Mitchell; 1954 – 1956
Anne was built by Alec Lacco in 1954 in a big shed behind the Lacco home in Lyons St., Rye, Victoria for a local ‘couta fisherman Bill Mitchell and his brother John, who lived across the road from Ken Lacco. Her hull is constructed from New Zealand Kauri Pine with ribs of Celery Top Pine. She was fitted with a single cylinder air cooled Deutz engine with a piece of aluminium mast as an exhaust.

She was named Anne and photographed on the day of her launch from the local jetty in Rosebud with Alec Lacco standing in the boat. Hugh Mitchell, the local plumber, father of Bill and John, and Robert Harding, a house removalist who owned the boat transporter, are standing on the jetty too.

John Mitchell, now in 2021 in his mid 80s and putting his long life down to ‘never having smoked or drunk in my life,’ tells of two handed fishing for ‘couta with his brother Bill while wearing thigh boots and using rods with no barbs on the hooks.

Catching ‘coutas requires big hands, and I was only 5 foot 8 inches with small ones.

He tells of the fishermen from Queenscliff, on the opposite side of Port Phillip, hugging the shore coming out of the creek until they reached Barwon Heads, before heading out into Bass Strait where they fished for ’couta. Also, in springtime, many of them went to San Remo, a fishing town in southern Victoria in the Gippsland area, as the adverse wind and tide effect at that time made coming out of the Queenscliff Creek difficult.

Custodian: Local Dentist; 1956 – Unknown
In 1956, Bill and John moved to Newhaven on Phillip Island which is close to San Remo and Bill sold Anne to the local dentist. Tragically, the 14 year old son of the dentist drowned while checking the bilge pumps of locally moored boats. His thigh boots were considered to have been a contributing factor in his death. Vale son.

The brothers continued to fish for ‘couta and then went on to build their own cray boats.

Custodian: Mick Parkinson; Unknown – Early 2000s
Anne was eventually bought by Mick Parkinson, renamed Cygnet and fitted with a little single cylinder Yanmar GM10 engine. Mick was the son of Des and Margaret who together with Mick’s grandparents Archie and Stella, sold fish they caught in Port Phillip from their family business ‘Parkinson Fish’ in Blairgowrie, located at the southern end of Port Phillip.

Mick and his dogs were a very familiar local sight, cruising up and down in Cygnet. However, she was noticed in 2000, looking sad and neglected on a trailer on a back street in Blairgowrie. After some detective work, it was established she belonged to Mick and an approach was made by John McNamara to buy her. He refused the offer at first but John left contact details. Several years later he received a call from Darlene, Mick’s partner, saying that Mick was now ready to part with his boat.

Custodian: John McNamara; Early 2000s – Present
John bought her and renamed her Gina, as he says:

Her shapely lines are reminiscent of the movie star Gina Lollobrigida.

For several years she was on a swing mooring in Camerons Bight, Blairgowrie and John and his family did the annual work on her. This often involved bringing her into the shallows at Camerons Bight so she could take up and setting the alarm throughout the night to check that she hadn’t sunk on the incoming tide.

Eventually, common sense prevailed. Byron Miller a local wooden boatbuilder was engaged and she underwent a complete restoration, beginning in March 2005 and finalised in September of the same year. The work was conducted underneath the old Mitre 10 building in the main street of Sorrento.

During the rebuild, the boat was completely refastened and broken ribs in the stern were replaced. New floor timbers, floor bearers, gunwales and deck beams were installed. A new Oroko floor and deck were laid. The Yanmar GM10 engine was rebuilt and the boat was rewired. All original caulking was removed and replaced and the boat was completely stripped back to bare timber and repainted inside and out. Gina was relaunched at the end of September 2005 and moved to her current swing mooring at the Sorrento Sailing Couta Boat Club (SSCBC).

For the last 15 years, the McNamara family, children, grandchildren and now great grandchildren have made very good use of her, particularly during the summer. John recalls:

A favourite challenge was to encourage the kids to jump from the Portsea pier before it became too dangerous to do so, and swim out to Gina on a promise of watermelon. She is perfect for a family trip to Pope’s Eye or Mud Island, (which are favourite spots in the southern waters of Port Phillip) and a fishing trip to the South Channel Pile using our homemade scoop, fondly named Jaws, to gather a feed of mussels for the barbeque. We look forward to engendering a love of the sea and boating in all its forms in the next generation of our family.