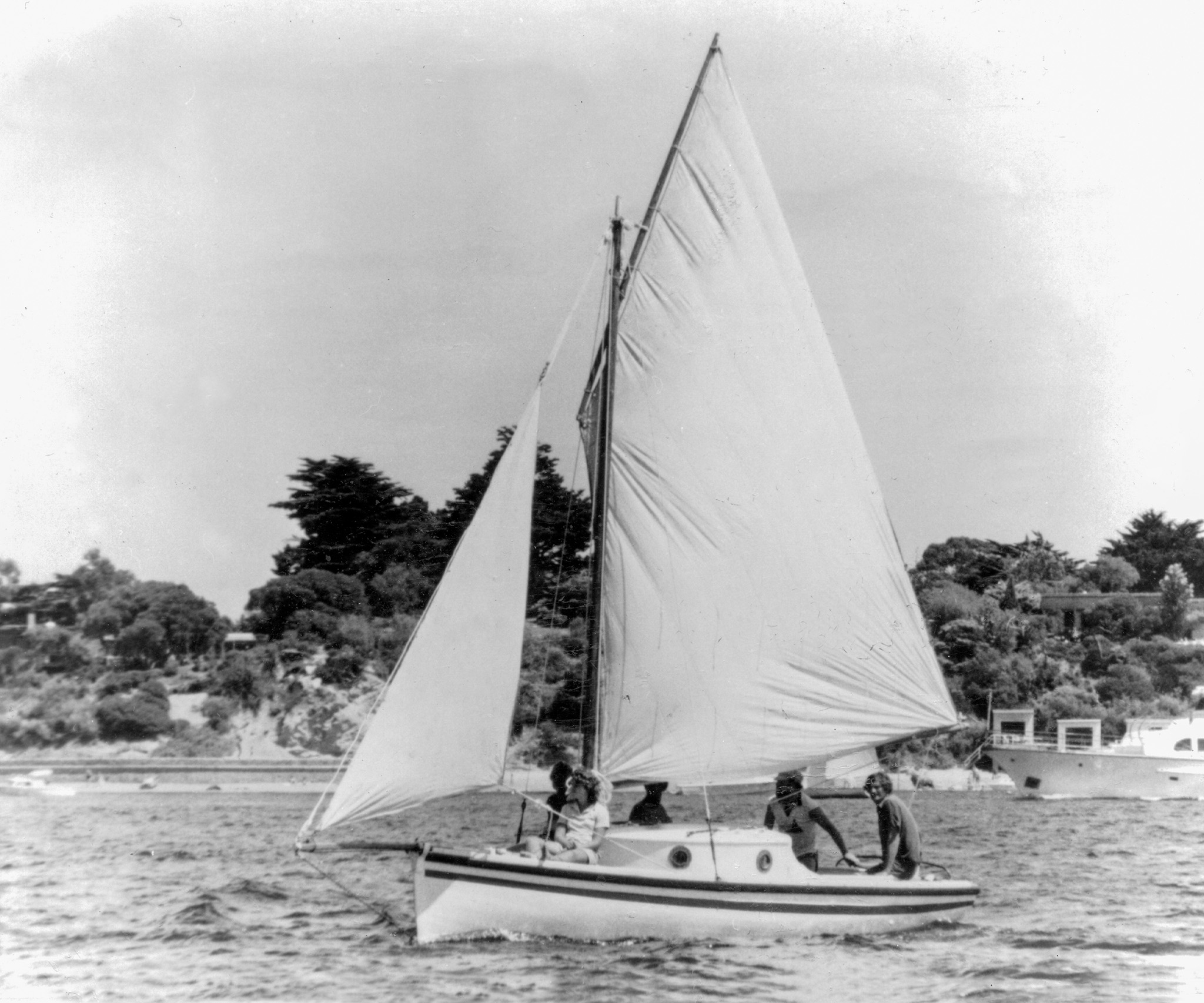 Custodian: Earnie Ricker; 1937 – Unknown
Peter Locke launched the newly built 20 foot boat Viking, now named Gallo Nero, on 5th September, 1937. She was built immediately after Lila which was launched two months earlier. For a brief time, Earnie Ricker owned her, but not long after her build she was sold to fishing enthusiast Alan Brockoff who moored her in front of his home at Portsea, Victoria.

Custodian: Alan Brockoff; c1940s – c1970s
One of Alan’s favourite fishing grounds was the water known as Rough Up, near Port Phillip Heads where, over the years, he caught tonnes of snapper from his Couta Boat, Viking. Alan’s son Michael Brockoff recalls Viking’s fastest trip back from the Rough Up waters, once when Michael had set the cliff on fire in front of the Brockoff home.

Alan saw the smoke from his boat and literally flew as she returned to her mooring.

Michael also recalls that Viking had a notoriously poor motor and that his father broke a thumb pull-starting her one day.

Due to its poor condition, Viking would often fail to restart after a day’s fishing and had to be pushed away from [navigation] lights and other boats with a mop! She was prone to some mishaps, including when Peter Brockoff broke her jibboom at the South Channel Fort, in southern Port Phillip.

The boat was well-used and much loved by the family. One report is that they owned one of the first pairs of water skis in Victoria; these nine foot long planks were made by Lillywhites in London around 1920 and given to Alan by Constance Jepp. Viking easily towed the skiers from the pier out into the open water.

Custodian: Larry Watkins; c1970s
After 30 years of providing pleasure to the Brockoff family, Viking passed into the hands of Larry Watkins, another devotee of the Rough Up snapper runs. So serious was Larry about his fishing that he had a fish cleaning room constructed behind his Portsea home.

Custodian: Harry Farnsworth; c1970s
Viking was then purchased by Harry Farnsworth who built the Sorrento Aquarium and operated the local ferry service with his brother. She was later sold to Al Long, but there is little detail about how Viking was utilised by her respective owners.

Custodian: Ken Bunny; 1980 – Present
She was sold to Ken Bunny in 1980. Through a chance meet up, Al informed him that he had an old fishing boat in his backyard which he was prepared to sell. A deal was struck on the spot.

At the time of purchase, Viking was in quite poor condition: She was painted a shocking brown with a painted rough cast deck and had been fitted with an ungainly rail around the bow. Ken assigned local fishing identity Ted McKinnon to take care of her maintenance and to help to restore her to mint condition. A centre-plate case and centre-board were fitted, the deck was stripped to reveal the original NZ Kauri timber and a set of old canvas sails were recut and fitted.

After her refit, Viking was used by Ken for racing in the local Couta Boat fleet and for pleasure sailing. Viking was aptly renamed Gallo Nero, translated as the ‘Black Rooster’ to symbolise Ken’s connection with a favourite Italian beverage that he frequently consumed onboard the boat with his friends and which had legendary powers of victory and pride!

Around 2013, Gallo Nero took to the road and was re-berthed at C Blunt Boatbuilder in Williamstown, after Ken asked his son Sam, who lives in the vicinity, to manage the boat. Nowadays, Gallo Nero passes the time crossing the channel from Williamstown to Kerferd Road, Middle Park on Port Phillip where the crew drop anchor for lunch, beer and a swim.