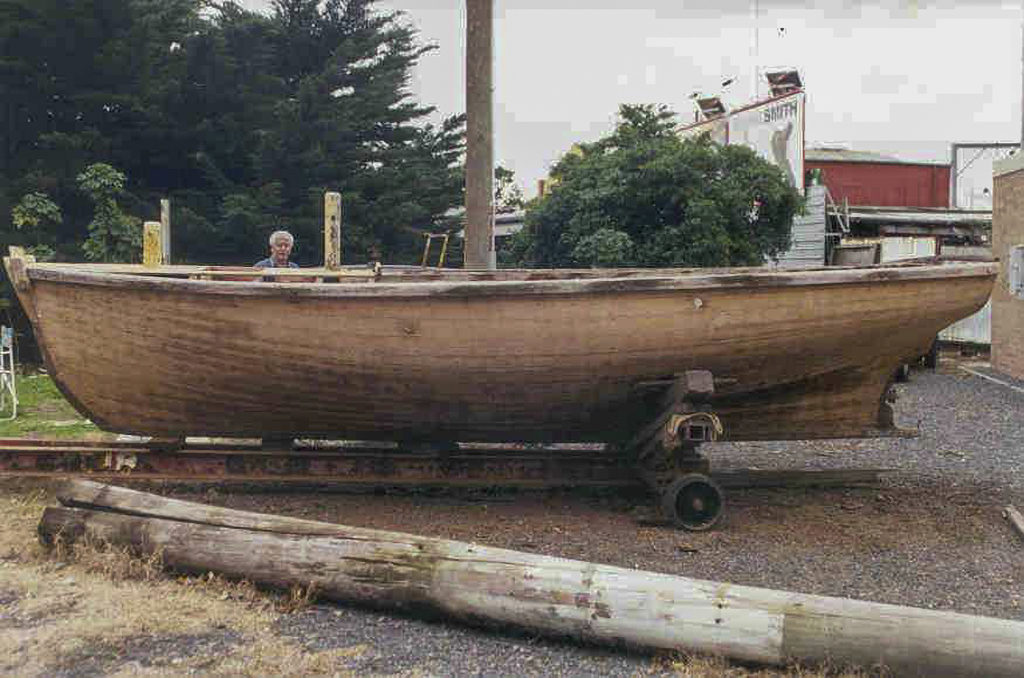 Early Years
The early history of Forever Young is not entirely known, but she is thought to have been built in the 1940s by Peter Locke of Queenscliff, using a Lacco design. She is 21 foot in length.

Custodians: Byron Douglas and Gavin Sharp; Unknown – Present
Forever Young was rescued by Byron Douglas and friend Gavin Sharp from the banks of the Mordialloc Creek Melbourne, in a state that real estate agents would describe as a ‘renovator’s delight’! Byron put in hundreds of hours to slowly but surely restore the old girl back to the grand lady she is today.

When found, she still had lifting gear in the stern and in the keel and a stainless steel soleplate around a false keel, indicating that she worked out of the Lorne Pier on the south-west Victorian coastline. The smaller Couta Boats were lifted in and out of the water by a crane that was stationed on the Lorne Pier. It is believed she also operated as a commercial fishing vessel out of nearby Apollo Bay.

When Byron found the boat of his dreams, she was not a pretty sight. The rumour amongst the boaties around the Mordialloc Creek was that she had sunk at one stage and the previous owners had stripped her in readiness for a restoration project that never got off the ground.

Byron had to learn how to steam timbers, make the tools to rivet the timbers, scrounge suitable timbers, caulk the boat and design the rig according to the strict Couta Boat Association racing rules. The new centre-board case alone took about 100 hours to fit and the timbers weighing 100 kilos and were moved in and out of the boat six times to fit!

Forever Young’s name is a tribute to the many hours of listening to music as she was restored and Bob Dylan was on the playlist quite often. It seemed such a perfect name in the end.

The restoration took 12 years in Byron’s driveway in Aspendale, in south-east Melbourne. In traditional terms she is a carvel hull boat with her hull timbers being New Zealand Kauri. The deck is Queensland Beech with the gunwales of recycled Merbau. She is gaff rigged with her spars being recycled Oregon goal posts that a local Council was throwing out for firewood. Her deck is new but most of the hull planking is original.

She has been fitted with a 10 hp Simplex petrol engine. They were built and sold by Hardman & Hall in Sydney but were very much 1950s technology. At least Byron fitted an electronic start to his engine!

Forever Young now spends much time being sailed and raced with the Mordialloc Motor Yacht Club (MMYC) fleet and is the focus of many cameras as she regally sails past the Mordialloc Pier and along the coast line.

No other sailing vessel is quite able to capture the imagination and turn back the time to when fisherman plied their trade using the wind as their sole source of transport. To see a Couta Boat under sail is somehow special and creates an atmosphere of peace and tranquillity. Modern yachts will never emulate this quality and we are fortunate at MMYC to have amongst us, three other jibboom boats, two of which are Couta Boats with their own story to tell at another time.