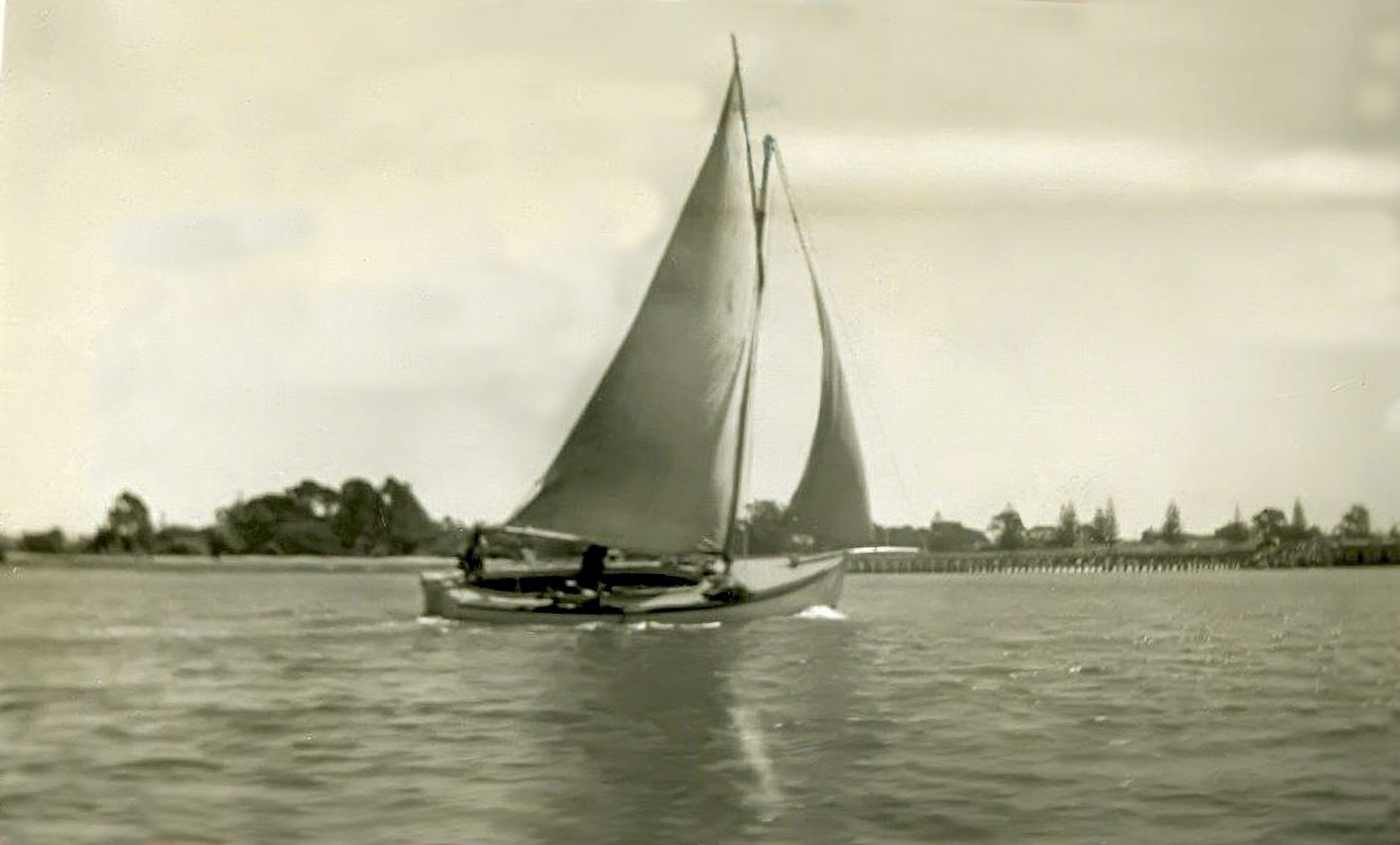 Custodian: Cyril Dusting; 1938 – 1961
Lost at Sea:
The history of Eileen II is intricately linked with her namesake predecessor Eileen I, a Couta Boat which was wrecked at sea in 1945. In turn, this couta fishing vessel had been built to replace another Couta Boat which sunk in 1938. All three boats were owned by Cyril Dusting, a fisherman from Portland, on the south-west coast of Victoria. An article in a local Portland newspaper reported that a fishing boat was lost in a collision:

About two miles off the bay, an unfortunate collision occurred between two boats when a boat owned by Mr. Sealey rammed that operated by Mr Cyril Dusting…Mr Dusting, owner of the sunken boat was fishing in another boat at the time and had handed over his own boat for his brother’s use that day. (The Portland Guardian, May 12, 1938).

As fishing was his livelihood, Cyril Dusting had a replacement vessel built and also named her Eileen. He continued to fish out of Eileen in the local waters off Portland until 1945 when, again, misfortune occurred. Eileen was wrecked after having been taken from her mooring by two men who were visiting from interstate. Their intention was to take her for a sail as far as Beachport, South Australia, a distance of approximately of 100 nautical miles. However, plans were foiled when their calculations went astray and the boat landed on the rocks at Lady Bay. The thieves were eventually arrested and incarcerated for their crime. One of the thieves had stated in court:

We were just going for a cruise. We got the boat away from the pier but were unable to start the engine, we were forced to abandon the boat. We took the boat, but got caught in a current, and had to dump it, where it was smashed up on the rocks. (The Portland Guardian, June 25, 1945)

According to the court report, Cyril Dusting had managed to recover the engine, sails, one strong line and the mast, but the hull was smashed. The incident inflicted much hardship and loss on Cyril and his family.

Shortly after the mishap, the local Fishermen’s Union launched an appeal to raise funds for a replacement vessel to be built for the owner. And so the current Eileen was built by Peter Locke in Queenscliff who quoted £300 pounds for the build. At the time, Peter had a Government contract to build boats for the War effort so Eileen was built out of leftover timber from these contractual arrangements. She was built to a length of 27’.

Like her two predecessors, Eileen was utilized as a fishing craft by the Dusting family. A news account reported:

Another of our fishing boats has gone over to Beachport, South Australia, Cyril Dusting’s ‘Eileen’. But it is pleasing to know that Cyril is after another and is away at present looking out for one. (The Portland Guardian, Sep 6, 1951).

From this report it can be assumed that Eileen remained in Beachport and fished the waters there in the ensuing years.

Custodians: Stan Chambers’ Family; 1961 – 1990s
In about 1961 Eileen was sold to Stan Chambers from a fishing family at Beachport, SA. Stan changed her name to Irene. She remained in the Chambers family for some years. Stan’s son Eric became the third custodian. He then sold her on to his brother who became the fourth owner. Eric had fitted Eileen with a wet well when he owned her. Sometime in the early 1970s she was built up approximately 18 inches, decked in and a wheelhouse added.

Custodians: Jane and Mark Grimshaw; 1990s
Eileen remained in Beachport, SA until the early 1990s when she was sold to Jane and Mark Grimshaw. Jane used her to fish for crayfish for several years out of Port Fairy. Jane sold the boat in the late 1990s and Eileen returned to Portland, Victoria as a recreational boat.

Custodian: Peter Goode; 1990s – 2012
She was owned for a time by Peter Goode who used her for recreational, rather than for commercial fishing. However, like her namesake, Eileen faced some misfortune. In 2012, she broke her mooring in the Portland Marina and began to leak. And as her custodian had not paid his mooring fees, he was given notice by the local council to remove her from the marina by the following week.

Custodian: David Fredericks; 2012 – Present
A local builder, David Fredericks, happened to be aware of the owner’s predicament. The then custodian suggested to David that if he removed Eileen from the marina he could take custody of her. The deal was a slab of beer. But in reality the deal cost David more than one slab: David gave a slab of beer for the boat, another slab to have her towed over to Fisherman’s Wharf, two more slabs to have Eileen lifted out onto the trailer, and another slab to have her lifted off the trailer and transported to a shed at the back of his workshop. In all, a cost of five slabs of beer.

After more than nine years, Eileen remains in David’s workshop undergoing restoration. He is intent on taking her back to her original configuration. The original timber is still intact, with her planking built of New Zealand Kauri, her backbone of Western Australian Jarrah and her deck beams of Oregon. She has been fitted with some new ribs and a centre-case has been reinstated.

When the restoration is completed, David intends to use Eileen as a recreational vessel for sailing and fishing. She will be returned to the Portland marina.

Early this morning, when out fishing, and about two miles off in the bay, an unfortunate collision occurred between two of the fleet, when a boat owned by Mr. Sealey rammed that operated by Mr Cyril Dusting. Travelling at a fair speed, Sealey’s craft caught the other broadside on, inflicting such damage that she sank almost immediately.

The two men on board the stricken vessel Messrs Cecil Dusting and J Couchi had a very narrow escape from drowning, and just scrambled aboard the other boat in time. Mr. Cyril Dusting, the owner of the sunken boat, was fishing in another craft at the time and had handed over his own boat for his brother’s use for the day.

He will be a considerable loser by the occurrence.

At Portland Court on Wednesday, before Capt. D. W. Hislop and W. Cooke, J’s P., two interstate visitors Charles Edward Briggs and Allen Tonkin, were charged with;
(1) stealing a fishing boat, the property of Cyril. Walter Dusting, valued at £500, and
(2) breaking and entering a store of the Ports and Harbours Department, and stealing there from a 44-gallon drum of petrol and a 4-gallon tin of lubricating oil, valued at £8/10.

The accused agreed to have the cases heard together.

Cyril Walter Dusting deposed: I am a fisherman residing at 65 Bancroft Street, South Portland, and am the owner of a 26foot centre board fishing boat. It is kept moored on the lea side of the breakwater when not in use. On June 1st 1945, at about 6.30 pm I left it on the moorings, fastened with a chain and rope, as I generally do. About 6am the following morning I went to the break-water and found the boat missing. From something I was told, I went later to a spot on the coast about half a mile distant, where I found the boat high and dry on the rocks, with the main sail and jib hoisted…Since then I pulled the boat on to the beach and-found it a total wreck, beyond repair.

I value the boat and gear at £500. No one had any authority to take it from the moorings. I have never seen the accused before. I went to Queenscliff and got an estimate for a new boat. Mr. Locke said it would cost £300, with the parts I have, but he could not say definitely. He didn’t inspect the boat. The total price of the boat was £500, including sails and everything. I recovered the engine, sails and one strong line, and also saved the masts. All the hull was smashed up, and Mr. Locke said it would cost £300 to £350 to replace the damaged portion of the boat, with what gear I have.

First-constable Peak: I am attached to the mobile police section at Warrnambool. At about 9.30 pm on June 4th, I was on duty on the Princes Highway at Tyrendarra East, when I saw the accused Briggs. I arrested him and brought him to the Portland police station. I said: ‘On about the first day of this month, a fishing boat was stolen from the Portland pier and I believe you know something about it. The accused did not reply.

Senior Constable Lawlor then said to accused: ‘I think you should tell us the truth about the whole matter. Did you take the boat?’ The accused replied: ‘Yes, I took the boat though I did not mean to damage it.’

Senior Lawlor asked: ‘Was it your idea in taking the boat?’ and the accused answered: ‘I really don’t know why. We were just going for a cruise.’

Senior Lawlor said: ‘The store belonging to the Ports and Harbors Department was broken open at the same time. Do you know anything about that?’ The accused replied ‘Yes.’

Senior Lawlor then said: ‘I have the padlock here…you apparently knocked the pin out… opened the door of the store, and took a 44-gallon drum full of petrol and a 4 gallon tin of oil and loaded it on to the boat before you stole it.’

Accused replied: ‘Yes, that is right. We intended to use it in the engine of the boat.’

Senior Lawlor then asked: ‘Was it because you were unable to get the engine started that you left it?’ And the accused replied, ‘Yes. We got the boat away from the pier but were unable to start the engine, and we were forced to abandon the boat. The drum was not quite full and some of the oil had gone too.’

First-constable Rowe: ‘I am a constable stationed at Dennington. About 12.30am on 6th June, I was on patrol duty at Port Fairy, where I saw accused Tonkin and arrested him. He was in his bare feet, carrying his boots in one hand and a rabbit in the other. His clothes were all wet. I said to him, ‘We have been looking for you about the boat stolen and wrecked at Portland.’ He replied, ‘We took the boat, but got caught in a current, and had to dump it, where it was smashed up on the rocks.’

He was then taken to Warrnambool and interviewed by Detective Bateman He in my presence, made a signed statement…

Another of our fishing boats – has gone over to Beachport, S.A., Cyril Dusting’s Eileen. But it is pleasing to know that Cyril is after another and is away at present looking out for one. The Eileen was taken over by C W and C Dusting, and E Jennings, who left here at 9 p.m. and were in Beachport next afternoon and home again by car that night.