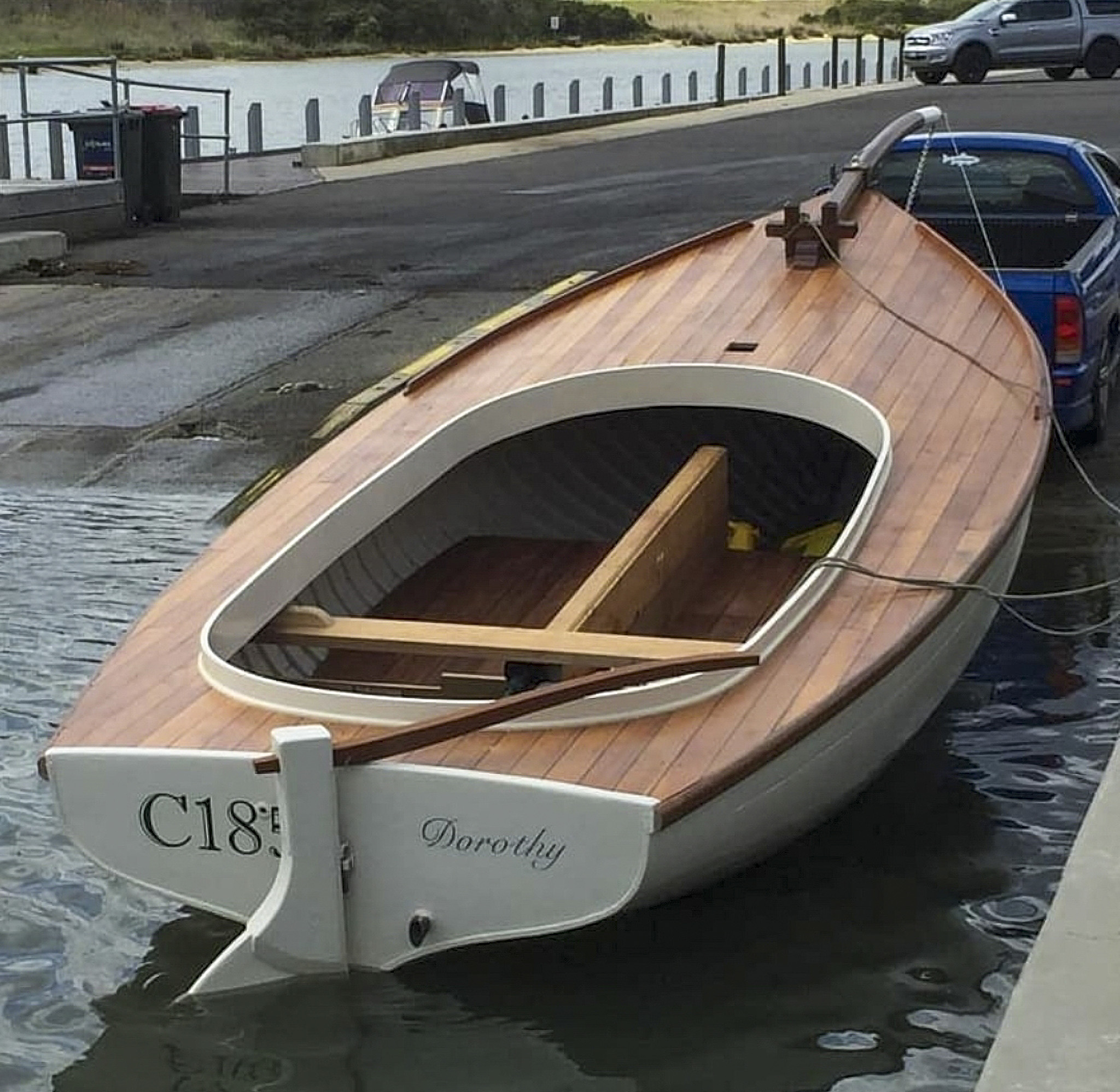 Early Years
Dorothy C185 was originally built as a cabin cruiser by Alec Lacco in 1952. She is 21 foot 6 inches in length.

Custodians: Elsie and Ken Harris; 1960s – 2013
The early history of Dorothy cannot be traced. When Matt Imlach acquired her in 2013 she was owned by Elsie Harris, the widow of her previous owner Ken Harris.

It is believed that sometime in the 1960s the boat had washed up on Hampton Beach in Melbourne, where Ken found her and helped the owner at the time repair her and return her to the water. Ken would later take custodianship of the boat and keep her on a swing mooring at Hampton, a sea-side suburb of Melbourne.

Custodian: Matt Imlach; 2013 – Present
The current custodian, Matt Imlach, grew up in the Melbourne bayside suburbs of Sandringham and Hampton, and spent a lot of time in and around the water with his family, particularly his grandfather, Basil Mennie.

Matt would often go out with Basil in his small carvel planked row boat to fish for whiting with hand lines off Hampton Beach in Port Phillip, using mussels from the Hampton moorings for bait because Basil firmly believed the whiting preferred the mussels from the area. Basil is a legend of Sandringham. Some of his stories have been recorded in the 2011 documentary about the foreshore surrounding the Hampton pier, ‘Shore Stories: Tales of a Kiosk’. When Basil died in 2007, Matt and Joe Battista began the restoration of Basil’s dinghy and a short time later it was returned to Hampton Pier where she had resided for decades before, and then was renamed Basil. Vale Basil.

After Matt came into possession of Ken Harris’ boat in 2013, he named her Dorothy in memory of his grandmother, Basil’s beloved wife.

The boat at that stage had been out of the water for some years, and the deck, cabin and deck beams had all deteriorated beyond repair. In addition, the Perkins 4-108 diesel engine had seized. However, the planking, gunwales and most of the ribs were in quite good condition, so at that point the decision was made to turn ‘Dot’ into a traditional gaff rigged, open hull Couta Boat.

The restoration began as a backyard project in Mentone then it moved to a factory in Braeside and was completed in Matt’s workshop in Carrum Downs, a Melbourne suburb. New Cedrata deck beams were installed with an extra 2 inches of height, as recommended by Tim Phillips of the Wooden Boat Shop, Sorrento and a new Celery Top Pine deck was laid on top. A seven foot by one inch slot was cut into the keel with a chainsaw for installation of a centre-plate case and a new centre-plate was laser cut in mild steel.

Dorothy was given a new mast, boom and gaff made out of Oregon that had been sourced from old roof beams, from a demolished house in Hawthorn, Melbourne. The jibboom was made out of Makore with a Celery Top lamination through the middle to create a unique racing stripe. Matt made Balsa Wood models of all the bronze fittings, including the stem fitting and jib cars, and sent them to Bill Perrins’ foundry in Cheltenham, Melbourne for casting.

Matt wanted a set of blocks that were unique to ‘Dot’, so he made a set out of Celery Top Pine and Iroko, with Ronstan ball bearing sheaves. New sails were made by Warren at South Eastern Sails in Seaford, Melbourne.

Dorothy was finally launched from Mordialloc in January 2020. And after a successful shakedown run up to Sandringham, she now sits on her swing mooring at Hampton where, hopefully, she will provide some great memories of fishing and sailing for the next generation.