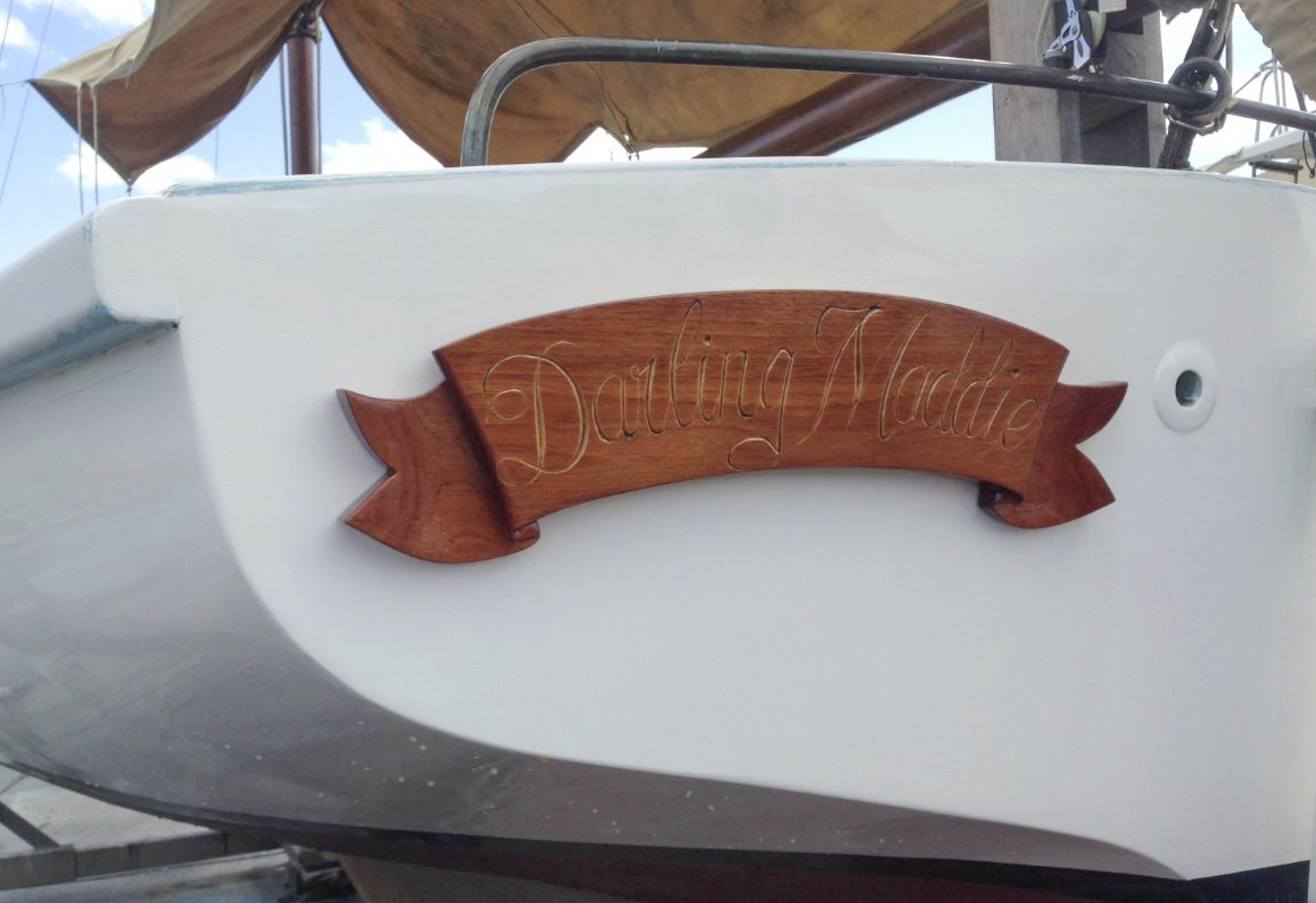 Custodian: Clive Beckingsale; 1982 – 2007
Originally named Victory, Darling Maddie was built in 1982 by Clive Beckingsale in Sorrento, Victoria at a time when there was a revival in the design of the traditional Queenscliff Couta Boat, which was being built for regular competition sailing. Victory was the third modern-day Couta Boat to be built, preceded by Hero (the first) and Minerva (the second), all originating from a Ken Lacco design.

In the previous year, Clive had helped Tim Phillips restore Royal. And in exchange for his assistance, Tim granted Clive the use of Royal for that summer. The experience inspired Clive to build his own Couta Boat. He commenced building Victory in late January and took a couple of months off work to plank her. Will Baillieu, the owner and builder of Hero and Ajax, assisted Clive with the planking. A variety of timbers were used in the build: the hull was of clear Oregon, the ribs of Silver Ash, the deck of Celery Top Pine, while the keel, stem and stern post, transom and plate case were of Yellow Stringy Bark from a timber mill in Orbost, in Victoria’s high country.

Clive built the boat in in his backyard and not having factored in her width in relation to the driveway, on her completion he had to hire a huge crane to lift her over the roof of his house.

Once launched, Victory sailed in the early fleet of the Couta Boats and became a regular competitor, sailing with mixed success. She won the Petersville Series conducted out of the Blairgowrie Yacht Squadron and, in competing in the Old Gaffers Division, beat the fleet home against 45 to 50 foot Sydney to Hobart yachts. This was an impressive performance, but winning the Portsea Cup always eluded Victory and Clive.

Custodian: Michael Lempriere; 2007
After over 20 years of regular and successful sailing in the Couta Boat fleet, Clive sold Victory to Michael Lempriere who, regrettably, was killed in a car accident about a month after her  purchase. In the following year, Victory went to a new custodian in Queensland. Vale Michael.

Custodian: Euan MacDonald; 2008 – 2010
In 2008, the Wooden Boat Shop in Sorrento brokered a deal for Brisbane-based Euan MacDonald who was involved in marine sales. Immediately, Euan decided on a name change and Victory became Wee Jessie, named after his granddaughter.

Euan purchased Wee Jessie, in part to entertain potential clients and to do some regular competition sailing on Moreton Bay, South East Queensland. To enhance her on-water performance, he attached a ‘Code 0’ headsail which, in the lighter breeze, gave her some edge over her competitors. But after a short period of two years, Euan sold her to purchase a bigger boat.

Custodian: George Springhall; 2010 – Present
Another Queenslander, George Springhall from the coastal town of Tin Can Bay on the Sunshine Coast, about 200 kilometres north of Brisbane, became the new custodian of Wee Jessie in 2010.

In his youth, George had sailed a Wright Intermediate Dinghy on the Brisbane River, where he became adept in sailing in tidal flows and lots of mud. His interest in timber boats was roused by the story of the restoration of the Coronet, a wooden-hull schooner yacht built in 1885 and which, in recent years, underwent an extensive restoration at The International Yacht Restoration School in Newport, Rhode Island, USA. So he decided to look for a wooden boat to purchase.

George found Wee Jessie sitting on her mooring at Manly on Moreton Bay in Queensland and was intrigued by her shape, particularly her transom. George looked no further; he bought the boat and renamed her Darling Maddie after his first granddaughter.

Soon after the purchase, George, with the assistance of a few experienced yachties, sailed Darling Maddie from her mooring on the Brisbane River to Tin Can Bay, completing the trip over two days and more than 12 hours of sailing.

Sailing a Couta Boat in the open sea can be fraught with danger, yet Darling Maddie and her crew handled the conditions well. George did have one anxious moment on the first day.

The jib-halyard peak that was lying on the deck was let go and rode up the mast; one crew had to climb the mast in a rolling sea to ride the halyard back down again.

The next day was smooth sailing from Mooloolaba to Tin Can Bay.

In the 10 years in which George has owned Darling Maddie, he has undertaken regular maintenance. In a recent renovation he replaced the deck with White Beech, removed from his family’s 100yr old home verandahs.

Since owning Darling Maddie, George has not had a lot of recreational time to sail her. However, with the relocation of his daughter’s family to the region, George has a new incentive to take his grandchildren sailing and fishing. His plan is to set Darling Maddie up for regular trips up the inside passage to nearby Fraser Island.