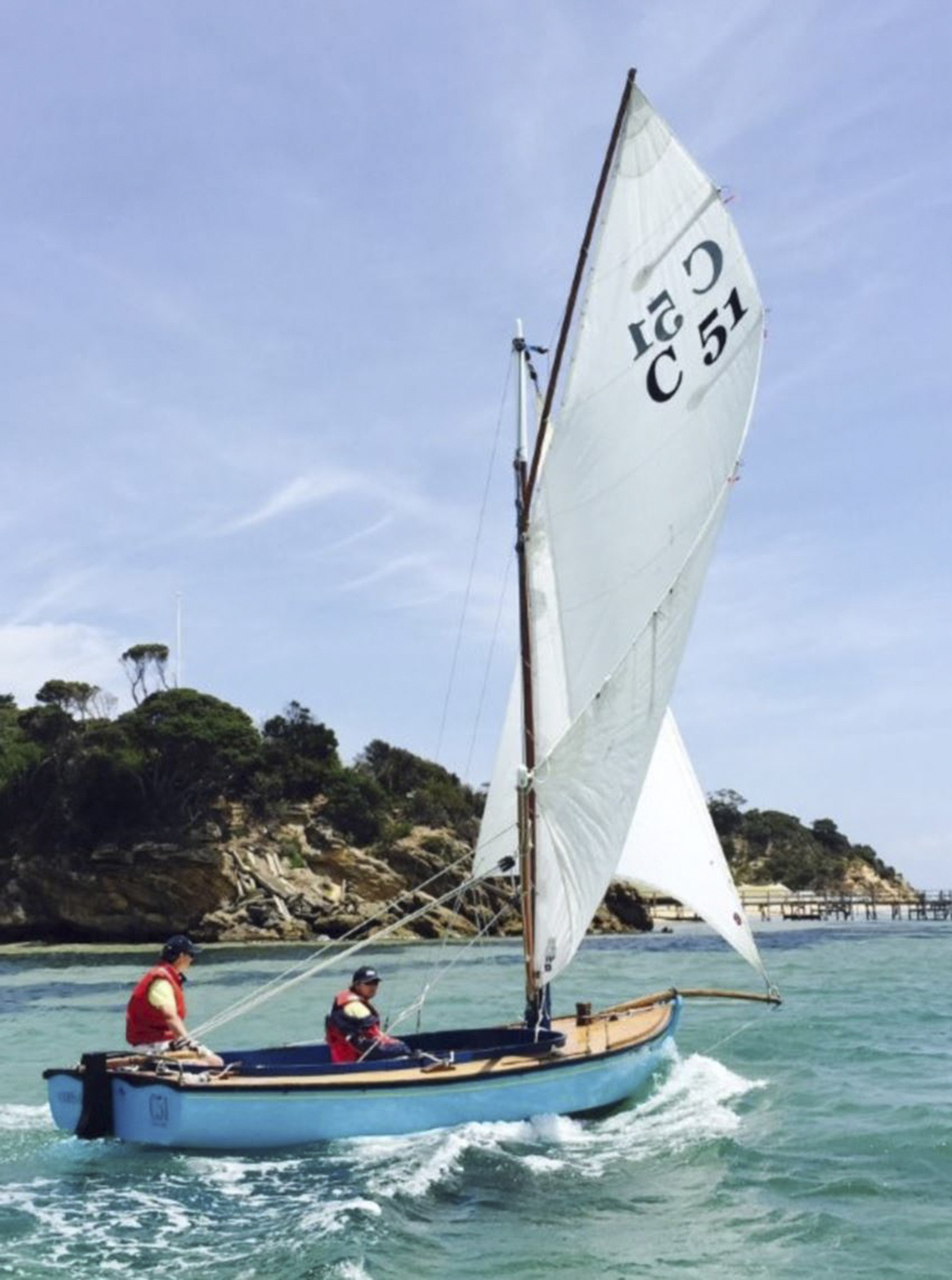 Early Years
Corsair was built by Alec Lacco in Rosebud, Victoria about 1951. She was one of the 20 footers that were produced at the time; her length is 20 feet 3 ½ inches. The planking is of Island Kauri, the ribs are of Celery Top Pine, while the deck is of Queensland Beech.

Custodians: The Ross Family; Early 1980s – Early 1990s
In the early 1980s, Corsair was purchased by the Ross family. At the time of the purchase she was just a basic hull and deck with a Volvo engine, located on a mooring at Williamstown at the top end of Port Phillip.

She was hauled out and set up in Charlie Strong’s driveway at his home in Port Melbourne. John, his brother Alan and their late father Bernie were quite involved in the fit-out process, which comprised installing a centre-plate case, thwart and other necessary additions. The boat was then moved to Sandringham Yacht Club for final painting and the bending-on of sails made by Col Anderson.

Corsair was then sailed to her mooring located at Point Macarthur, Portsea at the southern end of Port Phillip.

For John and Alan, access to the mooring was a walk down to and along Shelley Beach, to a shallow shelter in the cliff face where they kept a dinghy. John recalls that during one really bad winter storm Corsair was swamped at her mooring and sank. The next day, with help from Tim Phillips of the Wooden Boat Shop and others, her rescuers managed to pull her up on the beach and bail out most of the water, then tow her around to the Sorrento Boat Ramp and transport her up to Tim Phillips’ shed for repairs.

After this experience, Corsair was relocated to a mooring close to the Sorrento Pier. John and Alan, founding members of the Couta Boat Club, sailed her in the growing Couta Boat fleet out of Sorrento, enjoying some good race results, particularly in the early Petersville Series events.

Custodian: David Scott; Early 1990s – 2003
10 or so years later, John Ross sold Corsair to David Scott from St Kilda, Melbourne. David was an Able Seaman in the Royal Australian Navy, so his life was intricately connected to the sea. By the way, in 1944 as a young 17 year old, David was on the bridge of the HMAS Arunta during the Battle of Surigao Strait in the Philippines. In the time that he owned the boat, David was also deployed to East Timor. No doubt, Corsair provided a safe haven for this war veteran as he sailed the trouble-free waters of Port Phillip.

Corsair was in David Scott’s possession until 2003 when Queenscliff Couta Boat sailor Courtney Dalton came upon her. However, by this stage she was in a sad state and needed repairs.

By 2006, Courtney was ready to embark on his long term plan to build a Couta Boat. So Corsair was sold. Ash Summerfield of Sorrento took over the custody of Corsair and moored her off the jetty at the SSCBC.

Custodian: Ash Summerfield; 2006 – 2021
Since taking possession, Ash spent many hours either racing or cruising around the southern end of Port Phillip with his family and friends. In addition, another favourite pastime for Ash was to fish from Corsair, even though he declares that he is not a good fisherman. At that time Corsair’s deck attracted an aquatic creature of a different kind – she provided a perfect resting place for a Port Phillip seal to jump on board and bask in the sun. This image was captured on camera by another fisherman and it was eventually forwarded to Ash. Ash claimed that Corsair’s newfound aquatic friend would have made a good for’ard hand in flexing her muscle and keeping the rest of the crew at bay!

Since Ash’s recent retirement, Corsair could be seen doing a weekly cruise along the coast from Portsea to Blairgowrie. And from time to time Ash dreamt of navigating Port Phillip on Corsair, tracing the journey of Matthew Flinders but perhaps without the taxing climb of The You Yangs and Arthurs Seat. However, his dream will not be realised.

In the 2020 winter off-season, Corsair made her final visit to the Wooden Boat Shop at Sorrento for her annual maintenance. In early 2021 she was sold and transported to Brisbane, Queensland.