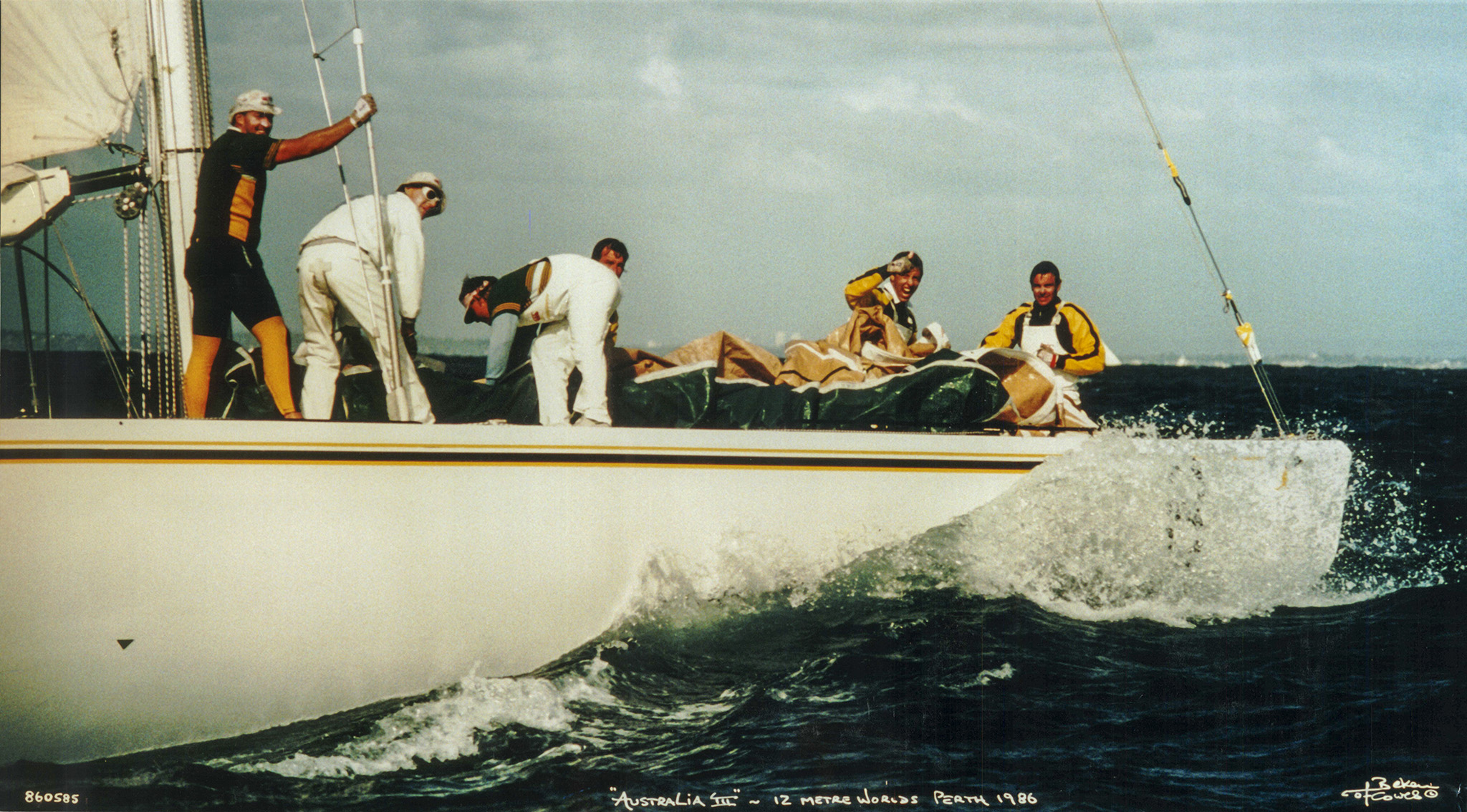 Early Years
Cooma was designed and built by brothers Noel and Ted Higgs of Higgs Brothers, Geelong, in the Western Beach yard on Harbour Trust land, circa 1935. The Higgs’ original plaque is still evident on the boat.

Custodian: Charles Jurgen; 1935 – Unknown
Charles Jurgen, a professional fisherman who operated his vessels out of the Victorian fishing ports of Queenscliff and Lorne, was her first owner. All the Jurgen-owned vessels were named Cooma, which was derived from an Aboriginal term ‘coombag’ meaning big lake.

Custodian: Andrew Cannon; 1978 – Present
In the late 1970s, there were very few operational Couta Boats on Port Phillip. Cooma, at that time, had been renamed the Blue Speck and had a hard life fishing but was largely intact. The jibboom had been shortened, as her previous owner preferred to motor rather than sail, though all the rigging was original.

The Purchase:
Marcus Burke, since deceased and the first President of the Couta Boat Club (CBC), sat with Andrew on the rock outcrop overlooking the small harbour of St Kilda trying to picture what the vessel would look like restored.

After that sighting, Andrew committed to buying the Higgs boat for $2,200 but at the time he was short of funds. However, with good fortune the night before the transaction he was informed that he was to receive a $2,500 insurance compensation, as a result of a car accident. And the next day Andrew purchased the boat!

The Restoration:
Andrew arranged for well-known boatbuilder Harry Clark to assist him in the restoration of the boat. The work was undertaken in a hangar in Lorimer Street, Port Melbourne along with Dennis Wilkins who was restoring Rita. Andrew recalls that Harry was an exceptional shipwright who had worked briefly for the famous White family boat builders and was also forced to work under the Manpower Act for the Harbour Trust during World War II.

The boat was stripped back to the hull and re-built, with the final stage completed at the house of Tim Phillips’ mother in Portsea.

In addition to Harry Clark’s advice and assistance, Jack Norling, the famous cray fisherman, noted for having a world record catch, made the spars from Oregon and a new rudder out of Huon Pine, using the original gudgeon pins.

Well-known sailmaker Col Anderson, who was not making Couta Boat sails back then as the preference was for Hooper Sails, made his first set of new Hood sails. The original canvas ones are still with the boat, as are the oars.

The new deck fittings were provided by Gordon Chatfield, who was the founder of Fico Yacht Fittings, previously Field Instrument Company, then to become part of Ronstan. Other fittings were cast at Briggs Marine using some of Harry Clark’s patterns.

Some Memorable Journeys:
Once rigged and finally floating, Andrew had a bungle with a bung…he forgot it! When launched, Will Baillieu darted-off and made one and Cooma was re-launched without further problems.

Cooma was then used for many trips up and down Port Phillip; some were legendary. On one particular trip, Andrew was accompanied by Dave Baillieu. This journey took 12 hours instead of the usual four to six hours, as they were sailing all the way into a southerly headwind and incoming tide. Dave’s wife, Claire, was about to call rescue services.

Other trips were shorter and more fun. On one trip undertaken with Chris Kiel, they were given a royal farewell by Commodore Hawes of Royal Melbourne Yacht Squadron. The vessel catered for a full crew; however, the only full crew were Chris and Andrew who feasted all the way to their destination. On this lengthy trip made against the tide and with very little clue about navigation, they lost their bearings. Andrew recollects:

Keily would point one way and I the other, we proceeded roughly in the middle and, bingo, hit our target smack on, the Sorrento Pier. As darkness fell, we were making way to my Lentell Avenue, Sorrento mooring. Accidents, I am told, often occur within sight of home.

I dropped Keily off at the jetty to get the dingy and I moored the vessel on its swing mooring. On moving forward, I tripped over the thwart with a heavy old torch in-hand. The torch went overboard and I fell into the sails in the forward well.

Kiely arrived seeing the torch heading to the dreaded ‘Davy Jones locker’ on the bottom of the bay. He thought I was still attached and Kiely waved goodbye and said, ‘Bye Carl’ (my nickname), as he correctly and quickly concluded to let me drown! We both laughed when I appeared from within the sails.

The engine in Cooma at the time of purchase was an air-cooled Petter made in Southampton, England, a subsidiary of Hawker Siddeley. Sail maker Col Anderson advised Andrew to ‘chuck it overboard’. For a good while before purchasing a Yanmar twin-cylinder, the boat was sailed without a motor, including in and out of the St Kilda Marina, which could be hazardous but a good way to hone one’s boat handling skills.

During the mid-1980s, Andrew was committed to professional sailing and rowing overseas, and in this period Jack Beazley from Queenscliff looked after Cooma. Jack was under the impression that it was for a month or two. Four years later when Andrew returned and found that the boat was in better condition than before his departure. From 3,500 kms away, Andrew still had his eye on her; he had spotted Cooma featured on TV in the ‘Blessing of the Fleet’ ceremony, with Jack at the helm off Queenscliff.

Bob Lachal was also a custodian of Cooma during another absence.

Cooma, having been built as a working vessel, is a big 20 footer and pointing to the wind with a gaff rig is not her speciality. However, she has been a very enjoyable boat to own and share with many friends, and also led to me enjoying sailing professionally in the defence of the America’s Cup, the Admiral’s Cup and the Congressional Cup.

She has been owned happily by me, one of the longest owners  in the Couta Boat fleet, being over 42 years which is testament to a loved boat.

Her Number:
Andrew Cannon says C56 was allocated in 1982.

As the first four sets of numbers were allocated to Committee members, number 56 was chosen. Number 56 Albany Road was our family house and is the year in which I was born. So I chose 56.