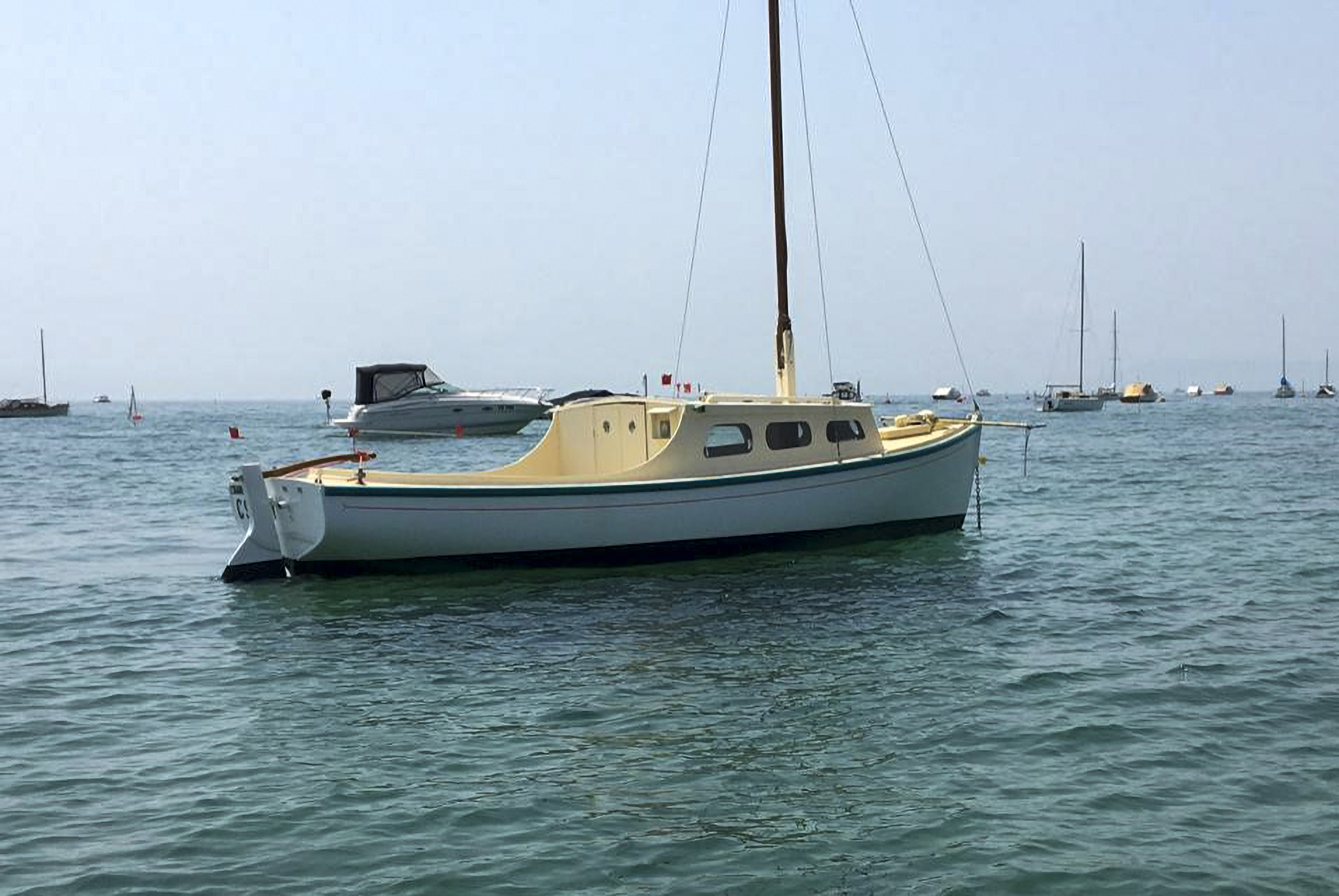 Early Years
Charlotte is a 24 foot Couta Boat built by the Alec Lacco at Rye, Victoria in the 1950s. Her early history is unknown until she was found by Barry Dawes and the Law family in December 1997 in the back streets of Sorrento, Victoria.

Custodians: David and Jos Law; 1998 – 2020
She was purchased in January 1998 from John Keys for David Law’s 50th birthday. John had been restoring her but had unfortunately fallen and damaged his hip, deciding to sell her to a new family that could get her back on the water. She was in need of repair, having been sitting under trees for some time in the driveway of John’s house. The cabin had come apart and the floor boards were rotten, but amazingly the BMW diesel started first go.

The boat was moved to Lennie Dodson’s shed for a major overhaul, with a new cabin and front deck installed. Once the wood work was completed, she was moved to the Law’s driveway and the family spent their weekends painting her. You could often find David sitting in the boat high and dry in the driveway, having a cuppa tea at the helm, contemplating life.

She was relaunched in 1999 with much fanfare, and was named Charlotte from Jos Law’s middle name. She became the family’s weekend adventure with trips to Queenscliff, Popes Eye and Mud Island at the southern end of Port Phillip. On busy summer days, David could often be found motoring out to the flats off Sorrento. The boat was also used as a support vessel for the Minnow fleet in the early days of the Couta Boats joining the Sorrento Sailing Club. She would follow behind the Minnow fleet keeping an eye out, offering words of encouragement to the stragglers and making sure all returned safely to shore.

Charlotte was lovingly maintained each winter. In 2015, her BMW diesel motor finally packed-up and was replaced with a modern Yanmar.

Great fishing expeditions occurred on Charlotte. Scallops, mussels, flathead and squid all caught within a day to make the best marinara pasta on the peninsula. You could always hear Charlotte coming, with, first, Oscar and then Sparky, the dogs barking furiously at any bird that dared to approach the boat.

The Jack Russells – Ned and Gus, protected the boat, although luckily for all fellow boaters, they are completely un-interested in birds. They are however completely obsessed with fishing and feel it is their duty to kill any fish that comes on board. This causes a rather chaotic scene as dogs attempt to assist in bringing fish on board and at times get a little over enthusiastic and fall overboard.

Charlotte was used by the Law family for fishing and cruising until late in 2020 when she was sold to the Lovett family.

Custodian: Lovett Family; 2020 – Present
The Lovett family comes from a long line of sailors from Norwegian heritage and have a passion for all water sports. After purchasing a beach shack they found Charlotte and their trips to the beach were now complete

Charlotte has already been used for fishing, having picnics and catching up with family and friends on their boats.

Having been refurbished throughout 2021, Charlotte will be relaunched soon, to be enjoyed by the family for years to come.

Charlotte is kept on a mooring at Sorrento.