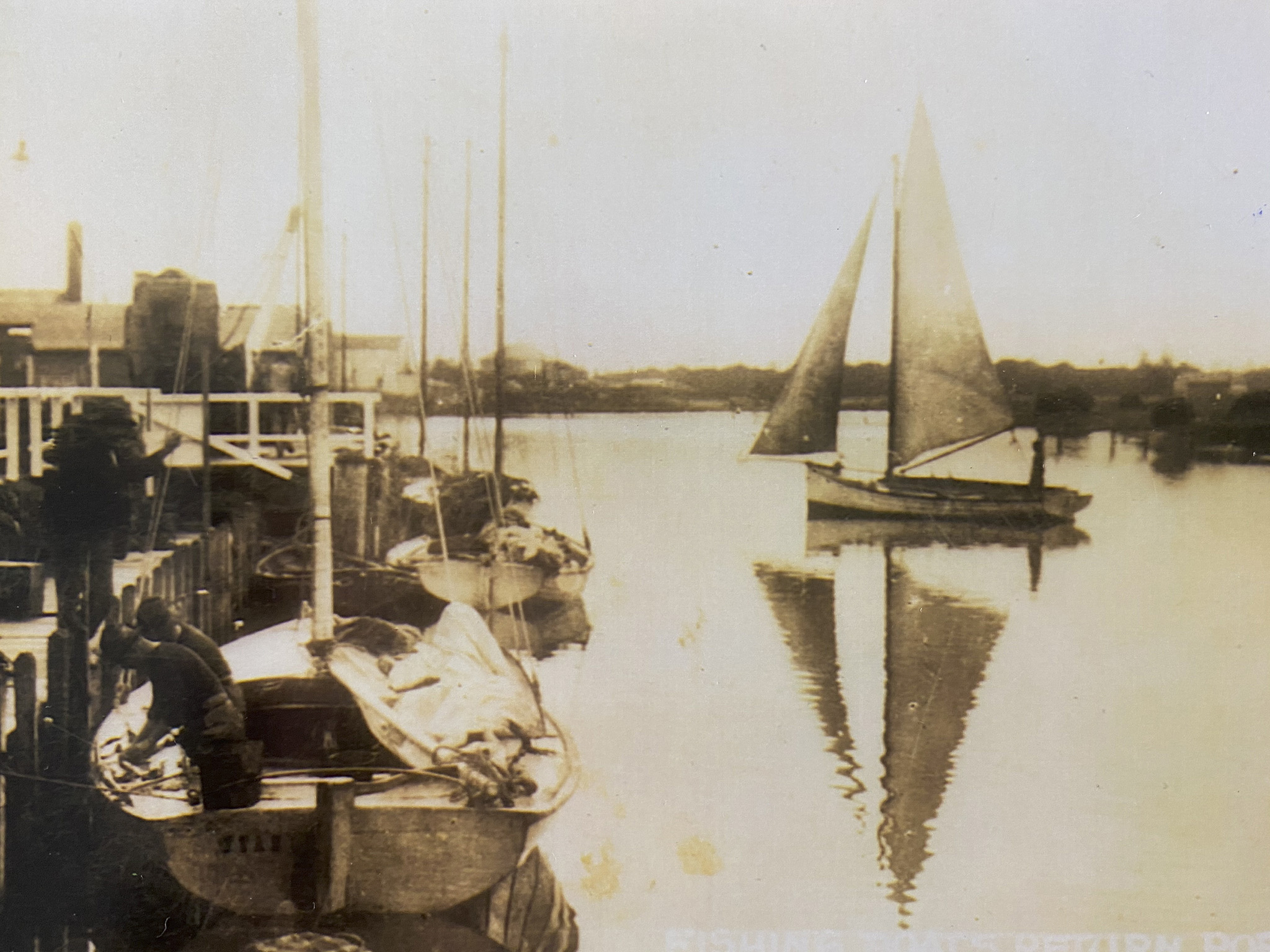 Custodian: Don McGillivray; Unknown date
Custodian: Dean Humphries; Unknown date
Dolphin spent a short stint at Lorne on the south-west coast of Victoria after being built and before being shipped to the larger port of Portland, where she remained as a working fishing boat up until 1983. Portland fisherman Don McGillivray was her custodian and, later, Dean Humphries.

Custodian: Shane Gibb; 1983
Les Gibb, who was the Port Fairy Harbour Master at the time, thought Dolphin was an excellent boat and encouraged his son Shane to buy her in 1983. Young Shane was keen to sail her from Portland to Port Fairy with a mate. A fresh north-westerly and a watchful Dad followed along the coast road keeping watch. Shane continued to use Dolphin as a recreational and fishing boat before selling her to Hector Varrenti from Dunkeld, Victoria.

Custodian: Hector Varrenti; 1980s – 1994
Hector Varrenti moored and sailed Dolphin at Port Fairy until 1994. The sail, a Dacron sail made by Hood Sails, was acquired around 1992.

Custodian: Julie McErlain; 1994 – 2005
In 1994, Dolphin was sold to Julie McErlain. Whilst the boat was still in good seagoing order, she was, however, in need of restoration. Julie set about replacing the rusty ballast of old railway sleepers, replaced the centre-plate and painted the vessel with heritage burgundy and cream colours. In 1995, Dolphin was freighted to Geelong.

The current mast was installed by legendary Port Fairy boatbuilder Garry Stewart around 1994 to 1995. In 1996, a Volvo 20 hp diesel marine engine was installed. In 1998, a new marine plywood deck was laid by Couta Boat specialist Keith Cayzer, although this was later replaced by a laid Iroko timber deck.

Gaining experience as an ocean racer, Julie next sailed Dolphin from Sandringham Yacht Club (SYC) in 1999.

In 2000, SYC held a most eventful ‘Shiver Me Timbers’ race for all classes of timber vessels.

There was not a breath of wind for the single leg race directly out to a channel marker and return. Sailing in light winds meant Dolphin was coming last. However, when the first yacht reached the turning mark, rules were abandoned, motors were on, and by quickly going about, Dolphin was now in the front position heading home. She finished in third place overall.

The warmer Melbourne climate didn’t help Dolphin’s topsides. Taking friends across the bay to Williamstown one day for a Sunday lunch was nearly disastrous, as water was splashing in slowly but too quickly for the bilge pump to cope. Fortunately, Julie was able to hail a Royal Brighton Yacht Club committee boat during their race day event. As the committee boat had to get back to complete its club duties, Dolphin was towed at breakneck speed back to SYC, which simply brought more water into the boat. By the time they returned to the yacht club, Dolphin was half way under.

In 2001, Julie McErlain brought Dolphin back to Port Fairy, where she remained.

Custodian: Ken Howell; 2005 – 2011
Julie sold Dolphin to Ken Howell in 2005. Ken Howell moored and sailed Dolphin at Port Fairy, Victoria until 2011 when he sold her to Mark Lisle and Donald McDonald.

Custodians: Mark Lisle and Donald McDonald; 2011 – Present
Donald already owned a small reproduction Couta Boat, Marie’s Spirit, which was moored at Port Fairy, but he wanted to buy the larger Dolphin. However, his wife Terry wasn’t keen on him spending more money on a second boat. So Donald connived to catch Mark at a vulnerable moment and somehow managed to convince him to become a partner in the boat.

In 2015, Mark and Donald commissioned the afore-mentioned legendary Port Fairy boatbuilder Garry Stewart to undertake a major restoration of Dolphin. The boat spent almost a year in Garry’s boatshed where he meticulously and expensively refastened the hull: he replaced approximately half the copper fastenings, repaired the ribs, removed and refitted the ceilings, repaired the deck beams, installed new knees, removed and refitted chaffing battens, laid a new Iroko timber deck, installed new steam-bent combings, recaulked and then painted the entire boat inside and out.

The boat was relaunched in May 2016 with new blue and white colours and a new name, Castwood. Why Castwood? Both Donald and Mark live in Melbourne but in 2002 they built adjoining holiday townhouses in Castwood Place, Port Fairy known as Castwood Villas. Hence, the name was Castwood for their beloved Couta Boat. However, Castwood’s mainsail then still carried the Dolphin emblem. Shortly after her re-launching, the owners changed Castwood’s registration from YX220 to C1939, being the boat’s Couta Boat Association number.

Within days of the boat being back in the water and still with that freshly painted smell, Donald decided to do a bit of trawling down the Moyne River with his wife, Terry. Whilst fighting over a tangled fishing line, the couple managed to crash poor Castwood into the river wall, snapping the tip off the jibboom. It would be months before Donald would admit this to Mark.

Donald McDonald and Mark Lisle and their families have a strong connection to Port Fairy and regard themselves as semi-locals. They go down to their houses in Port Fairy whenever they can and Castwood can be seen regularly cruising around the bay. Donald is the fisherman of the partnership, whereas Mark is more inclined towards a leisurely sail.

In January 2017, Mark married his beautiful wife, Deb on the lawn area in front of Johannsen’s Perch, adjacent to where Castwood is moored. They arrived at their wedding on Castwood on a perfect sunny Port Fairy afternoon with skipper McDonald at the helm.

Castwood is still moored proudly and prominently at Port Fairy’s famous wharf to this day. Lisle, an accountant by profession, calculates that he and McDonald are sitting on a substantial  unrealised capital loss. However, they believe this is a small price to pay for a lifestyle investment they hope will be passed on to the generations to come.