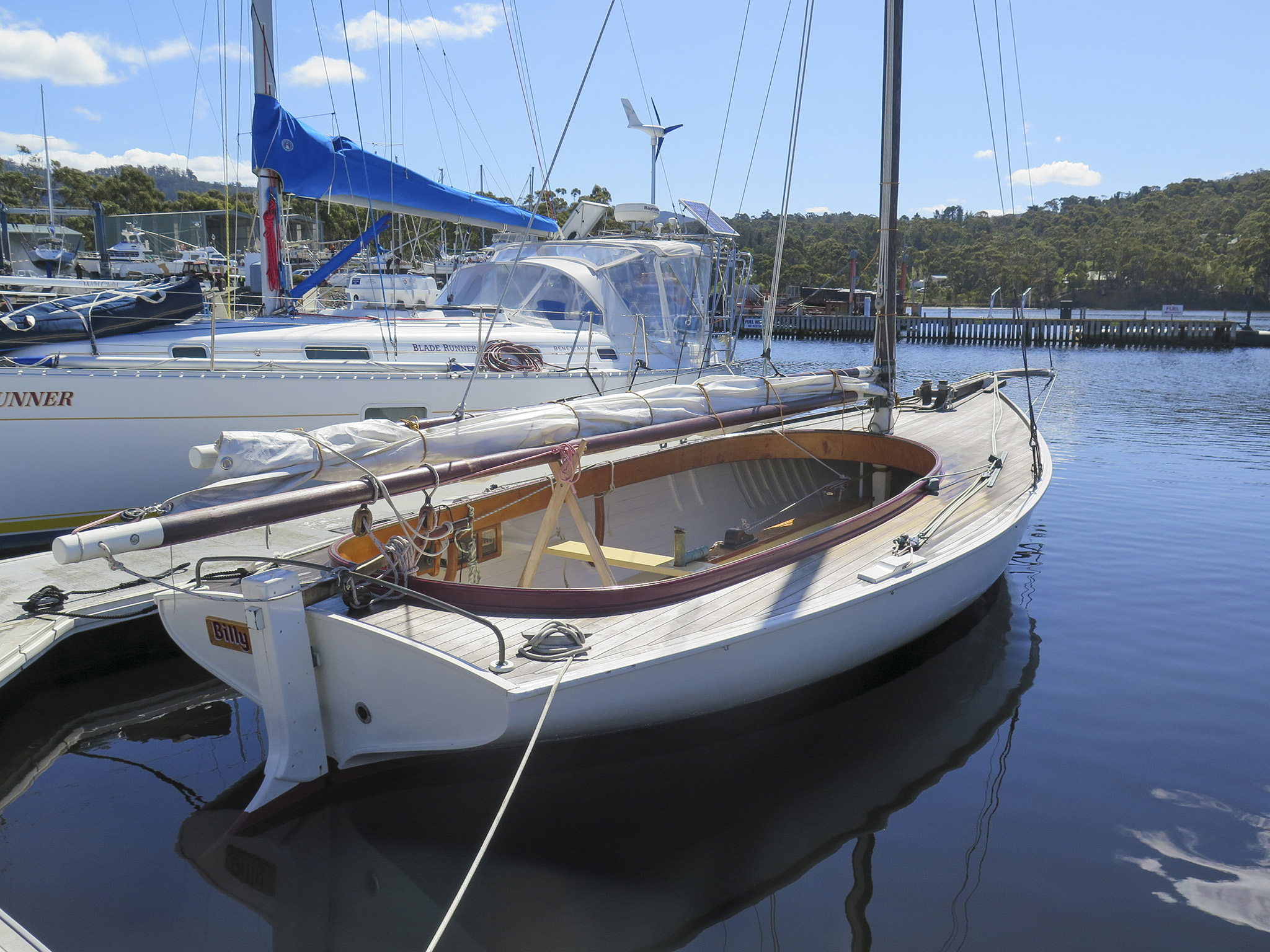 Custodian: Rod Stirling; 2000 – 2018
Tasmanian teacher and skilled craftsman Rod Stirling built Billy in his backyard in Bellerive, a riverside suburb on the eastern shore of the Derwent River in Hobart. She was built to the standard length of 26 foot 6 ½ inches to a set of plans purchased from the Wooden Boat Shop (WBS) in Sorrento, Victoria.

Every little task presented a challenge; it was a lovely hands and head exercise.

The build commenced in 2000 and was completed in 2009. Halfway through the process Rod chose to commit to part-time work in his professional life so he could devote more hours to the project.

Purposely, I took my time because I wanted to do a good build; I knew it was going to be the only boat I was going to build, so it was about being able to test myself.

In the years leading up to buying the plans, Rod attended the Wooden Boat Festival in Hobart where he saw Couta Boats and was attracted to the simplicity and beautiful lines of the craft. As well, he appreciated their function as working boats in the past and, instantly, felt connected to those whom had used them.

A challenging task for Rod in commencing the build was made easier by a chance encounter with local shipwright Bill Foster from Battery Point, Tasmania. Bill was an invaluable source of advice throughout the process and played an active part right up to the launch, assisting Rod in working out how to get her out of the backyard and over the roof of Rod’s home; something that he hadn’t put much thought into over the prolonged years of the build.

Billy was named after Rod’s father Bill and was launched at the Bellerive waterfront in June 2010 where as a young man, his father worked as a Tally Boy back in the day when produce was shipped across the river by boat. During the stepping of the mast, a gold sovereign given to Rod by his father was placed under the mast. Master rigger Anastasia Konstantinides had completed the rigging, so Billy was ready to sail.

After the launch, Billy was moored in the marina at Bellerive a suburb of Hobart, Tasmania and then moved to a mooring at Battery Point. Later, she was penned in a marina at the Prince of Wales Bay on the western shore of the Derwent River. In this time Rod and his family enjoyed some wonderful sailing on the Derwent; they would head downstream to South Arm and wait around there for the sea breeze, then enjoy a beautiful broad-reach or run back to Hobart.

Having tested his skills at both building and sailing Billy, Rod was ready for another challenge. In 2018, she was sold to Anouk and Neil Harding.

Custodians: Anouk and Neil Harding; 2018 – Present
Originally from Western Australia, one of the reasons Anouk and Neil moved to Hobart in 2011 from the west, was their passion for wooden boats. And after visiting the Wooden Boat Festival of that year they were determined that one day they would own one.

We love the simplicity of the Couta Boat, its history and tradition and after seeing Couta Boat Greta on a mooring at Coningham and then on an early morning kayak through the moorings at Cygnet and admiring the Couta Boat My Girls, our minds were made up; we were convinced that a Couta Boat was perfect.

In March 2018, the Hardings came across an advertisement for a Couta Boat for sale in Hobart. After contacting Rod, they couldn’t believe their luck upon seeing such a fine looking boat. They purchased Billy in March 2018.

We had thought we would have to purchase a Couta Boat from Victoria, not expecting there be anything of Billy’s calibre for sale in Hobart.

Former owner Rod Stirling was keen for Billy to remain in Hobart and the Hardings were more than happy to oblige. Rod, a true perfectionist, had some trouble letting go and made sure that everything was up to scratch before they could take custodianship.

Rod continues to have a vested interest in Billy, and in his annual shed clean out, finds bits and pieces left over from the build to pass on to the new custodians. He has also generously given them many photos of Billy taken during the building phase that give a real insight into the craftsmanship and dedication in taking on such a project.

Billy is berthed at Oyster Cove Marina which gives access to the D’Entrecasteaux Channel, an ideal location for sailing and fishing, for which the Couta Boat is renowned.