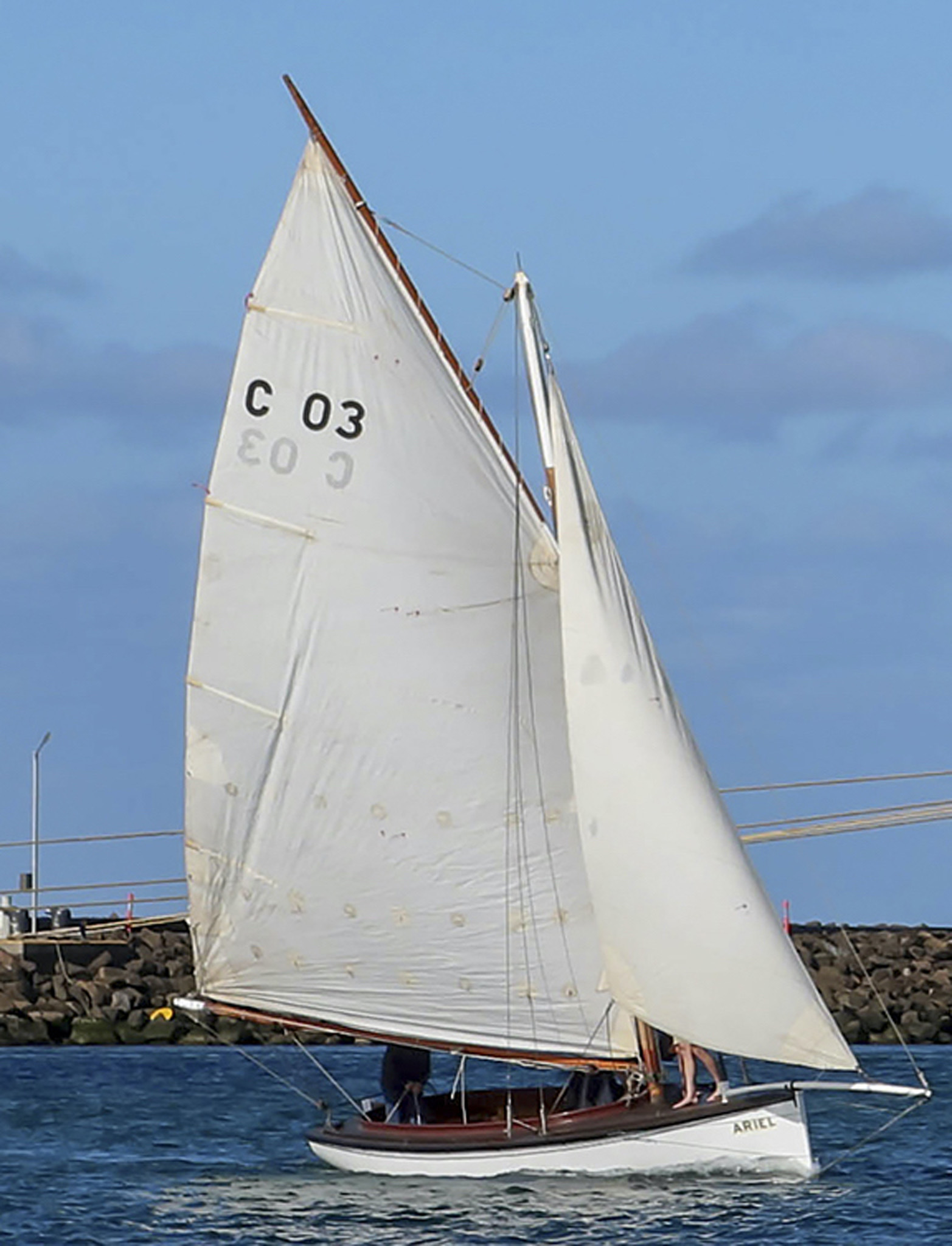 Custodian: Andrew and Charles Keiller; Late 1920s – 1930s
Ariel was built by JB Jones boatbuilders in Melbourne in 1927. She was built at a length of 26 foot for the Keiller brothers Andrew and Charles who were stevedores working on the waterfront at Portland on the south-west coast of Victoria.

After her construction, Ariel was shipped to Portland on the deck of the Casino, the Coastal Steamship that sailed and traded between Melbourne and Portland, serving the ports along the coastline.

Sheltered from the worst of the westerly gales, Portland Bay had once been the intermittent site of a whaling outpost from the early 1800s. The Henty brothers were the first permanent European settlers, arriving in 1834. As a relatively small settlement, remote from Melbourne there was more than sufficient supply of fish to be had within the bay or close to shore.

The railway came in 1876 opening up access to a larger market. But the growing port was still not suited to Couta Boats because it was open to the east and south east. Smaller boats could be lifted onto the pier if a blow was forecast, and larger vessels based on Cornish luggers could ride out the storm – but it was not ideal for a 26 foot open boat.

Accordingly, although the fishery was prospering, it was not until the harbour breakwater was completed in 1890 that the Couta Boat as we know it today became common in the port. One of the first was the centre-boarder Wanderer constructed by Henry Murray in 1891 and described as ‘first of her type and most seaworthy of the fishing fleet of Portland’.

In 1927, Jones built two boats from the same moulds for Portland owners. The Pilota was used by Alf Fredericks to ferry pilots to larger vessels entering the port. Ariel was utilized by the Keiller brothers to take passengers for day trips and excursions on Portland Bay. Her planking and ribs are of New Zealand Kauri, the keel and sternpost are of Western Australian Jarrah, while the stem is of Red Gum. She was fitted with bench seats along each side of the open cockpit for the sightseeing customers. Her jibboom was removed to make the task of coming alongside the jetty several times a day a bit easier.

Custodian: Jack Arkell; 1933 – 1973
Jack Arkell, a commercial fisherman from Portland, bought Ariel in 1933 and changed the gunter rig to the original Couta Boat lug-rigged main with its single halyard. This enabled him to work the boat single handed, which he did for 40 years.

As well as fishing for barracouta, Jack worked cray pots following the traditional method. He would always haul the pots by hand and unhook the ‘couta by ‘arming’ them, that is, swinging them under one arm and unhooking them with the other hand. He did not bother to use any unhooking rail or any other improvements.

He was an amazing ‘couta fisherman. He could really catch ‘couta. Very hard worker. Wiry, tough bloke. He could catch 20 dozen ‘couta to another bloke’s 10 or 15. He was quick. He armed them mostly. They didn’t even have unhooking rails then.

As was the custom, the Ariel was originally painted white, but Jack had tarred his dinghy, tar being a very economic and effective wood preserver. However, he got fed up with the black smudges it left rubbing against the white topsides, so he repainted the Ariel black.

For many winters, Portland and Port Fairy were the major centres for ‘couta fishing as the schools congregated to the west in the winter months, and the local fleet was often joined by fishermen from Queenscliff.

When Garry Kerr started as for’ard hand for John Sealey in 1961, there were less than half a dozen old style Couta Boats remaining in Portland, including Jack Arkell still working the Ariel. Garry recalls that Jack was still using the gear and methods he first used and learned when he started fishing.

Jack had never moved with the times, he fished in 1960 the way he’d fished in 1925, he had his dozen stick pots, as we call them. He fished under sail whenever he could, he had a little bit of a petrol motor which he used in a calm, and hand hauled his pots.

When Jack retired from fishing in 1972, the era of traditional ‘couta fishing at Portland came to a close.

In 1973, Jack sold the Ariel to another local Portland fisherman Jack McPherson who purchased the vessel in order to procure her cray licence. Within a few months he had transferred the licence to another vessel, so sold Ariel to Portland commercial fisherman, Garry Kerr who purchased her for recreational use, not for commercial fishing. He was motivated by a desire to preserve her heritage and ensure she remained in her home port.

Custodian: Garry Kerr; 1973 – 1979
When Garry Kerr purchased Ariel, she was in a rather rundown state and in need of restoration. As Garry had developed a keen interest in the history of Couta Boats through his friend, Bill Turner, he was intent on restoring her to her original condition; he was the first person to restore a classic, working Couta boat for recreational use.

For many years, Garry had observed old Jack Arkell sailing and fishing out of Ariel and believed that her heritage needed to be preserved as an intrinsic part of Portland’s maritime history. Garry owned Ariel for six years and restored her in this time. He continued to sail her with the traditional lug rig.

When Garry wrote his fishing book, ‘Craft and Craftsmen of Australian Fishing 1870 – 1970: An Illustrated Oral History’, he included a drawing of Ariel’s lines, drawn by courtesy of Bill Pell (p53). Subsequently, a number of model Couta Boats have been built from the lines of Ariel. The design featured in the book became the only easily accessible plan of Couta Boats until the revival in the late 1970s,

In the mid-1970s, Sorrento wooden boat enthusiast Tim Phillips’ interest in Couta Boats was heightened through reading another of Garry Kerr’s books, titled: ‘Australia and New Zealand Sail Traders’. In his search for these iconic vessels, Tim and his mate Richard Hodgkinson drove to Portland and sailed on Ariel, marking Tim’s first sail on a Couta Boat. In many ways the Ariel has been the inspiration for the revival and preservation of Couta Boats more generally.

Custodian: Roy Jennings; 1979 – 2006
In 1979, work and family commitments triggered Garry Kerr to sell Ariel. The new owner was another Portland identity, Roy Jennings. Although Roy was not a fisherman, his father and grandfather had fished out of Couta Boats.

Roy undertook some refurbishing of Ariel, including: replacing her deck, fitting a new centre-case and replacing the traditional lug rig with a gunter rig. Roy used her for sailing in the local waters and sailing as far as Port Fairy for the occasional regatta, and sleeping on board in the Moyne River while attending the folk music festival and the like.

In the transaction of Ariel to Roy, Garry Kerr had requested that in the event of Ariel being sold by Roy at any time, he was to be given first offer to repurchase her. And 27 years later, in 2006, Ariel was for sale.

Custodian: Garry Kerr; 2006 – Present
As Ariel was an integral part of Portland’s history, Garry formed a syndicate titled ‘Friends of Ariel’ who could share the work and pleasure of owning a Couta Boat, to preserve her heritage. In a fitting tribute to her longevity, they sailed and fished out of her for some years. However, due to changing circumstances among the crew, once again Garry has become the sole custodian of Ariel.

In 2013, Garry undertook the task of a major refit. She was taken to John Sealey’s shed and a team of expert craftsmen led by master boat builder Garry Stewart carried out the work, using traditional techniques. Deteriorated planks had new timber scarfed on; a new stem was fitted and she was completely refastened below the waterline. Garry Kerr affirms the importance of employing traditional techniques.

If you use the same technology and the same materials, you can preserve a boat true to its original design and build.

Ariel has a prominent place in Portland Harbour where she is berthed just inside the gate of the marina, with an interpretative plaque displaying her history. She is also listed in the ‘Australian Register of Historic Vessels’ on  the Australian National Maritime Museum website. From time to time, other commitments permitting, she can be seen sailing the waters of Portland Bay, just as she has for nearly one hundred years.

Ariel is a piece of Portland’s history. She needs to be kept here; this is her home.

Given Garry’s commitment to the preservation of Ariel, his authorship of various maritime books and his prolific knowledge of the fishing industry along the south-west coast of Victoria, Ariel is in safe hands. She is a constant reminder to locals and visitors alike, of the significant role the heritage Couta Boats have played in Portland’s maritime history.

Darcey, J. Verbatim transcript of an interview with Garry Kerr. In Oral history of the Australian fishing Industry of Victoria. (pp: 153-170). http://frdc.com.au/Archived-Reports/FRDC Projects/