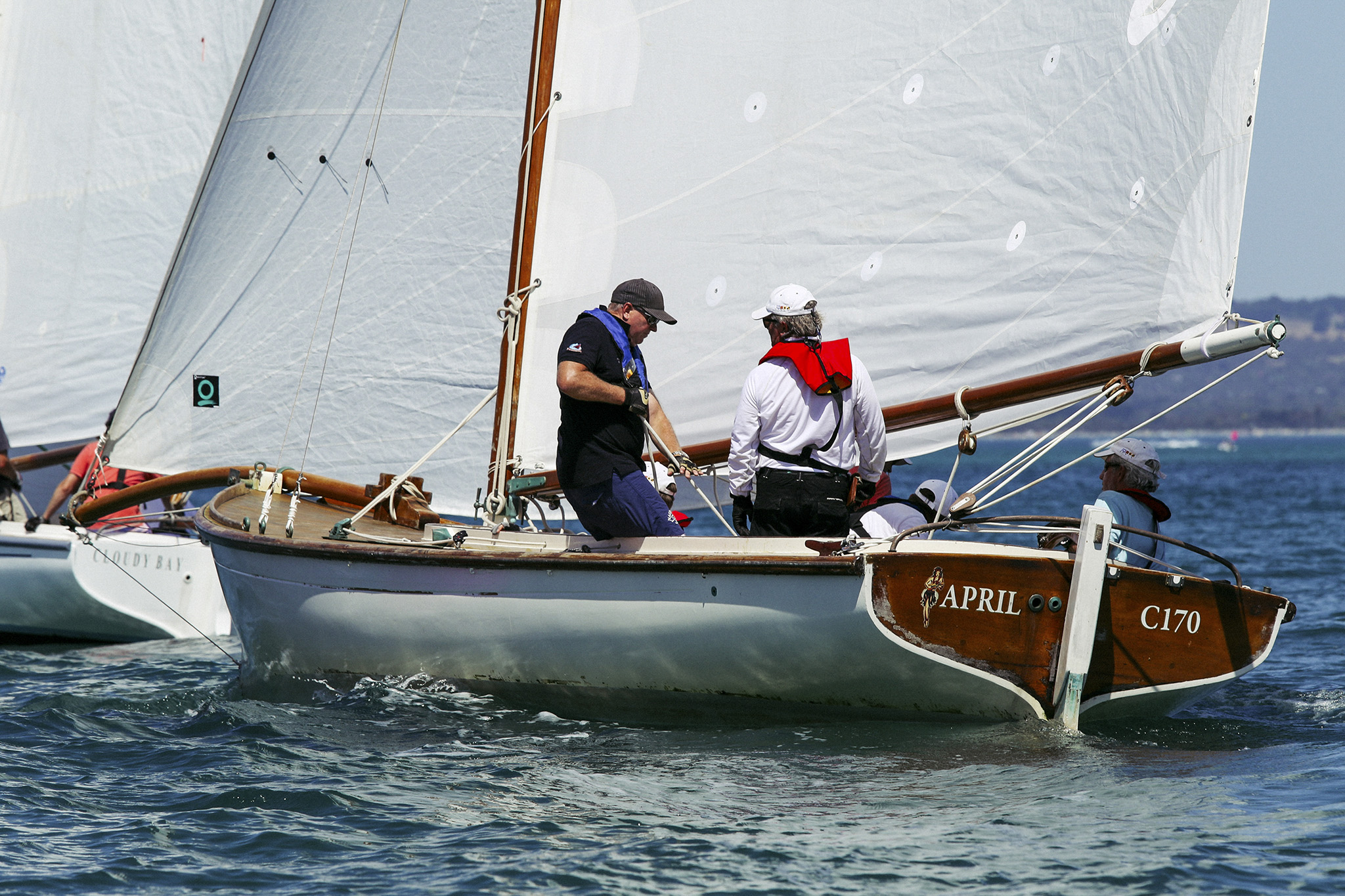 Custodian: Brett Almond; 1992 – 2000
April is a Lacco boat design that was built by Brett Almond at St Leonards on the Bellarine Peninsula, Victoria in 1992.

She was planked in Damarminyak Malaysian Kauri, with Merbau cockpit and forward floors. Stringers and extra floor timbers were fitted later to comply with Marine Board Standards.

Brett raced April out of Queenscliff for a few years, with great success. She regularly claimed a podium first in many races; she won the Club Aggregate out of Queenscliff Lonsdale Yacht Club and was runner-up in two Couta Boat Club, Season Aggregates in 1996 and 1997.

After Brett had finished racing April, he converted her into a charter boat for excursions on Port Phillip and took passengers out of Queenscliff for three years.

They sailed her for a couple of years, competing in all Division 1 races out of the then, newly amalgamated Sorrento Sailing Couta Boat Club (SSCBC). She was a great handicap contender.

In their time as custodians, April competed in the Geelong Festival of Sails Regatta held over the Australia Day weekend. The owners fully utilised April, sleeping on board and ensuring she was part of the onshore fun that this Regatta brings. At the time, April was painted black and was quite distinguishable amongst all the white boats. She was sold by the syndicate in 2003.

Custodian: Bernie Everett and David Reyne; 2006 – 2014
In 2006, April was acquired by Mornington locals Bernie Everett and David Reyne who purchased her from her then owner at Paynesville on the Gippsland Lakes in Victoria. The details of how April had come to this locale from Sorrento are unknown. Bernie Everett had sighted her at the Paynesville Wooden Boat Festival in an average state, but as a professional builder and with a love of timber boats, he saw potential in her.

April was transported to Mornington on the Mornington Peninsula, Victoria and home to a small fleet of Couta Boats. But before the new owners could become serious about racing her in the fleet, they needed to carry out some much needed maintenance and repairs. This included building a new rudder, replacing parts of the deck boards with Celery Top Pine and fitting a new floor.

Although the owners did not have extensive sailing experience, they were keen for April to compete in the local Couta Boat fleet. For the first five years they sailed her in the Mornington Yacht Club (MYC) twilight races, then in the summer season they regularly sailed her to Sorrento for the major Couta Boat Association (CBA) regattas. In 2009, April won 1st Handicap, Division 1, in the premier Portsea Cup.

On 3rd April 2008, April succumbed to a severe storm and was washed up on the beach, resulting in extensive damage. Portsea artist Jos Law did some art work using the damaged sail; it now hangs on Bernie’s wall.

Over the years when major breakages occurred, Bernie and David put their skills to work. After breaking the boom in one of the CBA races, Bernie built a replacement in his backyard whilst a broken mast was replaced at the Wooden Boat Shop, Sorrento. Despite the breakage, Bernie who is a keen surfer, declared:

Being out on the water was just fabulous, especially sailing April from Mornington to Sorrento … it was always a beautiful experience and different to surfing.

In time, the annual maintenance became a burden and so the decision was made to sell April. She was sold to another Mornington local Simon Lynch.

Custodian: Simon Lynch; 2014 – Present
Simon Lynch purchased April from Bernie and David in 2014 and since then she has been moored at the Mornington Yacht Club (MYC) on Port Phillip.

April is sailed every Thursday during the summer season at MYC in the twilight stern chaser, battling it out with Allure, Camilla Rose, Jessie, and Lincoln Rose. She also sails out of SSCBC where Simon is a member, participating in the annual KMPG event at Sorrento and in the winter series. In 2020, she sailed in the CBA Nationals held at SSCBC.