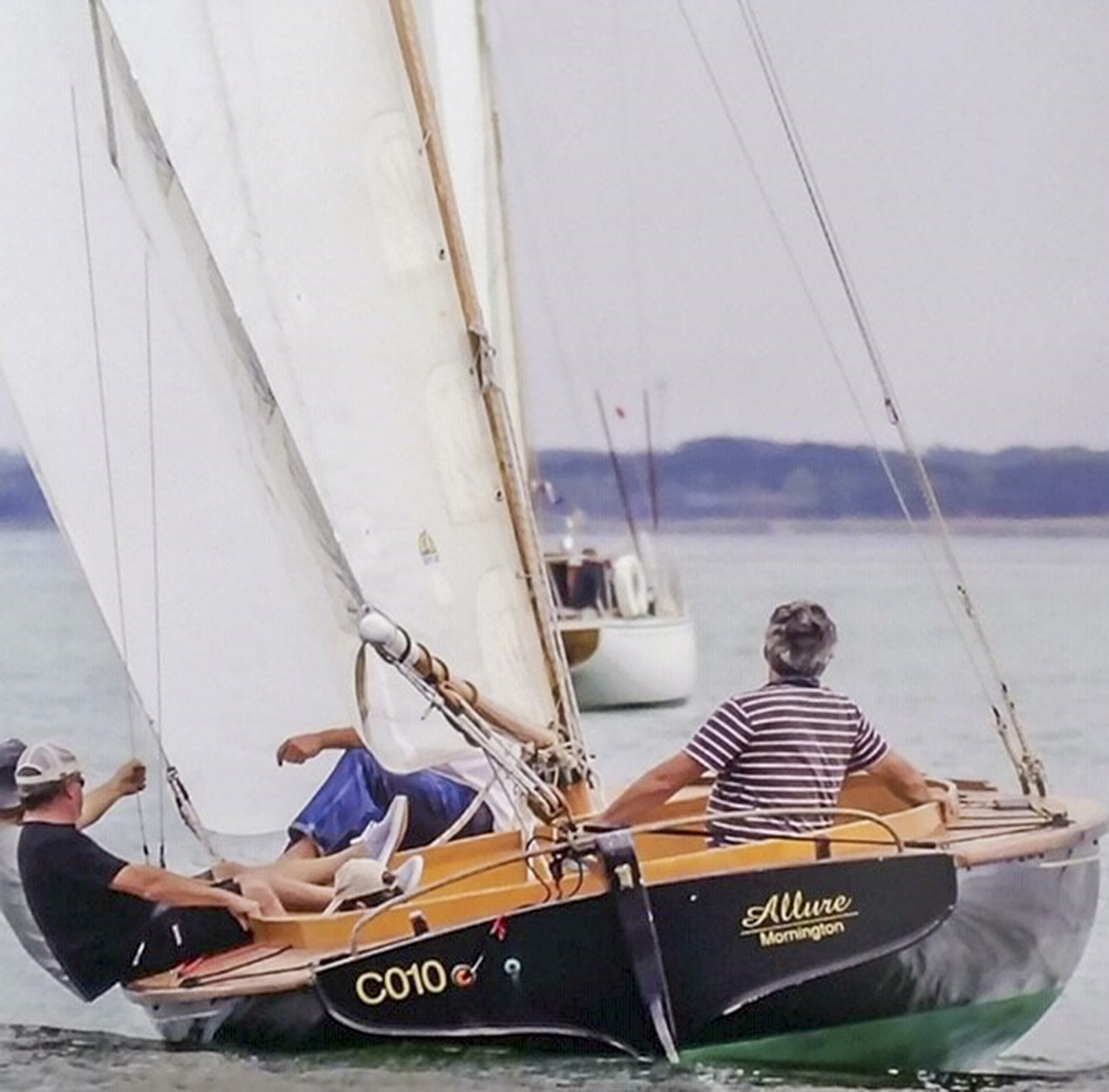 Allure C010 – the most ‘alluring’ of all the Couta Boats…

Her Creation:
The creation of Allure began after years of boat building discussions between Robert, a custom home builder and Gavin, a former boatbuilder. With a shared passion for fine woodworking and sailing, the Grey Iron Bark keel blank was purchased at the beginning of 2008 and the build began. Robert’s children played a part in the build, and it is their hope that the boat can continue to be a part of the family, through the generations.

Gavin’s early interest in boats involved building a Moth and a Gwen 12 as a teenager; he went on to study naval architecture to become a boat builder. When Robert met his father-in-law, Gavin, he could not believe his luck to find a kindred woodworking spirit. Eight years later, the boat building discussions evolved into action and the Iron Bark keel blank was purchased.

This father and son-in-law duo has been an interesting combination. Whilst the initial dream and concept was driven by Robert, the build was driven predominantly by Gavin, the woodworking extraordinaire, with Robert taking on the role of boat builder’s apprentice.

The boat building experience took woodworking to a new level for Robert, as a custom builder of fine homes and wine cellars.

Gavin’s previous life as a boat builder saw him do his time at Millcraft boats, building Illingworth Top Hats and Flying 15’s and later he set up in Seaford, Victoria with Mike Sutton as S & J Boat Building. There a young Tim Phillips approached Gavin to help restore his first Couta Boat, Helen, a 20 foot clinker. Mal Hart went through a boat building apprenticeship at this yard. S & J Boat Building went on to build designs around Lacco, Harrison Butler and Maurice Griffith designs. Since the completion and subsequent launch of Allure, Gavin can be found glued to the helm.

Her Name and Family Activity:
The name ‘Allure’ has a double meaning; she is very alluring to the eye and historically the Couta Boat was used to catch barracouta with a…lure.

Allure is a respected member of the Rolls family. From an early age, the Rolls children grew up watching her take shape and later helping shape her; playing in the wood shavings and sanding her hull. In more recent years Ciarn, Eamon, Kyah and Narah have spent time enjoying Allure in traditional fashion as a fishing boat, substituting squid for barracouta.

Gavin’s competitive streak surfaced one Thursday night during a twilight sail around the markers. On turn two he tacked and sailed back directly through the fleet on starboard. Being a traditional mid-week twilight race, many of the other boats were more competitive in the beer stakes and weren’t on lookout for a jibboom coming their way. This ended with a large hole in the forward hull of a 50 foot sloop, a broken jibboom and mast with the full rig coming down. Luckily both boats remained on the surface and the only injury was a broken rib and a dented ego.

Allure has attended the biennial Geelong Wooden Boat Festival since her launch, except for 2016 when she was being repaired from her twilight sailing mishap. The sail across from Mornington with an early start to Portarlington and the passage race down to Geelong is always enjoyed by all. Entering Corio Bay amongst a fleet of traditional wooden boats is always very alluring.

Dolphins also find her alluring as she sails on passage. They frolic and make their way through the bow wave as if they were her escort. One often wonders how similar this experience was with the earlier Couta Boats on returning with their catch.

The Match Maker:
In the romance stakes, Allure showed her colours early in the piece. Robbie and Yvette met on an evening sail. Surrounded by natural timber, some highly polished and others more natural in tones, they got to know each other. In fact, it is suggested they were so allured they forgot there was a crew on board at all. They are now happily married.

The Lady:
With her shapely curves she is undeniably female. Unlike the bird species where the male is often the good-looker, it is very different when it comes to boats, especially Couta Boats. Her under water shape is a sight to behold and is never fully exposed even on a tight sail to windward.

The Money Pit:
An initial budget was drawn up and soon overrun. A folder of receipts was kept and has still not been reconciled. Like any good family member they earn their keep but a financial spreadsheet outlining their cost would simply be inappropriate.

Her Future:
Children are brought up to fend for themselves and eventually make their own way in life. In Allure’s case, things are quite different; her owners hope she does not meet anyone and heaven forbid start her own family although there have been discussions about another build.

She is ours and very much a part of our immediate family.