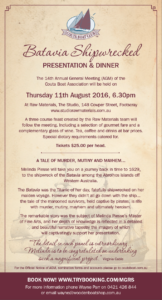 2. To receive the President’s Report.

3. To receive and consider the accounts of the Association for the year ended 31 March 2016 and the Treasurer’s Report.

5. Whether it is necessary to appoint an Auditor for the financial year ending 31 March 2017.

By order of the Committee of Management

Want to join the discussion?
Feel free to contribute!